— The Civil War in Missouri — 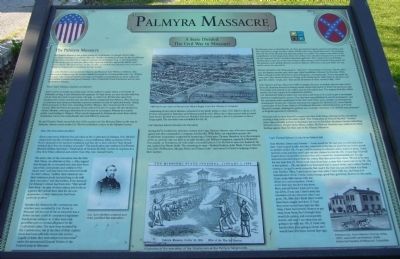 The Palmyra Massacre
The Palmyra Massacre was a grim ending to Confederate Col. Joseph Porter's 1862 recruiting campaign in northeast Missouri. Besides recruiting local men for the Confederate army, Porter attacked Union outposts and patrols all summer long. In Mid-September, Porter led his men to Palmyra, where they captured – and later apparently killed – a pro-Union citizen. The next month, on Oct. 18, 1862, 10 Confederate prisoners were executed at Palmyra's fairgrounds in retaliation for the murder.
Col. John McNeil commanded the Union's and Missouri State Militia in Palmyra. Also stationed in Palmyra was the Provost Marshal General for Northeast, Missouri, Col. William Strachan, who required known and suspected Southern sympathizers to swear oaths and post bonds to ensure their good behavior. One of Strachan's local informants was 60-year-old Andrew Allsman.

Porter Takes Palmyra, Captures an Informer
After a series of mostly successful raids, Porter suffered a major defeat at the Battle of Kirksville on Aug. 6 and disbanded his regiment. He kept about 300 – 400 recruits with 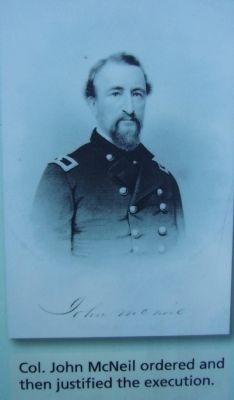 Click or scan to see
this page online
him, not far from his Lewis County home. On Sept 12, while Col. McNeil was away from headquarters, Porter and his men marched almost unopposed into Palmyra. They freed 45-50 prisoners and destroyed Strachan's provost marshal records of oaths and bonds. Taking three prisoners of their own, including Andrew Allsman, they returned north to Lewis County. With McNeil in hot pursuit, Porter ordered his men to scatter. He also decided to release Allsman, ordering a detachment of six men to accompany Allsman to a nearby public road leading to Palmyra. What exactly happened to Allsman has never been clearly established, but he was undoubtedly shot and killed by someone.
By mid-October Porter moved the last of his recruits over the Missouri River on the way to Arkansas. About a week earlier Col. McNeil published a notice in the Palmyra Courier demanding Porter return Allsman unharmed to his family within 10 days. If he failed to do so, 10 of Porter’s men jailed at Hannibal and Palmyra would be shot. When the 10 days passed with no word from Porter, McNeil directed Provost Marshal Strachan to compile a list of 10 prisoners to face a firing squad. The execution was scheduled for Oct.18.

Col. Strachan Selects Prisoners for Execution
Among the 10 Confederate prisoners chosen were Capt. Thomas Sidenor, one of Porter’s recruiting agents and who commanded a company 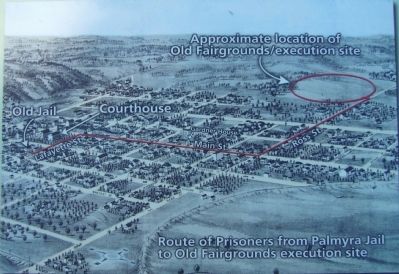 Photographed By Bill Kirchner, April 18, 2012
3. Palmyra Massacre Marker
at Kirksville; Willis Baker, an outspoken 54-year-old Confederate sympathizer suspected of murdering a Union man; Thomas Humston, at 19 the youngest of the 10, and the only one held as an oath-breaker; and William Humphrey, captured at Kirksville. Fortunately for Humphrey, his wife made a successful plea to Col. McNeil to spare her husband. He was replaced by Hiram Smith. The remaining six men – Herbert Hudson, John Wade, Francis Marion Lear, John McPheeters, Morgan Bixler and Eleazer Lake – had served in Porter’s campaign before their capture.
Shortly past noon on Saturday, Oct. 18, three government wagons arrived at the Palmyra jail. One carried four rough wooden coffins and the other two carried three each. The prisoners were led out of the jail and each man was seated on a coffin. The wagons were taken to the amphitheater of the fairgrounds, where the coffins were unloaded and placed in a row with the lids removed. About a hundred spectators gathered. After a prayer by a local Baptist minister, the 10 men sat on the foot of their coffins about 30 feet from the firing squad. All the prisoners were plainly dressed except for Sidenor, who wore a suit and a white vest – the suit he was to be married in.
Sidenor shouted to the firing squad to “aim here” and pointed to his heart. Shortly after 1 p.m. the Baptist minister gave each man a final 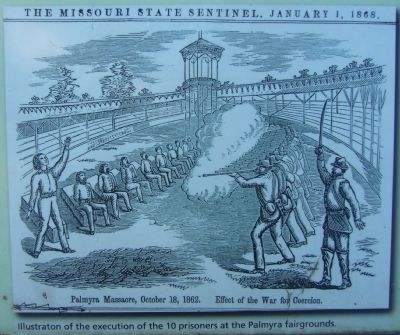 Photographed By Bill Kirchner, April 18, 2012
4. Palmyra Massacre Marker
handshake, followed by Strachan. Willis Baker refused to shake Strachan’s hand, telling him contemptuously, “Every dog shake his own paw.” Maj. Isham Dodson, in charge of the firing squad, called them to attention and gave the orders: “ready, aim – thus perish all traitors to their country’s flag – Fire!”
Only Sidenor and two others were killed outright. Six were wounded, and one man wasn’t hit at all. Strachan directed a backup squad armed with pistols to finish the gruesome task. The bodies were placed in the coffins and the lids nailed shut. The wagons took the coffins back to the town square to be claimed by relatives.
Col. McNeil left Palmyra before the executions and went to St. Louis to give a newspaper interview explaining his actions. The interview was published in several newspapers, and the executions were condemned in the New York Times and a number of international newspapers. To stop the criticism and show his support for McNeil, Col. Lewis Merrill, commander of the Union District of Northeast Missouri, relieved Strachan as Provost Marshal General, claiming the position was no longer necessary. Col. McNeil was promoted to Brigadier General of Volunteers.
Strachan took it upon himself to answer the New York Times criticism of the executions, sending a long letter to the editor titled “The Vindication of General 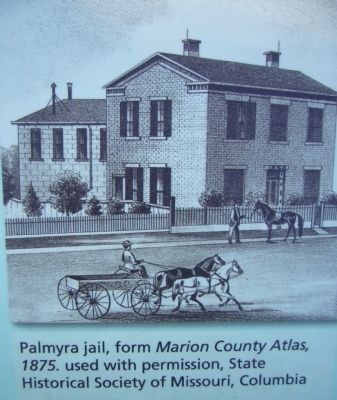 Photographed By Bill Kirchner, April 18, 2012
5. Palmyra Massacre Marker
McNeil.” Another letter (also probably written by Strachan) was sent to President Abraham Lincoln defending McNeil’s actions. Despite these efforts, neither McNeil nor Strachan ever outlived the bitter feelings against them for their part in the Palmyra Massacre.

Were The Executions Justified?
Great controversy followed the execution of the 10 prisoners at Palmyra. Gen. McNeil claimed the murder of Andrew Allsman, a non-combatant, while a prisoner of Col. Porter demanded the harshest retaliation and that the 10 men selected "had already forfeited their lives by violation of parole." This justification was reinforced by Provost Marshal William Strachan's "Vindication of General McNeil," written in response to a New York Times editorial and a letter from Maj. Gen. Samuel Curtis.
The main critic of the executions was the New York Times. An editorial on Dec. 1, 1862, argued that though the 10 executed men may have been "guerrillas, land pirates and outlaws of the basest sort," and may have even deserved death for their crimes, "neither their character nor their infamous deeds had anything to do with their execution" and that further, if the demand for Allsman's release had been met, "they would have lived – in spite of their crimes; and so far as appears they would have died for his non-appearance, if their characters had been perfectly spotless."
Another 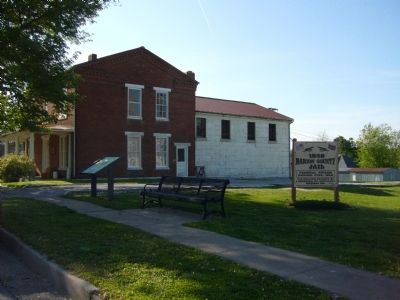 Photographed By Bill Kirchner, April 18, 2012
6. Palmyra Jail
Palmyra Massacre Marker is at left side of photo.
key element in the controversy was whether men recruited by Col. Porter in Missouri (all but one of the 10 executed was a Porter recruit) could be considered legitimate Confederate soldiers – or if they were only guerrillas with no formal allegiance to the Confederate army. The men were recruited by the Confederates, but at the time of their capture none had been officially sworn into service. Legally at least, they were subject to execution under the announced General Orders of the Federal army in Missouri.

Capt. Thomas Sidenor's Letter from Palmyra Jail
Dear Brother, sisters and Friends: -- I seat myself for the last time to write you a few lines. I am in good health, but alas, tomorrow is the day set apart for me to be carried to another world. Oh, I hope I will be received in Heaven where justice is done. I have not had a trail and they won't give me any chance for my life. Oh, I hope that God will forgive these unmerciful creatures that will commit the unpardonable act. To take innocent men and shoot them for crimes that they never have done. We are to be shot for one man that J. C. Porter took away from here, a man that I never saw in my life. Oh, is this justice?.... Oh, my mind is so frustrated that I cannot write, can't collect hardly a sentence, or spell a word correctly. But read it the best you can and think it is from your brother. Ellen, 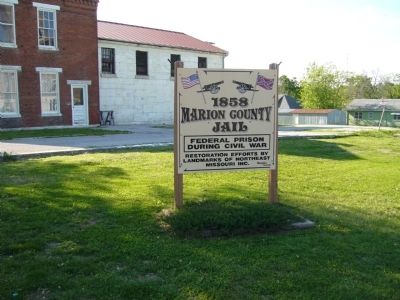 Photographed By Bill Kirchner, April 18, 2012
7. Palmyra Jail
I want you to have this valise I have with me, and keep it in remembrance of me. Frank, Lena, George, good-bye, good-bye, forever on this earth…I have some little money with me, divide it to suit yourselves. I find I won't have any use for it any more. Boys, you tell them I want you to pay my debts, if you can. I don't want any blemishes on my character after I am gone. Oh, little did I think that I would have been caught and shot. If I had they never would have kept me this long. I have had several chances to get away from them, but I thought they would do justice, and consequently stayed, and now I see what they are going to do with me. Oh, if I had only known they were going to shoot me I would have left them several days ago.


Topics and series. This historical marker is listed in this topic list: War, US Civil. In addition, it is included in the Missouri - A State Divided: The Civil War in Missouri series list. A significant historical month for this entry is September 1763.