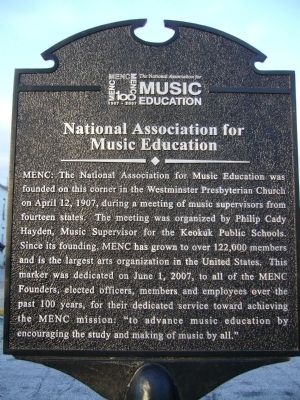 MENC: The National Association for Music Education was founded on this corner in the Westminster Presbyterian Church on April 12, 1907, during a meeting of music supervisors from fourteen states. The meeting was organized by Philip Cady Hayden, Music Supervisor for the Keokuk Public Schools. Since its founding, MENC has grown to over 120,000 members, and is the largest arts organization in the United States. This marker was dedicated on June 1, 2007, to all of the MENC founders , elected officers, members and employees over past 100 years, for their dedicated services toward achieving the MENC mission: "to advance music education by encouraging the study and making of music by all."

Erected 2007 by The National Association for Music Education.

Topics. This historical marker is listed in this topic list: Arts, Letters, Music. A significant historical date for this entry is April 12, 1907. 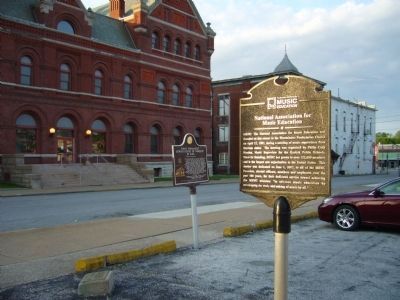 Click or scan to see
this page online
Street. Marker is on the northwest corner. Touch for map. Marker is in this post office area: Keokuk IA 52632, United States of America. Touch for directions.

Other nearby markers. At least 8 other markers are within walking distance of this marker. First Permanent Jewish House of Worship in Iowa (a few steps from this marker); The Estes House (approx. 0.2 miles away); Samuel Freeman Miller (approx. ¼ mile away); Mark Twain (approx. 0.4 miles away); Keokuk (approx. 0.4 miles away); Latter-day Saint Immigrants' Camp, 1853 (approx. 0.4 miles away); Welcome to Keokuk (approx. half a mile away); Water When Needed (approx. half a mile away). Touch for a list and map of all markers in Keokuk.
Credits. This page was last revised on June 16, 2016. It was originally submitted on May 16, 2012, by Bill Kirchner of Tucson, Arizona. This page has been viewed 558 times since then and 13 times this year. Photos:   1, 2. submitted on May 16, 2012, by Bill Kirchner of Tucson, Arizona. • Bill Pfingsten was the editor who published this page.
Share this page.