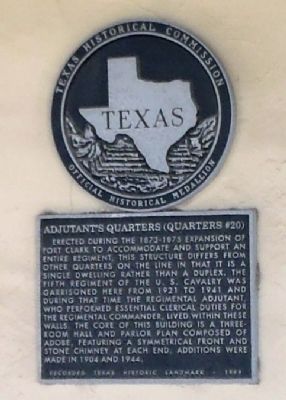 Photographed By William F Haenn, May 13, 2012
1. Adjutant's Quarters (Quarters #20) Marker
Inscription.
Adjutant's Quarters (Quarters #20). . Erected during the 1873-1875 expansion of Fort Clark to accommodate and support an entire regiment, this structure differs from other quarters on the line in that it is a single dwelling rather than a duplex. The Fifth Regiment of the U.S. Cavalry was garrisoned here from 1921 to 1941 and during that time the Regimental Adjutant, who performed essential clerical duties for the Regimental Commander, lived within these walls. The core of this building is a three room hall and parlor plan composed of adobe, featuring a symmetrical front and stone chimney at each end. Additions were made in 1904 and 1944. ,
Recorded Texas Historic Landmark – 1999. . This historical marker was erected in 1999 by Texas Historical Commission. It is Near Brackettville in Kinney County Texas

Erected during the 1873-1875 expansion of Fort Clark to accommodate and support an entire regiment, this structure differs from other quarters on the line in that it is a single dwelling rather than a duplex. The Fifth Regiment of the U.S. Cavalry was garrisoned here from 1921 to 1941 and during that time the Regimental Adjutant, who performed essential clerical duties for the Regimental Commander, lived within these walls. The core of this building is a three room hall and parlor plan composed of adobe, featuring a symmetrical front and stone chimney at each end. Additions were made in 1904 and 1944.

Topics. This historical marker is listed in this topic list: Notable Buildings. A significant historical year for this entry is 1921. 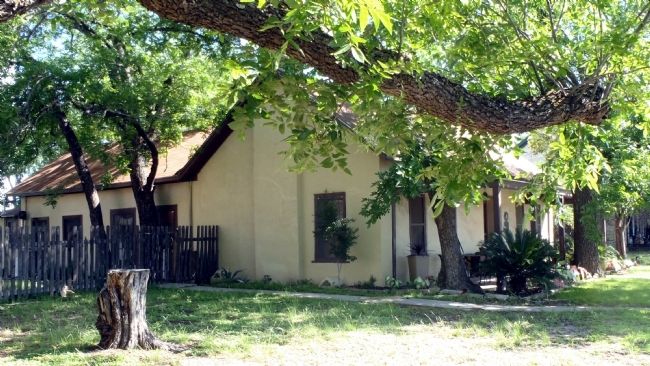 Click or scan to see
this page online
south. Marker is located on Fort Clark Springs in the Fort Clark National Register Historic District and is accessible to the public. Touch for map. Marker is at or near this postal address: 20 Colony Row, Brackettville TX 78832, United States of America. Touch for directions.

More about this marker. The subject of this marker is now a private residence.

Regarding Adjutant's Quarters (Quarters #20). To fill the vacant space between Quarters 18-19 and 21-22, a simple set of quarters (No. 20) was constructed of adobe, a readily available and inexpensive local material. The original floor plan was also simple, a single story with just three rooms and a fireplace on each end. This plan so closely mirrors the plan from the sets of Fort Clark's existing log officers' quarters constructed in 1854, that it may have been copied.

Occupancy of Quarters No. 20 in the nineteenth century was characterized by the distasteful practice, at least to officers' wives, of "turning 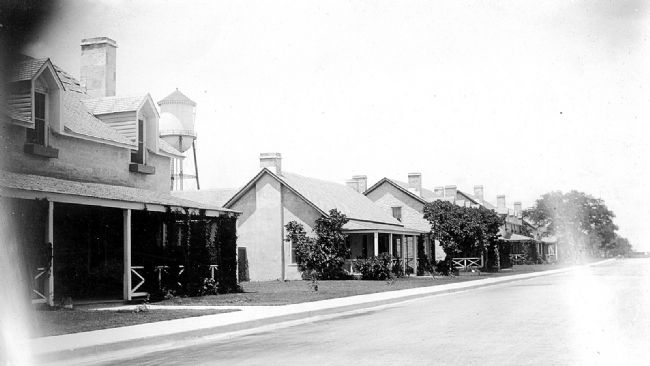 circa 1920s
3. Historic view of Fort Clark's Adjutanty's Quarters #20
In the foreground is Quarters No.21 with Quarters No.20 next in line. These quarters for company grade officers [Captains and Lieutenants] make up what was commonly referred to as “the line.” Note the window flower boxes, well manicured lawns, the light color paint [possibly the post color scheme recommended in 1928 of light gray, ivory cream and seal brown] and the decided absence of trees.
out" another officer to secure quarters. A senior officer, even by brevet rank, could force an officer junior to himself to relinquish a set of quarters simply on demand. The junior moved out, the senior moved in and the junior then looked for someone he outranked so he could continue the process. The ladies referred to the ordeal as "falling bricks," as it could at times cause wholesale moves, affecting an entire garrison. The diary and letters of Lieutenant Francis H. French, 19th Infantry, stationed at Fort Clark 1882-1888, make regular commentary on the experience. "Eckerson and I had to move out of our quarters to another set in order to make room for Payne, who was turned out by Vedder, who was turned out by Weeks, who was turned out by Hall." Lieutenant French was a bachelor officer while at Fort Clark and was little impacted by the practice. However, for a married officer it was a source of considerable frustration and complaint.

After decades of grievances from Army wives and the advent of long term, often permanent stationing of units at the same post following the First World War, the practice of "turning out" faded away. In its place developed the custom of designating or reserving a set of quarters for the officer assigned to a particular duty position. Traditionally the only designated quarters on a post was the house built for the Commanding Officer, always 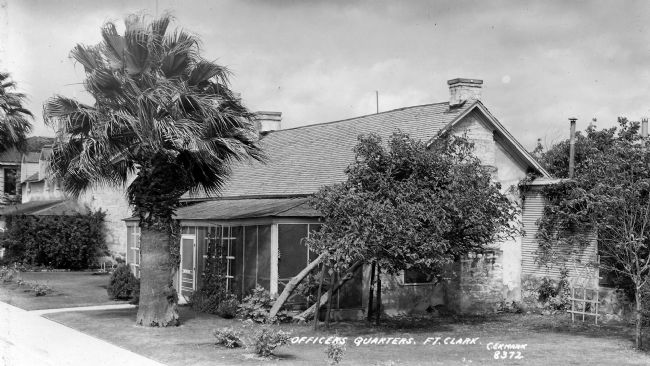 Photographed By Carl Ekmark, June 8, 1938
4. Historic view of Fort Clark's Adjutant's Quarters #20
the largest and best situated. Some posts also reserved quarters for staff officers (field grade officers in the rank of major or lieutenant colonel). At Fort Clark, Quarters 25-26 and 27-28 constituted "Staff Row" and later Quarters 23-24 was built to serve as staff officer quarters. Now the policy became standard and is still in use in the Army today.

In the Fall of 1921 the Fifth United States Cavalry Regiment conducted a permanent change of station from Camp Marfa to Fort Clark. In the quiet time between the World Wars the Fifth Cavalry became indelibly associated with Fort Clark, garrisoning the post for a generation, until 1941. During the Fifth Cavalry era several sets of quarters were designated to be occupied by officers assigned specific duty positions. Quarters No. 24 was designated for the Colonel of the Regiment and No. 20, only three doors away, for the Regimental Adjutant. The arrival of the First Cavalry Brigade Headquarters in early 1922 forced the 5th Cavalry Commander (then Colonel William Dennison Forsyth) to relinquish the Commanding Officer's House to the Brigade Commander (a general officer) and move (an event remembered by the Colonel's daughter, Mrs., Elizabeth Forsyth Scheuber, then seven years old) into the second best set of quarters on the post, Quarters No. 24 (second best based on size, quality of construction, and being protected from the weather by Quarters No. 23). From that point until the regiment departed, Quarters No. 24 was designated for the Colonel of the Fifth Cavalry Regiment. (The most prominent resident was Colonel George S. Patton, Jr. from July to November 1938).

The Regimental Adjutant was an unattractive position normally filled by a senior lieutenant or a junior captain. The Adjutant for all practical purposes was a glorified clerk for the Regimental Commander. However, the Adjutant did perform the essential function of managing the endless flow of regimental paperwork and keeping the Colonel out of trouble in that department. It was and still is a thankless job involving long hours of tedious attention to detail. Quarters No. 20 was then a fairly obvious choice for the Adjutant's house. It was in close proximity to the Colonel's house and otherwise had no other status or desirability due to its size and style. In 1994 Mr. David R. Hollingsworth and his sister, Mrs. Virginia H. Cunningham visited Fort Clark to participate in the Fort's Elderhostel Program. It was a homecoming since their father was an officer in the Fifth Cavalry and they spent their childhood, in the 1930's, at Fort Clark. When their father was the Regimental Adjutant they lived in No. 20. When he was reassigned to command a Troop they moved into Quarters No. 19.