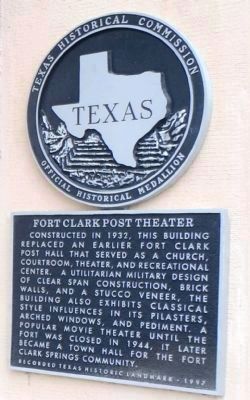 Photographed By William F Haenn, April 30, 2012
1. Fort Clark Post Theater Marker
Inscription.
Fort Clark Post Theater. . , Constructed in 1932, this building replaced an earlier Fort Clark Post Hall that served as a church, courtroom, theater, and recreational center. A utilitarian military design of clear span construction, brick walls, and a stucco veneer, the building also exhibits classical style influences in its pilasters, arched windows, and pediment. A popular movie theater until the fort was closed in 1944, it later became a town hall for the Fort Clark Springs community.,
Recorded Texas Historic Landmark - 1997. . This historical marker was erected in 1997 by Texas Historical Commission. It is Near Brackettville in Kinney County Texas

Constructed in 1932, this building replaced an earlier Fort Clark Post Hall that served as a church, courtroom, theater, and recreational center. A utilitarian military design of clear span construction, brick walls, and a stucco veneer, the building also exhibits classical style influences in its pilasters, arched windows, and pediment. A popular movie theater until the fort was closed in 1944, it later became a town hall for the Fort Clark Springs community.

Topics and series. This historical marker is listed in this topic list: Notable Buildings. In addition, it is included in the Art Deco series list. A significant historical year for this entry is 1932.

Location. 29° 18.302′ N, 100° 25.253′ W. Marker is near Brackettville, Texas, in Kinney County. Marker is at the intersection of Patton Road and Fort Clark Road, on the right when traveling east on Patton Road. Marker is located on Fort Clark Springs 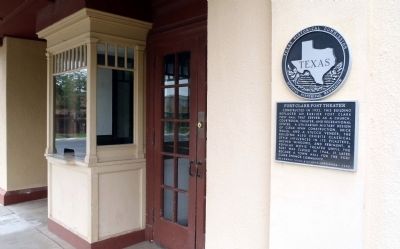 Click or scan to see
this page online
in the Fort Clark National Register Historic District and is accessible to the public. Touch for map. Marker is in this post office area: Brackettville TX 78832, United States of America. Touch for directions.

Regarding Fort Clark Post Theater. The post hose house, a small frame storage building for fire fighting equipment, occupied this site in the 19th century followed in the early 20th century by a Y.M.C.A. building and then a service club. Panoramic photos from the 1920’s show an outdoor screen behind the Service Club so the soldiers could experience “moving picture shows.” As the times changed the Army made a conscious effort to keep in step with American society by providing soldiers with modern recreation and entertainment facilities, often in a vain attempt to prevent the soldiers from patronizing the seedier establishments in Brackettville. To serve that noble purpose the Post Theater 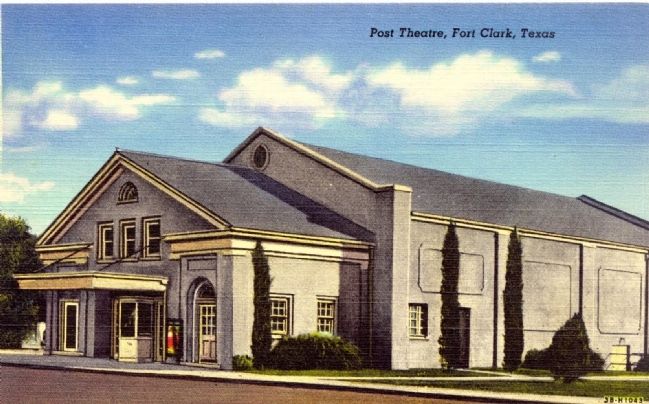 1930s
3. Fort Clark Post Theater Colorized Picture Postcard from the 1930s
was built in 1932. Its design is the classic “movie house” art deco style of the 1930s and it is the only steel frame structure built by the Army on the fort. The theater featured refrigerated air, compressed seaweed acoustical tile walls, and seating for over 400 soldiers. The 5th Cavalry band frequently played outside in the evening to attract troopers to the show. The theater served the garrison for only 12 years until Fort Clark quietly and unceremoniously slipped into history and out of active service on August 28, 1944, when the last soldiers departed. The Corps of Engineers served as caretakers until the venerable post was declared surplus and sold for salvage to the Texas Railway Equipment Company in October of 1946. The new civilian owners tore down the nearly 1,500 wood frame World War II buildings. However, through considerable foresight, the historic 19th and early 20th century structures and stone buildings were spared the wrecking ball. During the 1950’s and 60’s the Brown Foundation operated the grounds as the Fort Clark Guest Ranch and removed the theater’s projection equipment, screen, and seats. The floor was terraced but the stage area was retained. In 1971 the property was sold to a private developer who created a gated community and homeowners association, which operates today as the Fort Clark Springs Association. The Post Theater was renamed the 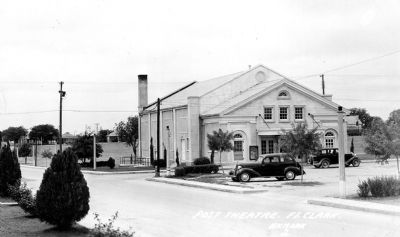 Photographed By Carl Ekmark, circa 1935
4. Historic view of the Fort Clark Post Theater
Town Hall and used for assemblies, dances, and theatricals, in fact everything but movies. The Post Theater was designated a Recorded Texas Historic Landmark in 1997 and is still in use for social events and by Fort Clark’s Old Quarry Society for the Performing Arts for stage productions.

The Recorded Texas Historic Landmark (RTHL) designation is awarded to historic structures deemed worthy of preservation for their architectural integrity and historical associations. Recorded Texas Historic Landmark is the highest honor the state can bestow on historic structures in Texas. Properties so designated are afforded a measure of legal protection and become part of the recorded history of the state’s built environment. Additionally, the Post Theater is a contributing structure to the Fort Clark Historic District, listed in the National Register of Historic Places December 6, 1979. 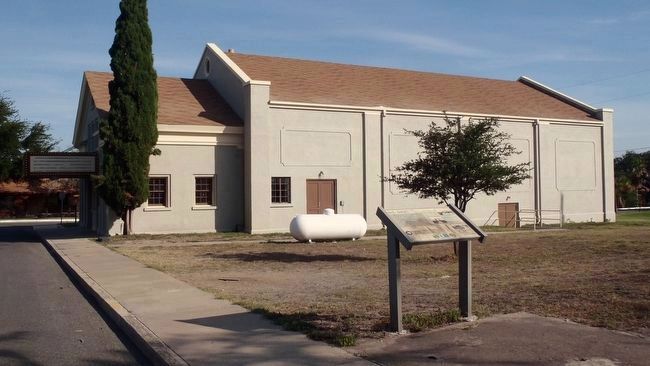 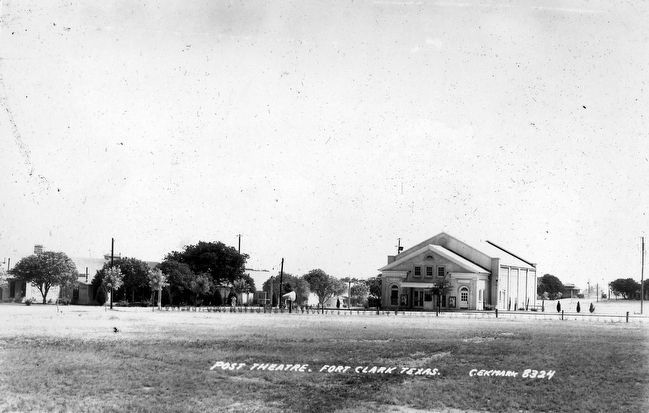