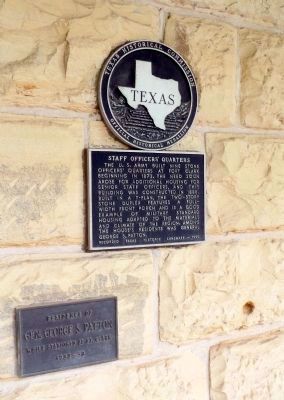 Photographed By William F Haenn, May 1, 2012
1. Staff Officers' Quarters Marker
(plaque)
Residence of
Gen. George S. Patton
while stationed at Ft. Clark
1937-38
Inscription.
Staff Officers' Quarters. . The U.S. Army built nine stone officers’ quarters at Fort Clark beginning in 1873. The need soon arose for additional housing for senior staff officers, and this building was constructed in 1888. Built in a T-plan, the two-story stone duplex features a full width front porch and is a good example of military standard housing adapted to the materials and climate of the region. Among the house’s residents was General George S. Patton. ,
Recorded Texas Historic Landmark - 1990. . This historical marker was erected in 1990 by Texas Historical Commission. It is Near Brackettville in Kinney County Texas

The U.S. Army built nine stone officers’ quarters at Fort Clark beginning in 1873. The need soon arose for additional housing for senior staff officers, and this building was constructed in 1888. Built in a T-plan, the two-story stone duplex features a full width front porch and is a good example of military standard housing adapted to the materials and climate of the region. Among the house’s residents was General George S. Patton.

Topics. This historical marker is listed in this topic list: Notable Buildings. A significant historical year for this entry is 1873.

Location. 29° 18.279′ N, 100° 25.445′ W. Marker is near Brackettville, Texas, in Kinney County. Marker is on Colony Row, 0.1 miles west of Fort Clark Road, on the right when traveling south. Marker is located on Fort Clark Springs in the Fort Clark National Register Historic District and is accessible to the public. Touch for map. Marker is at or near this postal address: 23-24 Colony Row, Brackettville TX 78832, United States of America. Touch for directions. 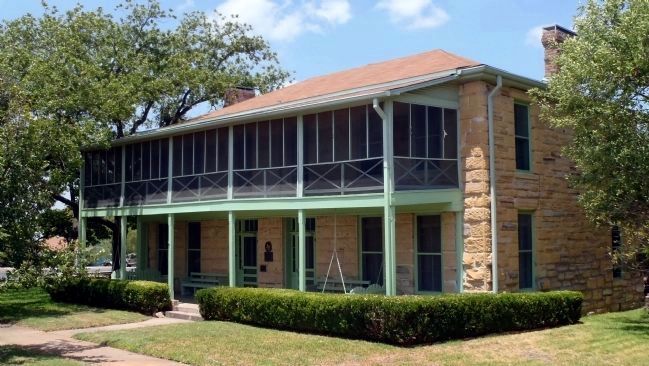 Regarding Staff Officers' Quarters. Staff Officers Quarters No.23-24 was built by the United States Army in 1888. This structure is constructed of local limestone and situated at the end of the line of company grade officer's quarters. Today, the property continues to fulfill its original intended purpose of family housing.

In the Fall of 1921 the 5th U.S. Cavalry Regiment conducted a permanent change of station from Camp Marfa to Fort Clark. In the quiet time between the World Wars the 5th Cavalry became indelibly associated with Fort Clark, garrisoning the post for a generation, until 1941. During the 5th Cavalry era several sets of quarters were designated to be occupied by officers assigned specific duty positions. The arrival of the 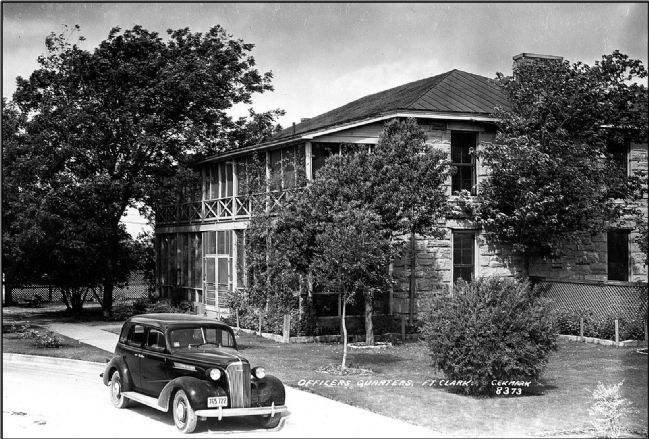 Photographed By Carl Ekmark, June 8, 1938
3. Historic view of Fort Clark's Staff Officers' Quarters
1st Cavalry Brigade Headquarters in early 1922 forced the 5th Cavalry Commander (then Colonel William Dennison Forsyth) to relinquish the Commanding Officer's House to the Brigade Commander (a general officer) and move (an event remembered by the Colonel's daughter, Mrs., Elizabeth Forsyth Scheuber, then seven years old) into the second best set of quarters on the post, Quarters No.24 (second best based on size, quality of construction, and being protected from the weather by Quarters No.23). From that point until the regiment departed, Quarters No.24 was designated for the Colonel of the 5th Cavalry Regiment.

These Quarters are named for General George S. Patton, Jr., the highest ranking officer to ever occupy them. Patton graduated from West Point in the Class of 1911 and in the summer of 1938 was assigned to command the 5th Cavalry Regiment at Fort Clark. Patton arrived at Fort Clark on July 24, 1938 and sent a note to his wife Beatrice of his initial impressions of his new duty station, "San Antonio is very quaint and I think you will like it ... [Fort] Clark is 138 miles due west ... I think we will like it. Gen J. [Joyce] runs the post and I run the regiment, which makes it very nice. The Joyces were delighted to see me and are more human than [they were] at [Fort] Myer ... All one can do here is to Ride-Read Write & Swim." Patton quickly set about preparing his 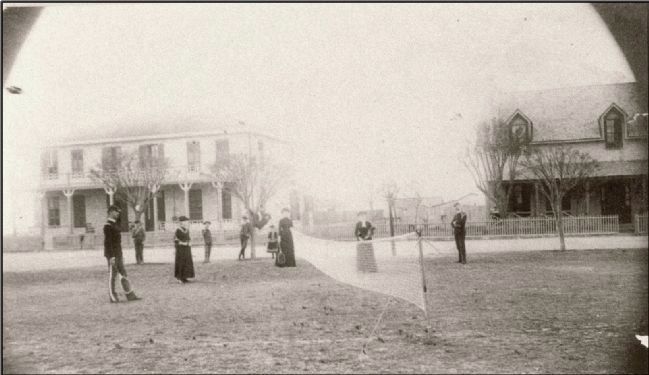 Courtesy Old Guardhouse Museum, circa 1889
4. 19th Century historic view of Staff Officers' Quarters 23-24
New staff officers’ quarters, with 2nd floor veranda, completed in 1888, stands prominently in the left background (the Patton House). A tennis court still occupies this site.
quarters for his family's arrival and again wrote Beatrice of his preparations, "[The house is beginning to look] swell. I had a new room built for a butler's pantry and bought a sink for it. I also am having the garden fenced with a 6-foot lattice fence, which should be finished by the end of September. All work here has to be done by soldiers. So as not to make them hate me I have them do the work on their own time and pay them for it." Patton enjoyed Fort Clark and its outdoor life, which restored him to health. On November 1, 1938 his hopes of remaining in Texas came to an abrupt close when, after only three short months at Fort Clark, the War Department reassigned him to replace Jonathan Wainwright [who came to Fort Clark] as commander of the 3rd Cavalry in Washington, D.C. 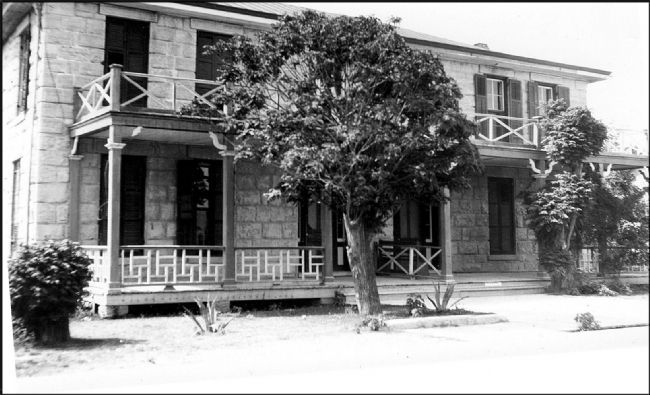