The University of North Carolina at Asheville 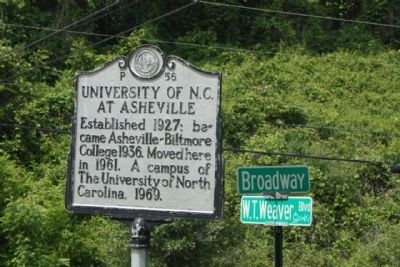 Erected 1976 by Division of Archives and History. (Marker Number P-56.)

Topics and series. This historical marker is listed in this topic list: Education. In addition, it is included in the North Carolina Division of Archives and History series list. A significant historical year for this entry is 1927.

Location. 35° 36.694′ N, 82° 33.973′ W. Marker is in Asheville, North Carolina, in Buncombe County. Marker is at the intersection of Broadway (State Highway 1791) and WT Weaver Blvd, on the right when traveling north on Broadway. Touch for map. Marker is in this post office area: Asheville NC 28801, United States of America. Touch for directions. 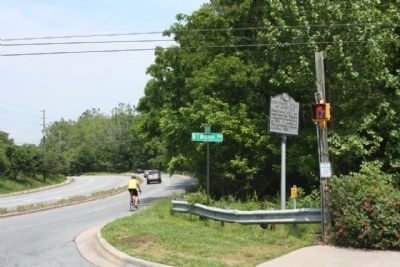 Photographed By Mike Stroud, May 19, 2012
2. The University of North Carolina at Asheville Marker seen along Broadway, looking north

Regarding The University of North Carolina at Asheville. The University of North Carolina at Asheville was established in 1927 as Buncombe County Junior College, under the auspices of the Buncombe County Board of Education. The college operated separately as a free public institution until 1930, when financial difficulties compelled administrators to begin charging tuition. The name of the school was changed to Biltmore Junior College. In 1934 the Board of Education relinquished its authority to a board of trustees, who obtained a charter under the name of Biltmore College. Control was passed again in 1936, this time to the Asheville City School Board. The institution then became Asheville-Biltmore College, although the name was not widely used for several years.

The General Assembly approved state support for the college in 1955, and when the same body provided for the community college system in 1957, Asheville-Biltmore College was the first institution to qualify as a 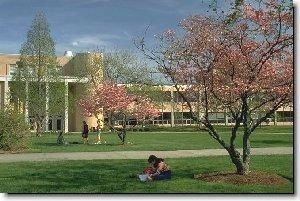