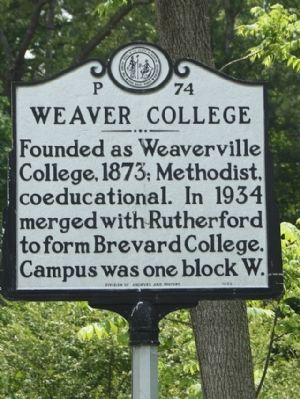 Photographed By Mike Stroud, May 19, 2012
1. Weaver College Marker
Inscription.
Weaver College. . Founded as Weaverville College, 1873; Methodist, coeducational. In 1934 merged with Rutherford to form Brevard College. Campus was one block W. . This historical marker was erected in 1992 by Division of Archives and History. It is in Weaverville in Buncombe County North Carolina

Founded as Weaverville College, 1873; Methodist, coeducational. In 1934 merged with Rutherford to form Brevard College. Campus was one block W.

Erected 1992 by Division of Archives and History. (Marker Number P-74.)

Topics and series. This historical marker is listed in this topic list: Education. In addition, it is included in the North Carolina Division of Archives and History series list. A significant historical year for this entry is 1873. 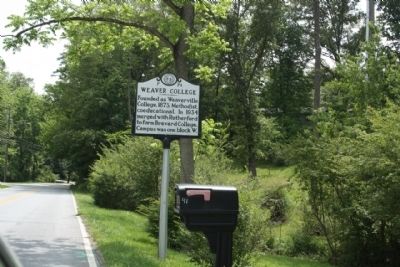 Regarding Weaver College. Weaverville College was chartered in 1873 to offer four years of college work. Prior to that time an academy, operated by the local Sons of Temperance beginning in 1851, stood on the site. Montreville Weaver contributed the land on which the first buildings were situated. Through gifts and purchases the campus grew to fifty-five acres. Initially the college was governed by a local board of trustees independent of any denomination. The school’s first president was Dr. James A. Regan. Only in 1883 was the property deeded to the Methodist Episcopal Church and the school placed under the supervision of the Western North Carolina Conference.

In 1912 the school was renamed Weaver College and the change made from four-year to junior college status. Preparatory classes continued to be offered. The college from the outset was coeducational. Student activities revolved around literary societies and the sports programs. Graduates of Weaver include North Carolina Chief Justice Walter H. Stacy, Congressman Zeb Weaver, and University of North Carolina Professor Hugh T. Lefler.

The Western North Carolina Conference decided in 1933 to merge Weaver College and Rutherford College to create a single coeducational Methodist junior college on the grounds of the old Brevard Institute. In the fall of 1934 thirty Weaver students and five faculty members moved to Brevard College. Today Brevard continues to preserve the earlier institutions through the Weaver Room of the library and plans for a Weaver College Bell Tower. In Weaverville three structures remain from the original campus, the 1874 Administration Building, now used as a Masonic Temple, and two dormitories.(North Carolina Office of Archives & History — Department of Cultural Resources)

Also see . . .  Dry Ridge: Some of it's History, Some of It's People. 1962 book by Nell Pickens on Amazon.com. The magnificent old buildings which once housed Weaver College are now mostly history. Only one or two are left standing on the beautiful property which was at one time a thriving college campus. You’ll find more in this book. (Submitted on October 3, 2012, by Virginia Gill Gambill of Hendersonville, North Carolina.)
Credits. This page was last revised on June 22, 2021. It was originally submitted on May 31, 2012, by Mike Stroud of Bluffton, South Carolina. This page has been viewed 636 times since then and 24 times this year. Photos:   1, 2. submitted on June 1, 2012, by Mike Stroud of Bluffton, South Carolina.
Share this page.