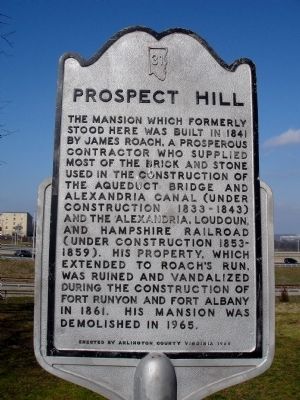 February 9, 2008
1. Prospect Hill Marker
Inscription.
Prospect Hill. . The mansion which formerly stood here was built in 1841 by James Roach, a prosperous contractor who supplied most of the brick and stone used in the construction of the Aqueduct Bridge and Alexandria Canal (under construction 1833-1843) and the Alexandria, Loudoun and Hampshire Railroad (under construction 1853-1859). His property, which extended to Roach’s Run, was ruined and vandalized during the construction of Fort Runyon and Fort Albany in 1861. His mansion was demolished in 1965. . This historical marker was erected in 1969 by Arlington County, Virginia. It is in Arlington in Arlington County Virginia

Topics. This historical marker is listed in this topic list: War, US Civil. A significant historical year for this entry is 1841.

Other nearby markers. At least 8 other markers are within walking distance of this marker. Fort Albany (a few steps from this marker); Site of Arlington Chapel 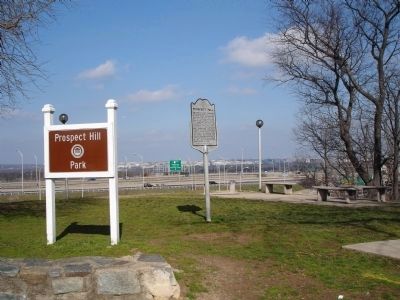