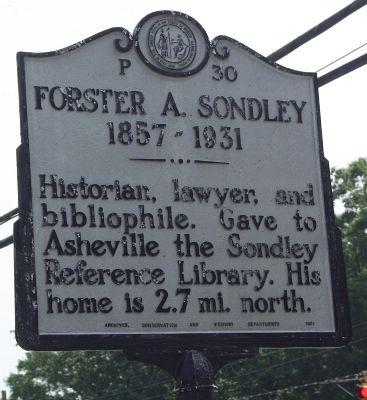 Photographed By Mike Stroud, May 19, 2012
1. Forster A. Sondley Marker
Inscription.
Forster A. Sondley. Historian, lawyer, and bibliophile. Gave to Asheville the Sondley Reference Library. His home is 2.7 mi. north. . This historical marker was erected in 1951 by Archives, Conservation and Highway Departments. It is in Asheville in Buncombe County North Carolina

Historian, lawyer, and bibliophile. Gave to Asheville the Sondley Reference Library. His home is 2.7 mi. north.

Topics and series. This historical marker is listed in these topic lists: Charity & Public Work • Education. In addition, it is included in the North Carolina Division of Archives and History series list.

Location. 35° 35.343′ N, 82° 30.015′ W. Marker is in Asheville, North Carolina, in Buncombe County. Marker is at the intersection of Tunnel Road (U.S. 70) and Beverly Road, on the right when traveling west on Tunnel Road. Touch for map. Marker is in this post office area: Asheville NC 28805, United States of America. Touch for directions. 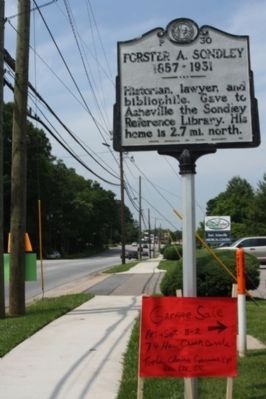 Regarding Forster A. Sondley. Foster A. Sondley, scholar and bibliophile, was born on August 13, 1857, at Montrealla, his grandmother’s home, in Alexander, a few miles north of Asheville. He was the youngest of Richard and Harriet Sondley’s six children. Sondley’s parents stressed proper education, and he attended several schools in the Asheville area before entering Wofford College in 1873.

After graduation in 1876, Sondley returned to Asheville to practice law. Admitted to the bar, he received his law license from the North Carolina Supreme Court in 1879. Sondley’s knowledge and abilities, coupled with his charismatic courtroom presence, garnered him a reputation as one of the most capable civil attorneys in the state. However, at the peak of his career in 1905, Sondley retired to pursue other interests, specifically his study of North Carolina history.

Widely read and expert in state history, Sondley served on the first North 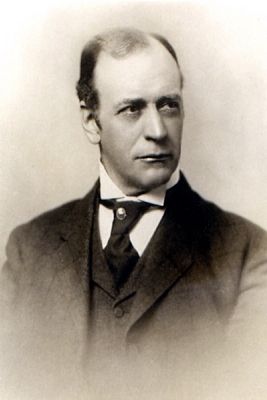 Photographed By Old Buncombe County Genealogy
3. Forester A. Sondley
Carolina Historical Commission in 1903, and fostered the development of the Buncombe County Historical Society. In 1911, Sondley moved to Finis Viae, a massive home built along Haw Creek near Asheville. At his new residence Sondley collected every document and artifact he could locate concerning North Carolina history.

A lifelong bachelor, Sondley held an estate which was broken up at his death and distributed among his nieces and nephews. However, Sondley left his library to the city of Asheville, and it formed the nucleus of the Sondley Reference Library at Asheville’s Pack Memorial Library.(North Carolina Dept. of Cultural Resources) 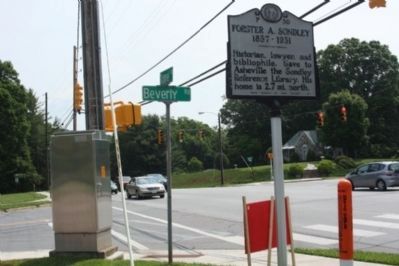