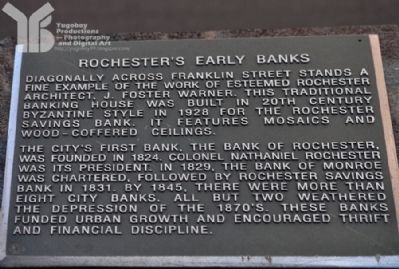 The city's first bank, The Bank of Rochester, was founded in 1824. Colonel Nathaniel Rochester was its president. In 1829, The Bank of Rochester was chartered, followed by Rochester Savings Bank in 1831. By 1845, there were more than eight city banks. All but two weathered the Depression of the 1870's. These banks funded urban growth and encouraged thrift and financial discipline. . This historical marker is in Rochester in Monroe County New York

Diagonally across Franklin Street stands a fine example of the work of esteemed Rochester architect J. Foster Warner. This traditional banking house was built in 20th century Byzantine Style in 1928 for the Rochester Savings Bank. It features mosaics and wood-coffered ceilings.

Topics. This historical marker is listed in these topic lists: Industry & Commerce • Man-Made Features. A significant historical year for this entry is 1928.

Location. 43° 9.479′ N, 77° 36.29′ W. Marker is in Rochester, New York, in Monroe County. Marker is at the intersection of Franklin St. and Liberty Pole Way, on the right when traveling south on Franklin St.. There are several other markers around, one on Main Street about the Liberty Pole, a 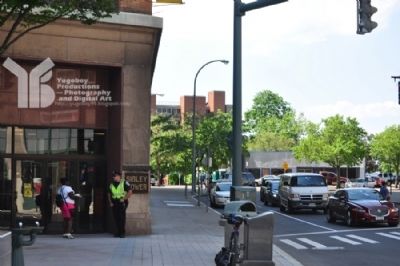 Click or scan to see
this page online
thin obelisk with support wires. If you visit during the holiday season, the Liberty Pole is lit up. Some cities have trees, Rochester has the Liberty Pole. Touch for map. Marker is in this post office area: Rochester NY 14604, United States of America. Touch for directions. 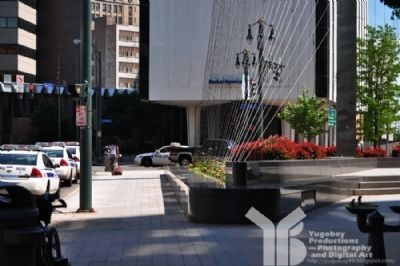 Photographed By Yugoboy, May 30, 2012
3. Rochester's Early Banks Marker, facing South
Notice the support wires and the (in this photo) grey rectangular shape to the right of this image. That is the lower portion of the Liberty Pole and its support system. In the lower right of the image is the Miss Jane Pittman Drinking Fountain. 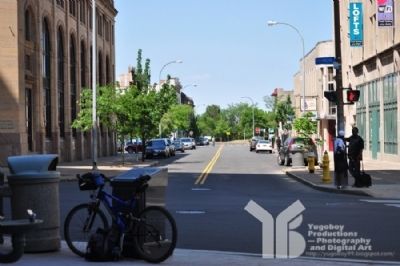 Photographed By Yugoboy, May 30, 2012
4. Rochester's Early Banks Marker, facing East
The street seen in this image is Liberty Pole Way. 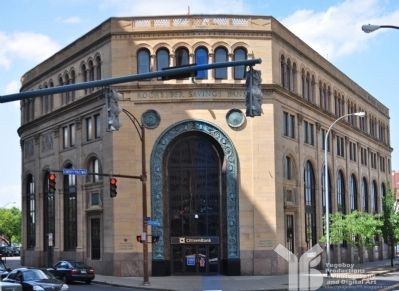