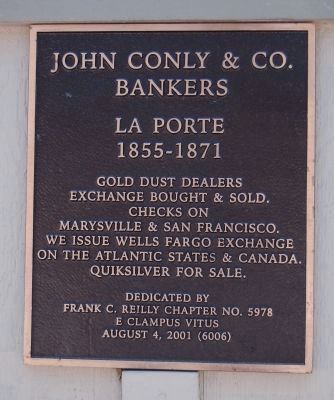 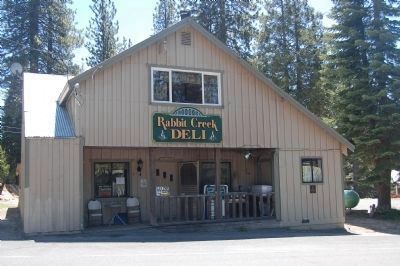 Photographed By Barry Swackhamer, May 29, 2012
2. John Conly & Co. Bankers Marker
The marker is mounted on the right of the front of the Rabbit Creek Deli building.

Click or scan to see
this page online
300 feet away, measured in a direct line); Emigrant Trail (about 300 feet away); Reilly’s Saloon (about 400 feet away). Touch for a list and map of all markers in La Porte.

Regarding John Conly & Co. Bankers. This was the site of the John Conly fireproof banking office built in 1858 and incorporated as the Bank of La Porte in 1871. Between 1868 and 1888, Wells Fargo & Company conducted business from this office. During this period, an estimated 10 tons of gold dust and bullion were shipped to the San Francisco Wells Fargo and Company headquarters for exchange and safe keeping. On three occasions, between 1878 and 1882, Charles E. Boles, a.k.a., Black Bart, robbed the La Porte to Oroville Wells Fargo and Company stagecoach. Located inside the Rabbit Creek Deli building are old pictures of La Porte, and the safe once used by the Wells Fargo Office.
Source: Walking Tour of La Porte
Credits. This page was last revised on June 16, 2016. It was originally submitted on June 12, 2012, by Barry Swackhamer of Brentwood, California. This page has been viewed 469 times since then and 52 times this year. Photos:   1, 2. submitted on June 12, 2012, by Barry Swackhamer of Brentwood, California. • Syd Whittle was the editor who published this page.
Share this page.