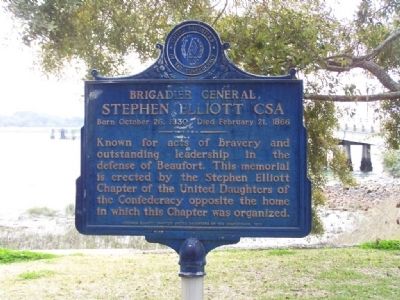 Known for acts of bravery and outstanding leadership in the defense of Beaufort. This Memorial is erected by the Stephen Elliot Chapter of the United Daughters of the Confederacy opposite the home in which this chapter was organized.

Erected 1968 by Stephen Elliott United Daughters of the Confederacy.

Location. 32° 25.836′ N, 80° 40.176′ W. Marker is in Beaufort, South Carolina, in Beaufort County. Marker is at the intersection of Bay Street and U.S. 21, on the right when traveling east on Bay Street. Marker and Memorial, at River's edge ( Beaufort River). Touch for map. Marker is in this post office area: Beaufort SC 29902, United States of America. Touch for directions. 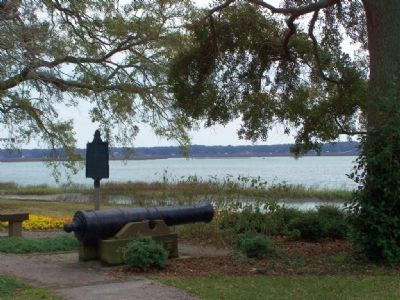 Additional commentary.
1. General Elliot
Stephen Elliott born in 1832, became Brig. General Elliott during the Civil War, serving the Confederacy at Fort Sumter and suffering several battle wounds at Petersburg. General Elliott died of his wounds, a year after the War, in Aiken S.C. while running for the Congress of the United States.

Brigadier General Stephen Elliott was one of Beaufort's most able military figures. Known for acts of bravery and outstanding leadership in the defense of Beaufort. He served as Lieutenant, and later, Captain, of the Beaufort 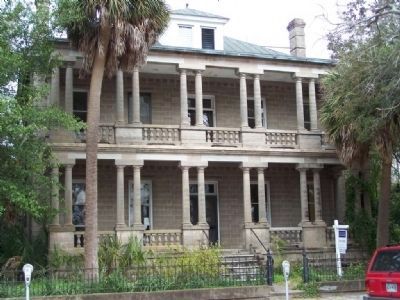 By Mike Stroud, February 21, 2008
3. One time U.D.C. House, mentioned in marker
Volunteer Artillery, which was based in the Beaufort Arsenal. Elliott served with the Palmetto Guards during the attack on Fort Sumter on April, 1861 and as a Brig. General was gravely wounded leading SC Troops at the Union mine explosion point during the Battle of the Crater in Petersburg, Va, July 30, 1864.

The United Daughters of the Confederacy of Beaufort, S.C. hold Stephen Elliott in high esteem. S.C. Chapter #1349 is named for him.
— Submitted February 22, 2008, by Mike Stroud of Bluffton, South Carolina.
2. Stephen Elliott
On the web, I found an excerpt in "Confederate Military History", Volume 5, page 390, that states Brig. General Stephen Elliott's birth year as 1832 and his death as March 21, 1866.

I am just beginning to research this ancestor of mine, so I am not saying this date is correct because I don't know. I'm just passing along the information.
Thank you.

Editor's Note: Thank you for your interest in the Historical Marker database, and for your information. It's difficult to tell sometimes why books and markers identify different birth and death dates for historic figures. The dates for this marker likely originated from General Elliot's grave marker (Saint Helenas Episcopal Churchyard, Beaufort, SC), which identifies 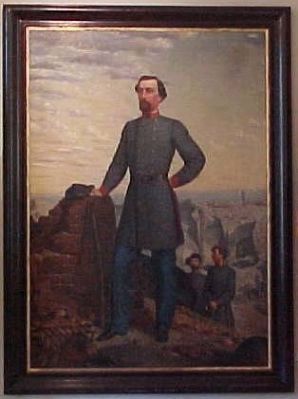