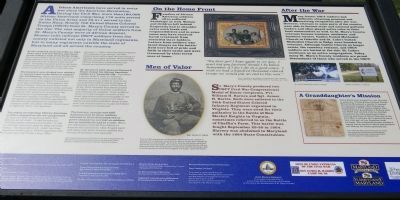 African Americans have served in every war since the American Revolution. During the Civil War, more that 180,000 African Americans comprising 170 units served in the Union Army and 29,511 served in the Union Navy. Nearly 700 United States Colored Troops (USCT) from St. Mary’s County served in the war. The vast majority of Union soldiers from St. Mary’s County were of African descent. Muster rolls indicate USCT soldiers from the county enlisted not only in Maryland regiments, but in many regiments outside the state of Maryland and all across the country.

At the outbreak of the Civil War in 1861, there were very few African Americans on the military rolls of the Union Army. The United States Navy continued to enlist Black seamen, but there was a quota and those who became regulars did menial labor. President Lincoln and his advisers believed that the regular Army and volunteers would be sufficient to win the war.

Marylanders were divided over whether to remain loyal to the Union or support the Confederacy. White landowners in St. Mary’s County and other Southern Maryland counties aligned themselves with the Confederacy. Throughout 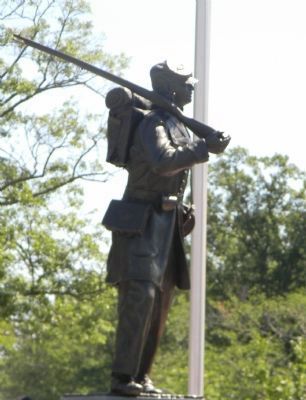 Click or scan to see
this page online
the United States, African Americans were eager to enlist in the Union Army and saw southern Whites and their sympathizers as traitors who wanted to overthrow the government to perpetuate slavery. Prominent leaders including Frederic Douglass and Robert Smalls appealed to the federal government to change the military laws and allow African Americans to fight for their own freedom.

The policy on enlisting African American soldiers changed as the war progressed. In July of 1862, Congress passed the Militia Act of 1862. It had become an “indispensable military necessity” to call on African American men to help save the Union. On September 27, 1862, the first regiment to become a USCT regiment was brought into the Union Army. After January 1, 1863, when the Emancipation Proclamation was issued, the War Department authorized the recruiting of African American soldiers. Recruitment efforts intensified and slave owners were offered monetary compensation for releasing enslaved men to enlist.

By the end of 1863, General Ulysses S. Grant viewed the African American soldier as a “powerful ally.” President Lincoln made it clear to military authorities and citizens alike that African American soldiers were to be accorded the rights and privileges of bearing arms in support of the Union Army. Both freemen and slaves joined the fight. In spite of harsh 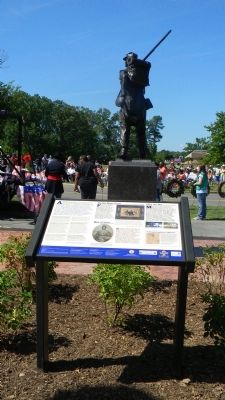 Photographed By Richard E. Miller, June 16, 2012
3. United States Colored Troops Civil War Memorial Monument and Marker
conditions and inadequate supplies, these soldiers went on to participate in some of the most important and brutal battles of the war. African Americans proved themselves as reputable soldiers many times over, yet discrimination in pay and other areas remained widespread.

The bravery, courage and skill demonstrated by these soldiers attested to their determination to prove themselves not just as soldiers but as individuals and as a race. When the liberated received the chance to become liberators, they fought hard and many lost their lives to uphold the virtues of freedom and equality.

Text drawn from sources including curriculum developed for the Maryland Department of Education by Reginald Lewis Museum of Maryland African American History & Culture.

On the Home Front
Families of African American soldiers often suffered hardships as well. Women and children left behind frequently had to shoulder extra work loads and responsibilities and in some cases may have received harsh treatment from resentful slave holders. Letters from soldiers who faced danger on the battlefield were full of pride and faith in their cause and were treasured by their loved ones at home.

[Photo of a Union soldier and his family] Courtesy The Library of Congress
“My dear girl, I hope again to see you. I 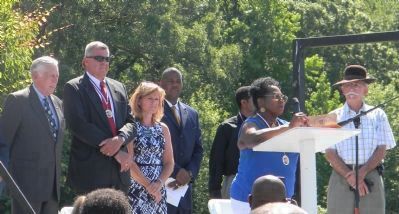 Photographed By Richard E. Miller, June 16, 2012
4. Community officials and UCAAC coordinators at the podium, June 16, 2012
- note Congressman Steny Hoyer at left; the monument's sculptor, Gary Casteel, far right; and Mrs. Idiola Shubrooks of the Unified Committee for Afro-American Contributions at the microphone.
must bid you farewell should I be killed. Remember, if I die, I die in a good cause. I wish we had a hundred thousand colored troops … We would put an end to this war.”
From The Mind of the Negro as reflected in Letters Written during the Crisis: 1800-1860. Carter G. Woodson, ed. 1926.

The Civil War experiences of Maryland’s African American soldiers in general and, in particular, those from St. Mary’s County were plagued by discrimination and hardship. But, by the time the last bullets were fired and all the dust had settled, the exertions and accomplishments of these tried and proven men represented a critical step towards the greater goal of social equality for which they struggled and fought. (Brennan Davis)

St. Mary’s County produced two USCT Civil War Congressional Medal of Honor recipients, Pvt. [later Sgt.] William H. Barnes and Sgt. James H. Harris. Both were enlisted in the 38th United States Colored Infantry Regiment organized in Virginia. They were cited for their gallantry in the Battle of New Market Heights in Virginia, sometimes referred to as the Battle of Chaffin’s Farm. This battle was fought September 29-30 in 1864. Slavery was abolished in Maryland with the 1864 State Constitution.

After the War
Many 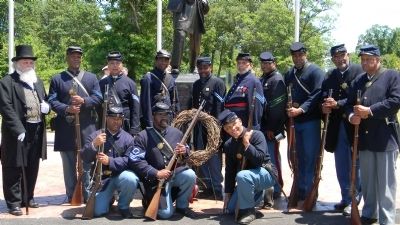 Photographed By Richard E. Miller, June 16, 2012
5. USCT Re-enactors at the United States Colored Troops Civil War Memorial dedication
former USCT soldiers had difficulty obtaining pensions and receiving recognition after the war. However, veterans in some parts of the country were able to become state and national political leaders and often played active roles in their local communities as well. In St. Mary’s County, veterans became teachers, ministers, and business owners. Galilee United Methodist Church in Oakville and St. Lukes United Methodist Church in Ridge were founded by veterans. Although Galilee Church no longer exists, the cemetery remains, and USCT soldiers are buried at the site. St. Luke’s continues as an active congregation. Today, many St. Mary’s County residents are proud descendants of those who served in the USCT.

[Photos of St. Luke’s Methodist Church in Ridge and Galilee Cemetery in Oakville]

Idolia Shubrooks worked for over 20 years to make the United States Colored Troops Memorial Monument a reality. It became her personal mission after finding her grandfather’s history with the USCT muster papers. She researched her grandfather’s history with the USCT and worked with the Unified Committee for Afro-American Contributions and Sons of Union Veterans of the Civil War to educate the community about this vital part of our forgotten local heritage. The completed project creates a legacy which serves to share and preserve our history 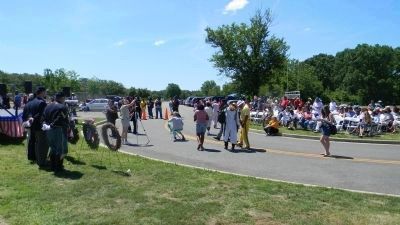 Erected 2012 by the Unified Committee for Afro-American Contributions (UCAC), and the James H. Harris Camp, Sons of Union Veterans of the Civll War (SUVCW), #38.

Topics and series. This historical marker is listed in these topic lists: African Americans • Patriots & Patriotism • War, US Civil. In addition, it is included in the Former U.S. Presidents: #16 Abraham Lincoln, and the Medal of Honor Recipients series lists. A significant historical date for this entry is January 1, 1905.

Other nearby markers. At least 8 other markers are within walking distance of this marker. Sergeant James H. Harris (here, next to this marker); United States Colored Troops (USCT) (a 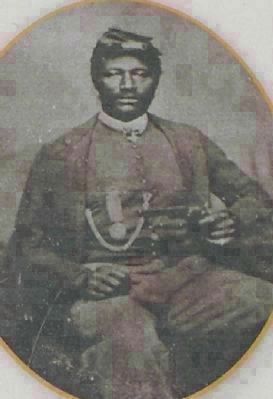 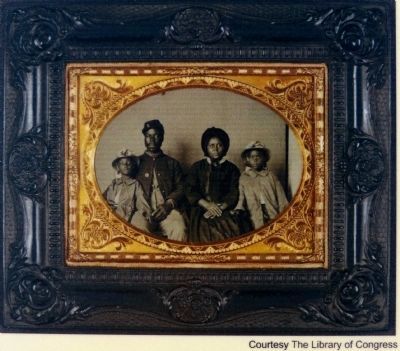 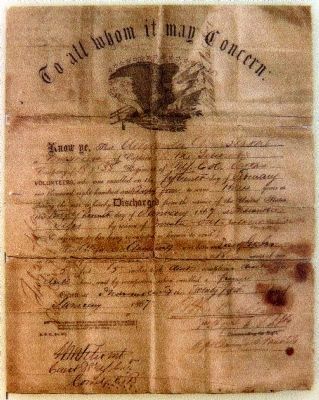 Photographed By Allen C. Browne, January 5, 2013
9. To Whom it may Concern....
Alexander Armstrong's USCT Muster Papers 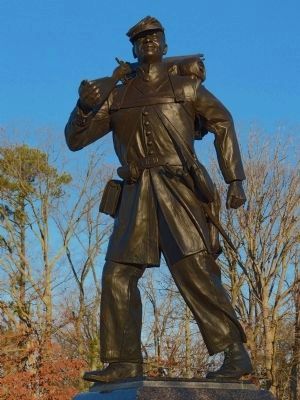 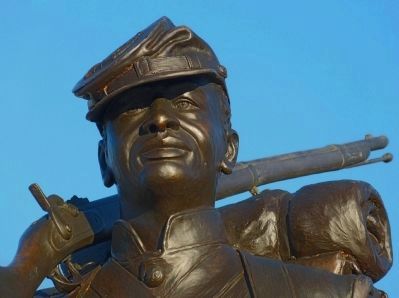