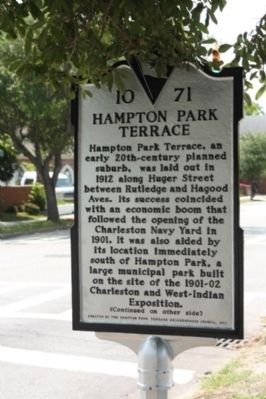 (Front text)
Hampton Park Terrace, an early 20th-century planned suburb, was laid out in 1912 along Huger Street between Rutledge and Hagood Aves. Its success coincided with the economic boom that following the opening of the Charleston Navy Yard in 1901. It was also aided by its location immediately south of Hampton Park, a large municipal park built on the site of the 1901-02 Charleston and West-Indian Exposition.
(Reverse text)
Developers praised “the open fresh beauty of Hampton Park Terrace” and called it “the ideal home overlooking both river and Park.” Most houses dates from 1912 to 1922 and include excellent examples of the American Foursquare, Colonial Revival, Prairie, Craftsman, and Bungalow styles. The Hampton Park Terrace Historic District was listed in the National Register of Historic Places in 1997. 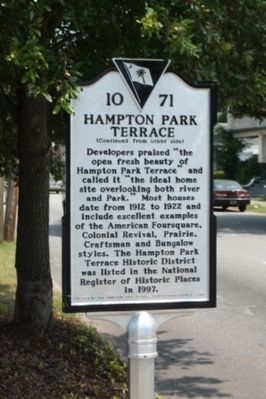 By Mike Stroud, June 19, 2012
2. Hampton Park Terrace Marker, reverse side
32° 47.93′ N, 79° 57.084′ W. Marker is in Charleston, South Carolina, in Charleston County. Marker is on Rutledge Avenue near Huger Street, on the right when traveling south. Touch for map. Marker is in this post office area: Charleston SC 29403, United States of America. Touch for directions. 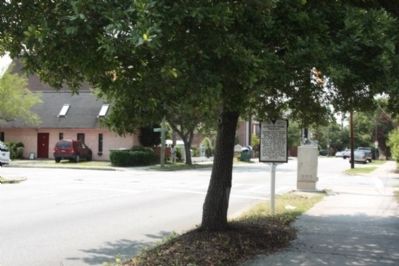 
Hampton Park Terrace Historic District is a planned residential subdivision on the northwest side of the peninsular city of Charleston. Hampton Park Terrace was laid out between 1911 and 1913, and by 1922 nearly 200 houses had been built. The cohesive architectural character of the neighborhood toady reflects not only the rapid pace of construction but also the cooperative development of the subdivision by a small group of investors and builders. Primary contributing resources include 218 dwellings and one park; there are also 64 contributing garages. Contributing resources were built between ca. 1910 and ca. 1945, with the great majority having been built between 1914 and 1922. Non-contributing properties were built after ca. 1945, or have lost their integrity of design and material through alterations and additions. Non-contributing resources in the district include 27 dwellings, 59 garages, one store and one church. A wide variety of house styles are located in the neighborhood, with variations on Prairie, Foursquare, Colonial Revival, Craftsman, and Bungalow styles. Listed in the National Register 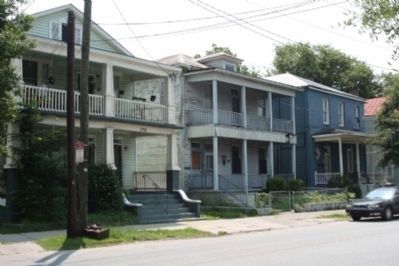