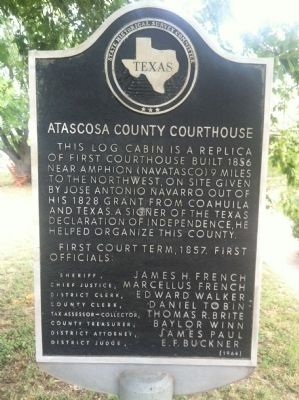 This log cabin is a replica of first courthouse built 1856 near Amphion (Navatasco) 9 miles to the northwest, on site given by Jose Antonio Navarro out of his 1828 grant from Coahuila and Texas. A signer of the Texas Declaration of Independence, he helped organize this county.

Location. 28° 55.111′ N, 98° 32.726′ W. Marker is in Jourdanton, Texas, in Atascosa County. Marker is at the intersection of Oak Street (State Highway 97) and Campbell Avenue, on the right when traveling east on Oak Street. Touch for map. Marker is in this post office area: Jourdanton TX 78026, United States of America. Touch for directions. 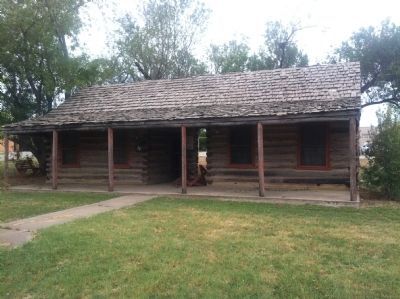 By John A Hensarling, June 21, 2012
2. Replica of first Atascosa County Courthouse
other markers are within walking distance of this marker. Atascosa County (about 300 feet away, measured in a direct line); a different marker also named Atascosa County Courthouse (about 400 feet away); Martin Abstract Company (about 500 feet away); Jourdanton United Methodist Church (approx. 0.2 miles away); Old Atascosa County Jail (approx. 0.2 miles away); St. Matthew Catholic Parish (approx. ¼ mile away); Mercy Hospital (approx. 0.7 miles away); Jourdan Campbell (approx. 0.7 miles away). Touch for a list and map of all markers in Jourdanton.
Credits. This page was last revised on February 28, 2019. It was originally submitted on June 21, 2012, by John A Hensarling of Campbellton, Texas. This page has been viewed 495 times since then and 13 times this year. Photos:   1, 2. submitted on June 21, 2012, by John A Hensarling of Campbellton, Texas. • Bernard Fisher was the editor who published this page.
Share This Page.