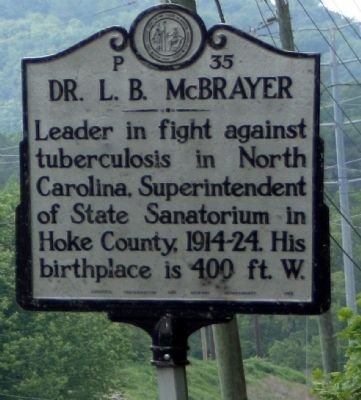 By Mike Stroud, May 19, 2012
1. Dr. L.B. McBrayer Marker
Inscription.
Dr. L.B. McBrayer. .
Leader in fight against tuberculosis in North Carolina, Superintendent of State Sanatorium in Hoke County, 1914–24. His birthplace is 400 ft. W.. . This historical marker was erected in 1952 by Archives, Conservation and Highway Departments. It is in Bent Creek in Buncombe County North Carolina

Leader in fight against
tuberculosis in North
Carolina, Superintendent
of State Sanatorium in
Hoke County, 1914–24. His
birthplace is 400 ft. W.

Location. 35° 30.475′ N, 82° 35.867′ W. Marker is in Bent Creek, North Carolina, in Buncombe County. Marker is on Brevard Road (State Highway 191) near Bent Creek Ranch Road, on the right when traveling north. Touch for map. Marker is in this post office area: Asheville NC 28806, United States of America. Touch for directions. 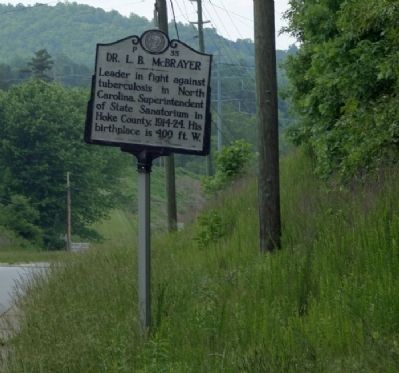 Regarding Dr. L.B. McBrayer. Louis Burgin McBrayer, physician and tuberculosis specialist, was born on December 27, 1868, the only child of Adolphus and Lou A. Case McBrayer. As a young boy he attended Venable School and Newton Academy in
Asheville, as well as Judson College in Hendersonville. After finishing high school, McBrayer entered Louisville Medical College in Louisville, Kentucky, where he received the M.D. degree in 1889.
After his graduation from medical school, McBrayer returned to North Carolina, operating a general practice in Asheville until 1914. He also served as Buncombe County coroner from 1901 to 1907, and the Asheville heath officer from 1910 to 1914. He operated as chief surgeon at Asheville’s Mission Hospital and for the Southern Railway. Considered one of the finest physicians in North Carolina, from 1908 to 1914, McBrayer was president of the State Board of Medical Examiners.

The effects of tuberculosis intrigued McBrayer during his time in Asheville. Determined to help in fighting the disease, McBrayer took a post in April 1914 as superintendent of the North Carolina State 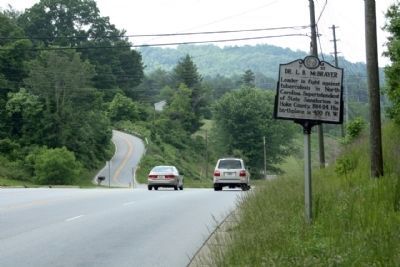 By Mike Stroud, May 19, 2012
3. Dr. L.B. McBrayer Marker, looking northwest along Brevard Road NC Route191
Sanatorium in Hoke County, and as head of the Bureau of Tuberculosis inside the State Board of Health. He held the positions for the next ten years, before moving to Southern Pines. He served as head of the North Carolina Medical Society beginning in 1915, and backed the incorporation of Hospital Savings Association as a Blue Cross plan in 1935.

McBrayer married Lillian Cordelia Deaver on July 20, 1890, and they had three children: Reuben Adolphus, Sadie Lou, and Louis Burgin II. Before his death on April 1, 1938, McBrayer served as chairman of the board of trustees for the Order of Odd Fellows orphanage in Goldsboro, as well as grand marshall of the Sovereign Lodge in 1934. McBrayer also dabbled in genealogy, coauthoring McBrayer Genealogy with Mrs. Charles R. Whitaker in 1926. He is buried at Bethesda Cemetery in Aberdeen.(North Carolina Dept. of Cultural Resources)