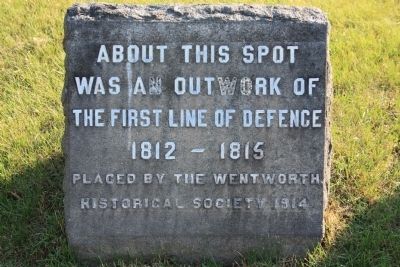 Photographed By Dale K. Benington, June 10, 2012
1. Defensive Outwork Marker
Inscription.
Defensive Outwork. .
About this spot was an outwork of the first line of defense 1812 - 1815. . This historical marker was erected in 1914 by Wentworth Historical Society. It is in Burlington Heights in Hamilton Ontario

Topics. This historical marker is listed in these topic lists: Forts and Castles • War of 1812. A significant historical year for this entry is 1812.

Location. 43° 16.202′ N, 79° 53.226′ W. Marker is in Burlington Heights, Ontario, in Hamilton. Marker can be reached from York Boulevard north of Dundurn Street North. This historic marker is located in the Hamilton Cemetery, along the west side of one of the cemetery roadways, on a slight rise in the road. Touch for map. Marker is at or near this postal address: 555 York Boulevard, Burlington Heights ON L8R, Canada. Touch for directions. 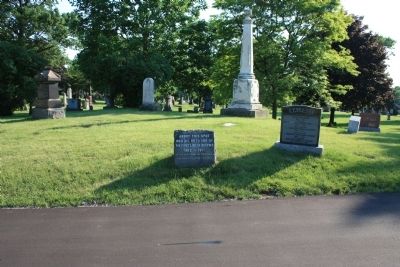 Photographed By Dale K. Benington, June 10, 2012
2. Defensive Outwork Marker
View of the historic marker on the side of a roadway through the Hamilton Cemetery. 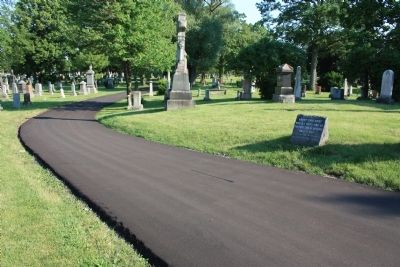 Photographed By Dale K. Benington, June 10, 2012
3. Defensive Outwork Marker
View looking south of the historic marker, on a slight rise, on the side of a roadway, in the Hamilton Cemetery. 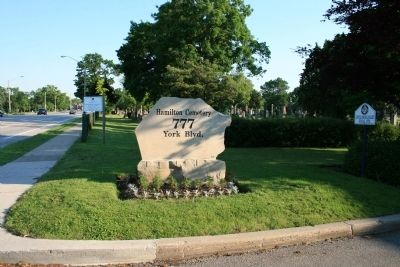