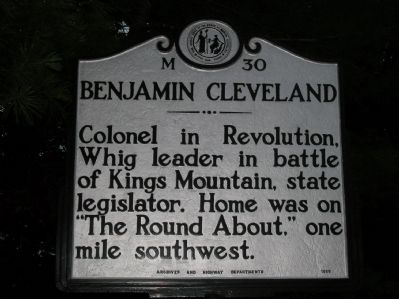 Photographed By Michael C. Wilcox, June 25, 2012
1. Benjamin Cleveland Marker
Inscription.
Benjamin Cleveland. . Colonel in Revolution, Whig leader in battle of Kings Mountain, state legislator. Home was on "The Round About," one mile southwest. . This historical marker was erected in 1955 by NC Archives and Highway Departments. It is in Ronda in Wilkes County North Carolina

Colonel in Revolution, Whig leader in battle of Kings Mountain, state legislator. Home was on "The Round About," one mile southwest.

Topics and series. This historical marker is listed in these topic lists: Government & Politics • War, US Revolutionary. In addition, it is included in the North Carolina Division of Archives and History series list.

Location. 36° 13.12′ N, 80° 56.63′ W. Marker is in Ronda, North Carolina, in Wilkes County. Marker is at the intersection of Elkin Highway (State Highway 268) and Chatham Street, on the left when traveling west on Elkin Highway. Touch for map. Marker is in this post office area: Ronda NC 28670, United States of America. Touch for directions.

Other nearby markers. At least 8 other markers are within 7 miles of this marker, measured as the crow flies. Richard Allen, Sr. (approx. 3.4 miles away); Stoneman's Raid (approx. 3½ miles away); The Kings Mountain Campaign of 1780 (approx. 5.1 miles away); Surry County Muster Site (approx. 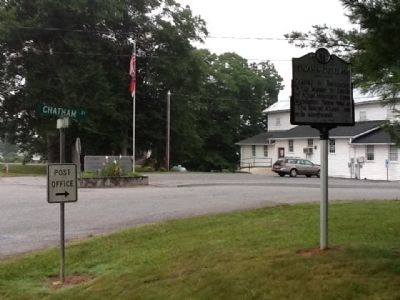 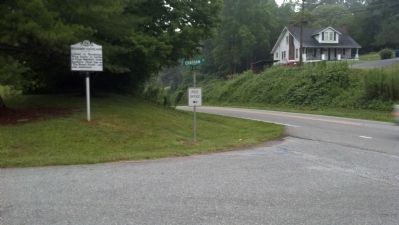