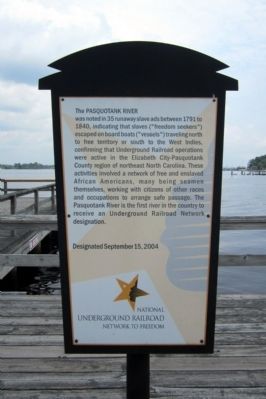 The Pasquotank River was noted in 35 runaway slave ads between 1791 to 1840, indicating that slaves (“freedom seekers”) escaped on board boats (“vessels”) traveling north to free territory or south to the West Indies, confirming that Underground Railroad operations were active in the Elizabeth City-Pasquotank County region of northeast North Carolina. These activities involved a network of free and enslaved African Americans, many being seamen themselves, working with citizens of other races and occupations to arrange safe passage. The Pasquotank River is the first river in the country to receive an Underground Railroad Network designation.

Topics. This historical marker is listed in these topic lists: Abolition & Underground RR • African Americans. A significant historical year for this entry is 1791. 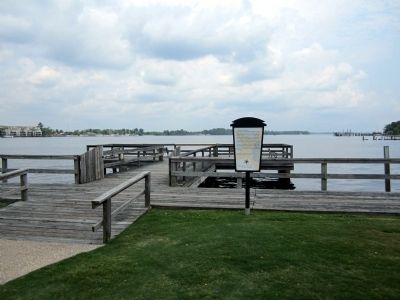 Click or scan to see
this page online
of South Water Street and East Ehringhaus Street, on the left when traveling south. Touch for map. Marker is at or near this postal address: 501 S Water St, Elizabeth City NC 27909, United States of America. Touch for directions.