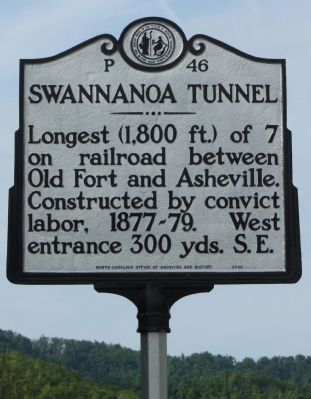 Photographed By Mike Stroud, May 19, 2012
1. Swannanoa Tunnel Marker
Inscription.
Swannanoa Tunnel. . Longest (1,800 ft.) of 7 on railroad between Old Fort and Asheville. Constructed by convict labor, 1877-79. West entrance 300 yds. S.E. . This historical marker was erected in 2008 by North Carolina Office of Archives and History. It is in Ridgecrest in Buncombe County North Carolina

Topics and series. This historical marker is listed in this topic list: Railroads & Streetcars. In addition, it is included in the North Carolina Division of Archives and History series list.

Other nearby markers. At least 8 other markers are within 3 miles of this marker, measured as the crow flies. Swannanoa Gap Engagement (within shouting distance of this marker); Swannanoa Gap (about 700 feet away, measured in a direct line); Stoneman's Raid (approx. 0.4 miles away); Mount Mitchell Railroad 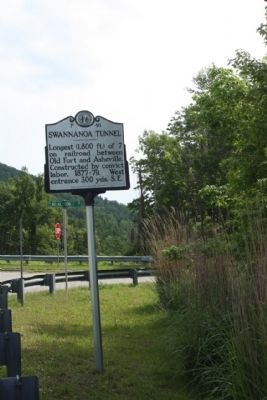 Regarding Swannanoa Tunnel. Western North Carolina Railroad’s Swannanoa Tunnel opened on March 11, 1879. At a length of 1,800 feet, it was the longest of the seven tunnels on the railroad between Old Fort and Asheville. The milestone in the development of western North Carolina opened the region and released it from its state of isolation. Before the construction of the railroad, the Buncombe Turnpike was Western North Carolina’s primary connection to the outside world. When the drought of 1845 resulted in total crop failure for mountain farms, pack trains and loaded wagons were unable to provide the frontier families with enough food to carry them through to the next crop. As a consequence, political leaders in the mountains demanded that the state provide a railroad link to Asheville. Ten years later the General Assembly finally passed legislation for the construction of a western 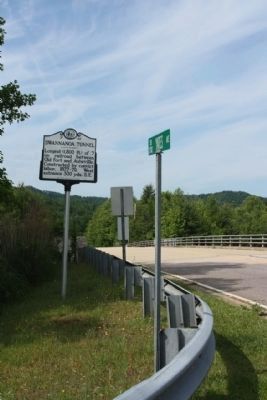 By the beginning of the Civil War, all but seventy miles of the route into Asheville was complete. During
Reconstruction, the state secured four million dollars in state bonds for the completion of the railroad. However, George W. Swepson, in his capacity as president of the western division of the Western North Carolina Railroad (WNCRR), and Milton S. Littlefield embezzled the bonds, further delaying the railroad’s completion. Construction of the railroad did not resume until 1877 when the WNCRR was organized with the state holding three-fourths of their stock. The General Assembly authorized the use of 500 convicts to provide the labor for the project.

James W. Wilson, who became president, superintendent, and chief engineer of the WNCRR, oversaw its completion. The hazardous construction involved drilling holes in the mountains of solid rock, blasting the rock, and removing the rubble. Wilson hired an engineer who introduced nitroglycerine as an explosive to replace black powder. The explosive paste that the engineer created using nitroglycerine, sawdust, and corn meal dislodged larger rocks. One hundred and twenty-five men lost their lives during the construction of the Swannanoa Tunnel. The tunnel was holed through on March 11, 1879. By October of 1880, the tracks were clear and the first train from Salisbury entered 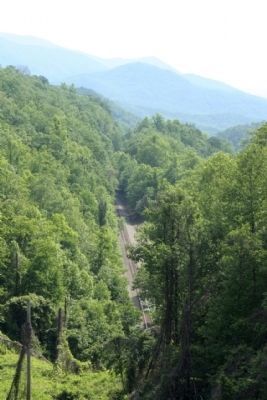 Photographed By Mike Stroud, May 19, 2012
4. Track view from atop Swannanoa Tunnel , seen today
Asheville. Asheville was not the end of the line for the WNCRR, but rather it pushed farther down the French Broad River to Paint Rock and ended in Murphy in 1891. ( North Carolina Dept. of Cultural Resources) 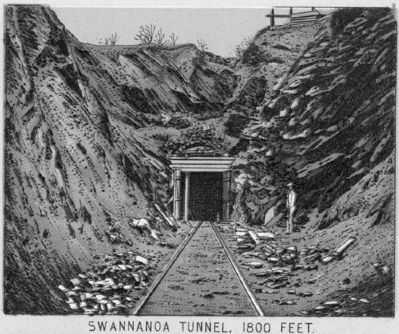