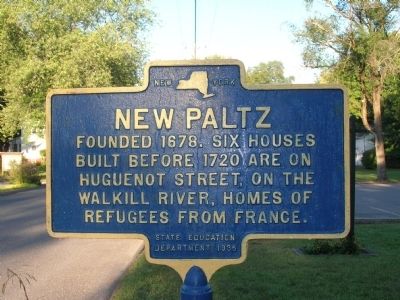 By Howard C. Ohlhous, September 17, 2007
1. New Paltz
Inscription.
New Paltz. .
Founded 1678. Six houses built before 1720 are on Huguenot Street, on the Walkill River, homes of refugees from France.. . This historical marker was erected in 1935 by New York State Education Department. It is in New Paltz in Ulster County New York

Founded 1678. Six houses
built before 1720 are on
Huguenot Street, on the
Walkill River, homes of
refugees from France.

Topics and series. This historical marker is listed in these topic lists: Colonial Era • Notable Buildings. In addition, it is included in the National Historic Landmarks series list. A significant historical year for this entry is 1678.

Location. Marker is missing. It was located near 41° 45.028′ N, 74° 5.259′ W. Marker was in New Paltz, New York, in Ulster County. Marker was on North Front Street, on the right when traveling west. Touch for map. Marker was in this post office area: New Paltz NY 12561, United States of America. Touch for directions.

More about this marker. This marker is within the Huguenot Street National Historic Landmark Historic District. There is a marker of the same name, but slightly different text, on Main Street.

Editor’s want-list for this marker. Wide area picture of the marker and its surroundings. • Can you help?
Share This Page.