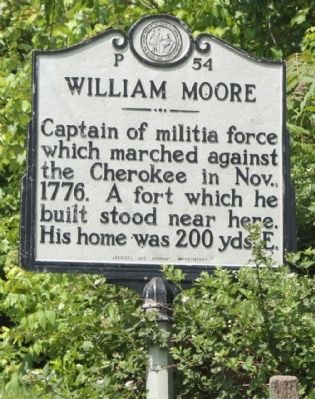 By Mike Stroud, May 19, 2012
1. William Moore Marker
Inscription.
William Moore. .
Captain of militia force which marched against the Cherokee in Nov., 1776. A fort which he built stood near here. His home was 200 yds. E.. . This historical marker was erected in 1960 by Archives and Highway Departments. It is in Enka Village in Buncombe County North Carolina

Captain of militia force
which marched against
the Cherokee in Nov.,
1776. A fort which he
built stood near here.
His home was 200 yds. E. 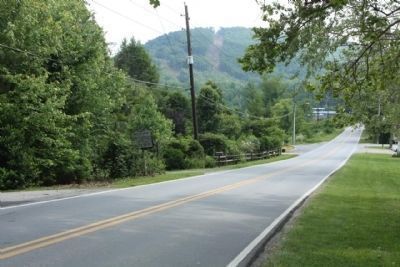 More about this marker. House is not visible from the roadway

Regarding William Moore. William Moore was born in Ireland and became one of the first white settlers west of the Blue Ridge in what is known as Buncombe County. Moore’s first visit to the area came in the fall of 1776 when he served as a militia captain under the command of General Griffith Rutherford. Rutherford’s expedition into western sections of North Carolina was designed to stop conflicts between the native Cherokee and encroaching white settlers. Additionally, they wanted to put a stop to the practices of British recruiters who enlisted the help of the Cherokee in harassing colonists during the early stages of the Revolutionary War.

Moore wrote a detailed account of an expedition of mounted troops that he led through the region. In his account, Moore described destruction of Indian towns and villages plus the brutal murder and mutilation of natives who were fleeing his men. Moore was at odds with his men over the care of Indian prisoners. Upon threat of mutiny, Moore was reluctantly obliged to sell some of their prisoners into slavery and divide the bounty among his men. 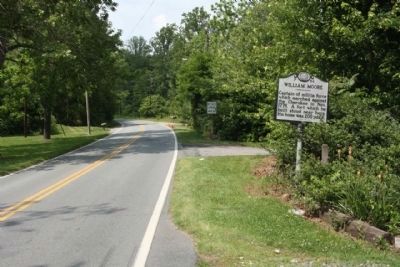 By Mike Stroud, May 19, 2012
3. William Moore Marker, looking north along Sand Hill Road
and settled on land along Hominy Creek. Moore and second wife, Margaret Patton, raised his six children from his first marriage to Ann Cathey as well as their six children. Moore served during the Revolution and then returned to Buncombe to serve in municipal and civic roles the remainder of his life. It is said that Moore first constructed a block fort on his property near Hominy Creek for protection from Native Americans.(North Carolina Dept. of Cultural Resources)