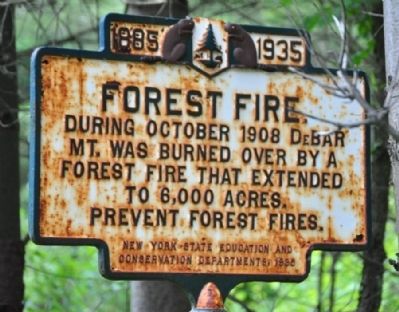 Photographed By Yugoboy, June 27, 2012
1. Forest Fire Marker
Inscription.
Forest Fire. During October 1908 DeBar Mt. was burned over by a forest fire that extended to 6,000 acres. Prevent forest fires. . This historical marker was erected in 1935 by New York State Education and Conservation Departments. It is in Paul Smiths in Franklin County New York

During October 1908 DeBar Mt. was burned over by a forest fire that extended to 6,000 acres. Prevent forest fires.

Topics. This historical marker is listed in these topic lists: Disasters • Horticulture & Forestry. A significant historical year for this entry is 1908.

Location. 44° 30.681′ N, 74° 18.285′ W. Marker is in Paul Smiths, New York, in Franklin County. Marker is on New York State Route 30, 0.6 miles north of McCollums Rd., on the left when traveling south. This marker is a little more off the road than most. It's visible from the road, but it's tucked into the trees. I only noticed it driving southbound on Rte. 30; it's nearly invisible going north. Touch for map. Marker is at or near this postal address: 9150 Route 30, Paul Smiths NY 12970, United States of America. Touch for directions.

Other nearby markers. At least 8 other markers are within 16 miles of this marker, measured as the crow flies. A different marker also named Forest Fire (approx. 4½ miles away); The Site of Camp S-60 (approx. 5½ miles away); Pettis' Grave (approx. 5.7 miles away); Jennings Road (approx. 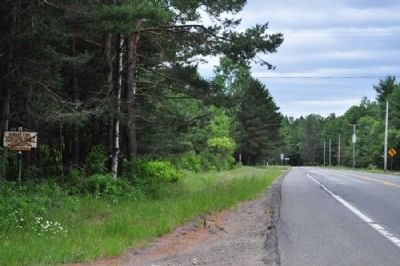 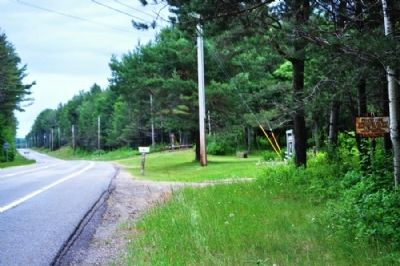