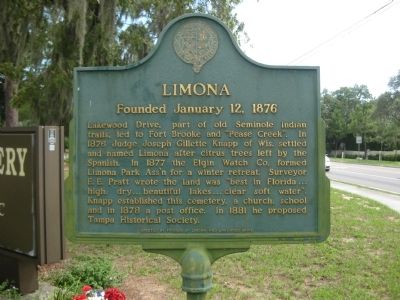 Erected 1989 by Friends of Limona and Lakewood Drive.

Topics. This historical marker is listed in these topic lists: Native Americans • Settlements & Settlers. A significant historical year for this entry is 1876.

Location. 27° 57.134′ N, 82° 18.614′ W. Marker is in Brandon, Florida, in Hillsborough County. Marker is at the intersection of Lakewood Drive and Limona Road, on the right when traveling north on Lakewood Drive. Marker is on the grounds of Limona Cemetery. Touch for map. Marker is in this post office area: Brandon FL 33510, United States of America. Touch for directions.

Other nearby markers. At least 8 other markers are within 4 miles of this marker, measured as the crow flies. Brandon School (approx. 1.4 miles away); 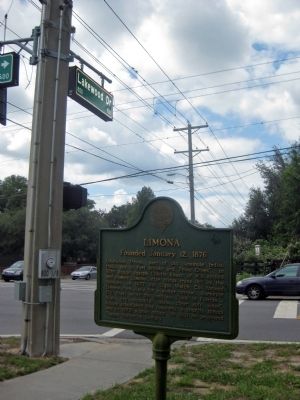 More about this marker. The marker is capped with the old Seal of Hillsborough County, Florida.

The marker itself does not state the year it was erected, however, according to the Limona Village Chapel United Methodist Church website, the historical marker was erected December 28, 1989. The church operates the Limona Cemetery, where the marker stands.

Regarding Limona. The unincorporated town of Limona began as one of the first "snowbird" communities in Hillsborough County, with E. E. Pratt of the Illinois-based Elgin Watch Company selecting it as the site to establish a company retirement village. Pratt's decision was heavily influenced by Judge Knapp, who had written articles promoting the area in several newspapers outside Florida. Limona would remain a small, rural community with population ranging from about 400 in 1883, to 200 in 1911, then 500 in 1925.

With the hardships of the Great Depression, most of Limona's residents left town. The community's identity would never really recover. Its post office closed in 1964, 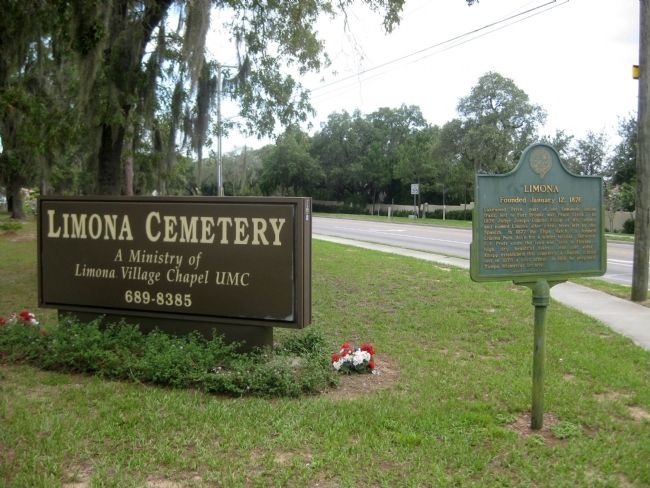 Photographed By AGS Media, June 27, 2012
3. Limona Marker
by which time neighboring community Brandon was rapidly growing and encroaching on what was left of Limona.

In the 21st century, Limona is not a town, but a neighborhood of unincorporated Brandon. A few local establishments are named for the old town, including the cemetery and Limona Elementary School.