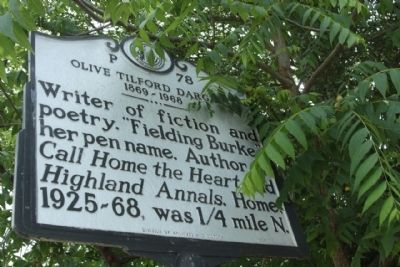 Photographed By Mike Stroud, May 19, 2012
1. Olive Tilford Dargan Marker
Inscription.
Olive Tilford Dargan. Writer of fiction and poetry. "Fielding Burke," her pen name. Author of Call Home the Heart and Highland Annals. Home, 1925-68, was 1/4 mile N. . This historical marker was erected in 1994 by Division of Archives and History. It is in Asheville in Buncombe County North Carolina

Erected 1994 by Division of Archives and History. (Marker Number P-78.)

Topics and series. This historical marker is listed in these topic lists: Arts, Letters, Music • Women. In addition, it is included in the North Carolina Division of Archives and History series list. 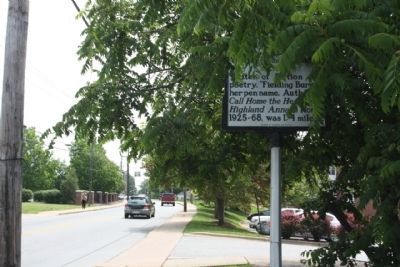 Regarding Olive Tilford Dargan. A native of Kentucky, Olive Tilford Dargan (1869-1968), who lived just short of a century, was a writer of poetry and fiction, most active in the 1920s and 1930s. Her “outstanding contribution to literature,” one critic observed, “is her sympathetic delineation of the North Carolina mountaineers.”
On graduation from Peabody College in Nashville, Miss Tilford for several years taught school. In 1898 she married Pegram Dargan of Blue Ridge, Georgia,where she was teaching. They moved to New York City where both worked as writers. In 1915 Pegram Dargan was lost at sea. Mrs. Dargan then moved to a farm in Swain County near the Almond community. Up to that time she had written primarily plays, but in 1917 she published The Cycle’s Rim, a series of sonnets dedicated to his memory. That book was the last volume of poetry to receive the Patterson Cup (in 1953 the Roanoke-Chowan Award was created specifically for poetry). More books followed, poems, plays, short 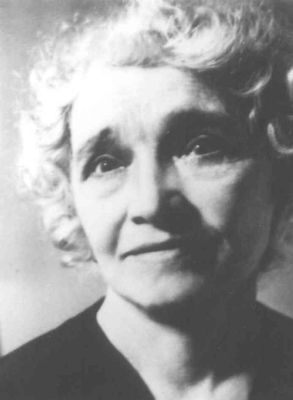 North Carolina Office of Archives & History
3. Olive Tilford Dargan
stories, in all thirteen volumes. In 1924, following the success of Highland Annals, a collection of stories set in the North Carolina mountains, the University of North Carolina awarded her an honorary doctorate of letters. That book was republished in 1941 under the title From My Highest Hill with photographs by Bayard Wootten.
In 1932 Mrs. Dargan published Call Home the Heart, the first of three novels, under the pseudonym Fielding Burke.That book and its sequel A Stone Came Rolling (1935) used as characters mountain natives lured to textile mills by the promise of prosperity. These “social problems” novels were widely reviewed and commented upon. Richard Walser of North Carolina State University, the dean of the state’s literary scholars, in his standard and widely consulted Literary North Carolina (revised, 1986), wrote that, while others have written about textile strikes, “it remained for the equally sympathetic Olive Tilford Dargan to translate those convulsive times into vital literature” in her novels.
The farm home in Swain County burned in 1923 and in 1925 Mrs. Dargan moved to west Asheville into a log cabin which she called “Bluebonnet Lodge.” She would live there the rest of her life. (The house was razed by a developer in the 1970s.)
(North Carolina Office of Archives & History — Department of Cultural Resources)
Credits. This page was last revised on June 22, 2021. It was originally submitted on July 7, 2012, by Mike Stroud of Bluffton, South Carolina. This page has been viewed 419 times since then and 20 times this year. Photos:   1, 2, 3. submitted on July 8, 2012, by Mike Stroud of Bluffton, South Carolina.
Share this page.