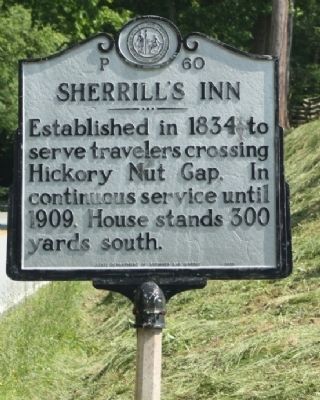 By Mike Stroud, May 19, 2012
1. Sherrill's Inn Marker
Inscription.
Sherrill's Inn. . Established in 1834 to serve travelers crossing Hickory Nut Gap. In continuous service until 1909. House stands 300 yards south. . This historical marker was erected in 1970 by State Department Of Archives and History. It is in Fairview in Buncombe County North Carolina

Topics and series. This historical marker is listed in this topic list: Notable Buildings. In addition, it is included in the North Carolina Division of Archives and History series list. A significant historical year for this entry is 1834. 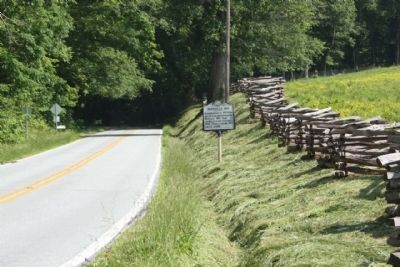 Regarding Sherrill's Inn. Early settlers in North Carolina’s mountains were hardy men and women and, as they carved a place for themselves in the countryside, they developed small cottage industries to supplement their income. A popular option for many pioneers was the establishment of taverns, or inns, for weary travelers to find some food and a dry place to lay their head. Among the early entrepreneurs was Bedford Sherrill who purchased land from John Sumner in 1834 in Hickory Nut Gap. Sherrill enlarged the existing house, possibly built as early as 1806, and added other outbuildings to support a store. Once traffic increased to the area, Sherrill was able to secure the local stagecoach stop, ensuring weary travelers would land at his doorstep. Visitors to Sherrill’s inn ranged from tourists to farmers driving herds of livestock southward. To accommodate the “drovers” and their herds, Sherrill sold feed and supplies to the farmers. During the Civil War, Sherrill’s inn served both Union and Confederate troops.
Sherrill sold the inn in 1866 to Thomas J. Lee who re-named the tavern “Cold Spring.” Lee experienced 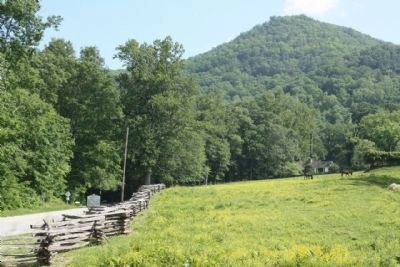 By Mike Stroud, May 18, 2012
3. Sherrill's Inn Marker, Hickory Nut Gap
financial distress as a result of the toll the Civil War took on the people and economy of North Carolina and Tennessee and the inn fell back into Sherrill’s hands in 1874. Sherrill’s visitation fell once the railroad reached Asheville in 1880. Sherrill grew apples which he sold to travelers and used to ferment into cider available to his visitors. Over its long history, the inn served the rich and famous as well as the average mountain people and its succession of visitors can be traced through its guest registers which have survived. The Sherrill family sold the inn again and it remained in operation until 1909. The inn, a sprawling house with shed porches overlooking an excellent scenic view, in time was acquired by Jamie McClure Clarke, who served in the U.S. House of Representatives, and remains privately owned. It has been restored and placed on the National Register of Historic Places.(North Carolina Dept. of Cultural Resources) 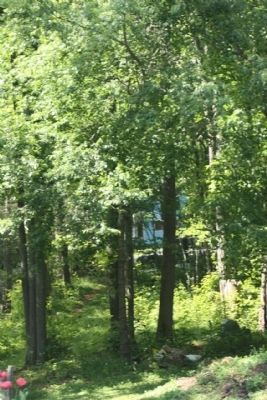 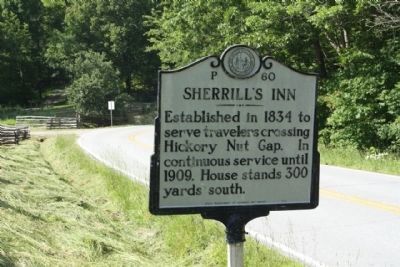