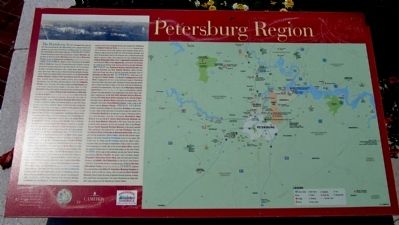 The Petersburg Area. Throughout this are you will find attractions for the entire family, from museum houses and gardens to a zoo, from fine dining to camping, from Civil War Trails and battlefields to white-water kayaking. 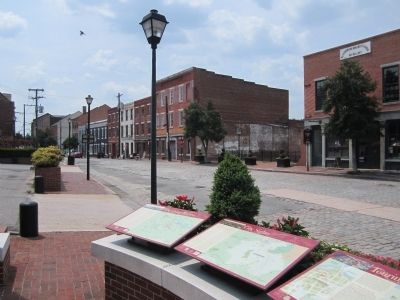 By Bernard Fisher, July 7, 2012
2. Petersburg Region Marker
in the area. Built in 1770, Eppington reflects the earliest American formal architectural style. By appointment only. Explore Falling Creek Ironworks and Mid-lothian Mines & Rail (just off the map to the northwest), sites of the first ironworks and coal mines in America. Re-live the Civil War at Drewry’s Bluff, a unit of Richmond National Battlefield Park. In 1862, a patched-together Confederate battery, armed with heavy artillery, decimated a powerful Federal flotilla there that included the Monitor. Then relax in the natural settings of Pocahontas State Park, the Dutch Gap Conservation Area (adjacent to Henricus), and Point of Rocks Park on the Appomattox. Pocahontas features camping, fishing, swimming, a CCC camp Museum, and outstanding summertime music in its amphitheater. Boat or fish on the James River, the Appomattox River, or nearby Lake Chesdin. Take in both dinner and theatre at Swift Creek Mill Theatre, housed in an ancient mill, or a performance at Virginia State University, a traditionally-black, 5,000-student college, famous for its music program. And don’t miss the Metro Richmond Zoo.

Colonial Heights. Enjoy the exquisite parlors at Violet Bank, where Robert E. Let kept his headquarters during the Siege of Petersburq. The cucumber tree in the yard is the world’s largest. Visit Fort Clifton, which guarded the river approach to Petersburg during the 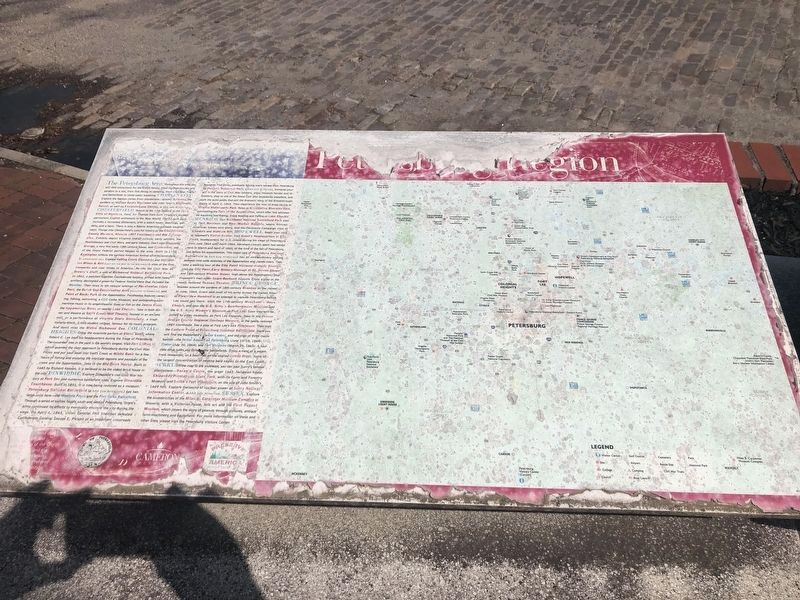 By Devry Becker Jones, May 8, 2020
3. Petersburg Region Marker
Unfortunately, the marker has experienced severe damage.
Civil War. Picnic and put your boat into Swift Creek at White Bank for a few hours of fishing and enjoying the intricate lagoons and passages of the creek and Appomattox. Take in the Old Brick House. Built in 1685 by Richard Kennon, it is believed to be the oldest brick house in the city.

Dinwiddie. Explore Dinwiddie’s rich Civil War history at Fork Inn and numerous battlefield sites. Explore Dinwiddie Courthouse. Built in 1851, it is now being restored as a museum. Petersburg National Battlefield (a AAA gem attraction), has two large units here—the Western Front and the Five Forks Battlefield. Through a series of battles fought south and west of Petersburg, Grant’s army continued its efforts to eventually encircle the city during the siege. On April 1, 1865, Union General Phil Sheridan defeated Confederate General George E. Pickett at an important crossroads known as Five Forks, eventually forcing Lee’s retreat from Petersburg. At Pamplin Historical Park, a AAA gem attraction, immerse yourself in the story of Civil War soldiers, enjoy museum houses and re-enactors, shop at one of the finest Civil War bookstores anywhere, and walk the quiet paths that tell the dramatic story of the Breakthrough Battle of April 2, 1865. Then experience the roar of drag-racing at Virginia Motorsports Park. Relax in Appomattox Riverside Park, overlooking the Falls of the Appomattox, which offer fine whitewater kayaking and fishing. Enjoy boating and fishing at Lake Chesdin.

Hopewell. Begin your visit at Hopewell’s Visitor Center. Visit Grant’s Headquarters at City Point, headquarters for U.S. Grant during his siege of Petersburg from June 1864 until April 1865. Abraham Lincoln spent two weeks here in March and April of 1865, at the time of the fall of Petersburg, just before his assassination. This major unit of Petersburg National Battlefield (a AAA gem attraction) has an extraordinary setting between mile-wide stretches of the Appomattox and James rivers. Then take a walking tour of the City Point National Historic District. Visit the City Point Early History Museum at St. Dennis Chapel and 18th-century Weston Manor, high above the Appomattox. Tour Hopewell’s mail-order Sears-Roebuck houses. Enjoy a play at the newly restored Beacon Theater.

Prince George. Wander around the gardens of 18th-century Brandon on me James. In June, 1864, Grant sent most of his army across the James River at Flowerdew Hundred in an attempt to capture Petersburg before Lee could get there. Visit the 17th-century Merchant’s Hope Church, and tour the U.S. Army’s Quartermaster Museum and the U.S. Army Women’s Museum at Fort Lee. Soon they will be joined by other museums, as Fort Lee expands. Take in the Prince George County Regional Heritage Museum, in the newly restored 1883 courthouse. See a play at Fort Lee’s Lee Playhouse. Then visit the Eastern Front of Petersburg National Battlefield. Here you will find the Battlefield’s Visitor Center, and the sites of three major battles—the Initial Assault on Petersburq (June 15-18, 1864), the Crater (July 30, 1864), and Fort Stedman (March 25, 1865). A four-mile drive takes you through the battlefields. Enjoy a meal at a water-front restaurant, or a boat ride on the storied James River, home of the largest concentration of nesting bald eagles on the East Coast.

Surry. Off the map to the southeast, you can tour Surry’s famous plantations—Bacon’s Castle, the great 1665 Jacobean house; Chippokes Plantations State Park, with Its Farm and Forestry Museum; and Smith’s Fort Plantation, on the site of John Smith’s 1609 fort. Explore the world of nuclear power at Surry Nuclear Information Center, a AAA gem attraction.

Sussex. Explore the eccentricities of the Miles B. Carpenter Museum Complex in Waverly, with a Victorian house, folk art and the First Peanut Museum, which coven the story of peanuts through pictures, antique farm machinery and equipment. For more information on these and other sites, please visit the Petersburg Visitors Center.

Erected by City of Petersburg and the Cameron Foundation.

Topics and series. This historical marker is listed in this topic list: Notable Places. In addition, it is included in the Former U.S. Presidents: #18 Ulysses S. Grant, and the Historically Black Colleges and Universities series lists.