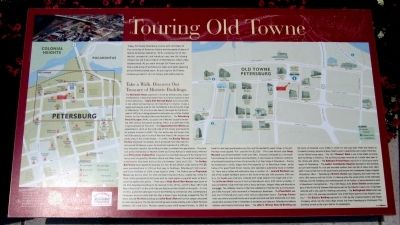 Today, Old Towne Petersburg is alive with reminders of four centuries of American history and thousands of years of Native American habitation. With a growing mix of residential, commercial, and industrial uses, new life is being infused into the historic fabric of Petersburg’s oldest urban neighborhood. As you walk through Old Towne you wilt find a wide array of architectural types and styles spanning almost three hundred years. As you explore Old Towne immerse yourself in its rich history and subtle charms.

Take a walk. Discover our treasure of historic buildings.

The McIlwaine House was built in 1815 by George Jones, mayor of Petersburg. It had to be moved from its original location to save it from demolition. South Side Railroad Depot, built circa 1854, is the oldest railroad station still standing in Virginia. It was a supply and staging area for the Confederate army during the Siege of Petersburg. The structure was heavily damaged during the tornado in 1993, but is being planned for restoration as a Visitor Contact Station for the Petersburg National Battlefield. The Petersburg Area Art League 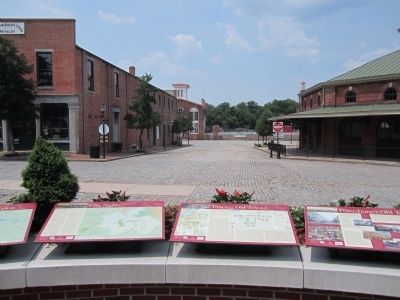 By Bernard Fisher, July 7, 2012
2. Touring Old Towne Marker
(PAAL) occupies one of Market Squares remaining 19th century mercantile buildings. PAAL is an affiliate of the Virginia Museum of Fine Arts. The Appomattox Iron Works was established in 1872 on the north side of Old Street, and moved to its present location in 1897. The iron works was active well into the 20th century, and it is one of the most intact 19th century iron works sites in the United States. In 1892, the Dunlop Tobacco Factory employed 700 people, and it produced more than two million pounds of tobacco a year. An excellent example of a 19th-century industrial complex, the building has been converted into apartments. The stone ruin at the intersection of Market Street and Grove Avenue is traditionally referred to as Peter Jones Trading Post. It was built on land that was part of the original Fort Henry tract occupied by Abraham Wood and Peter Jones. The original trading post is believed to have been built on this site between 1665 and 1720. The Golden Ball Tavern (site) opened for business in 1760. British officers under General Phillips were quartered here in 1781 on their way to Yorktown. Petersburg’s first Council and Court met there in 1784. It was razed in 1944. The Federal period Trapezium House was built in 1817 for Irish merchant Charles O’Hara. Legend has it that his West Indian servant built the house with no right angles or 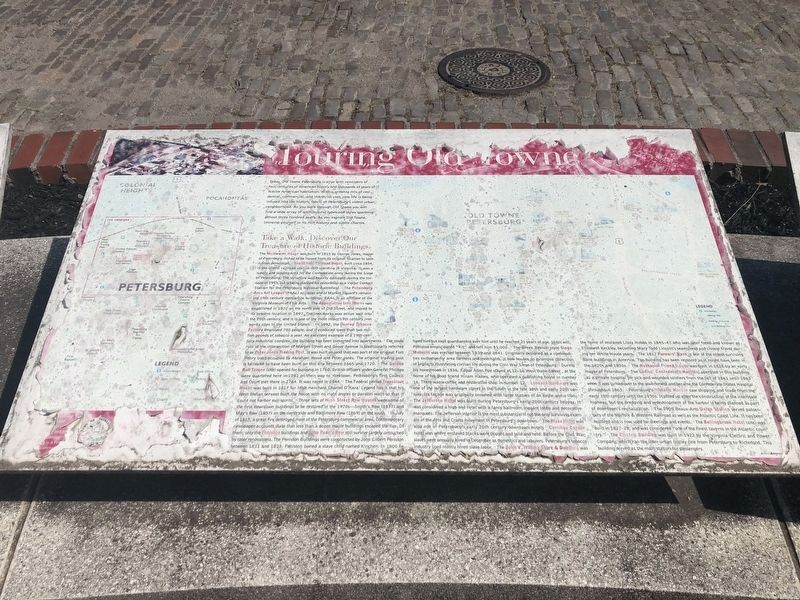 By Devry Becker Jones, May 8, 2020
3. Touring Old Towne Marker
Unfortunately, the marker has been seriously damaged.
parallel walls so that it could not harbor evil spirits. Three sets of High Street Row Houses were some of the first downtown buildings to be restored in the 1970s—Smith’s Row (1837) and May’s Row (1857) on the north side and Baltimore Row (1869) on the south. In July of 1815, a great fire destroyed most of the Petersburg commercial area. Contemporary newspaper accounts state that less than a dozen major buildings escaped the fire. Of them, only the Peniston Buildings and John Read’s Row still survive largely untouched by later renovations. The Peniston buildings were constructed John Gilbert Peniston between 1811 and 1813. Peniston owned a slave child named Kinchen. In 1800 he freed him but kept guardianship over him until he reached 21 years of age. In his will, Peniston emancipated “Kit” and left him $1,000. The Greek Revival-style Siege Museum was erected between 1839 and 1841. Originally designed as a commodities exchange for area farmers and merchants, it now houses an extensive collection of artifacts illustrating civilian life during the Civil War Siege of Petersburg. During his honeymoon in 1836, Edgar Allen Poe stayed at 12-16 West Bank Street, at the home of his good friend Hiram Haines, who operated a publishing house in number 16. There was a coffee and restorative shop in number 12. Leonard Hardware was one of the largest hardware stores in the South in the late 19th and early 20th century. Its façade was originally crowned with large statues of an eagle and a lion. The Jefferson Hotel was built during Petersburg’s early 20th century heyday. It was considered a high-end hotel with a fancy ballroom, elegant lobby and decorative marquees. The Jefferson interior is the most substantial if not the only surviving example of the Arts and Crafts movement in Petersburg’s downtown. The Plaza Hotel was also one of Petersburg’s early 20th century downtown hotels. Corlings Corner (site) was where enslaved blacks were bought and sold and held. Before the Civil War, slaves were annually hired in December as domestics and laborers. Petersburg’s tobacco industry used mostly hired slave labor. The John V. Willcox Store & Dwelling was the home of enslaved Lizzy Hobbs in 1845—47 who was later freed, and known as Elizabeth Keckley, becoming Mary Todd Lincoln’s seamstress and closest friend during her White House years. The 1817 Farmers’ Bank is one of the oldest surviving bank buildings in America. The building has been restored as it might have been in the 1820s and 1830s. The Nathaniel Friend House was built in 1816 by an early mayor of Petersburg. The Ladies’ Confederate Hospital operated in this building as a private hospital for sick and wounded soldiers from the fall of 1861 until 1863 when it was turned over to the government and became the Confederate States Hospital throughout 1863. Petersburg’s Historic Harbor saw shipping and trade from the early 18th century until the 1930s. It silted up after the construction of the interstate highway, but the dredging and redevelopment of the harbor is being planned as part of downtown’s revitalization. The 1909 Beaux-Arts Union Station served passengers of the Norfolk & Western Railroad as well as the Atlantic Coast Line. It has been restored and is now used for meetings and events. The Bollingbrook Hotel (site) was built in 1827-28, and was considered “one of the finest taverns in the Atlantic country.” The Electric Building was built in 1922 by the Virginia Electric and Power Company, which ran the inter-urban trolley line from Petersburg to Richmond. This building served as the main station for passengers.

Erected by City of Petersburg and the Cameron Foundation.