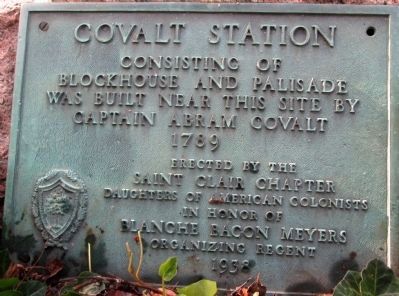 Photographed By Rev. Ronald Irick, October 13, 2014
1. Covalt Station Marker
close up of marker
Inscription.
Covalt Station, consisting of blockhouse and palisade, was built near this site by Captain Abram Covalt, 1789. . This historical marker was erected in 1938 by Saint Clair Chapter, Daughters of American Colonists, in honor of Blanche Bacon Meyers, Organizing Regent. It is in Terrace Park in Hamilton County Ohio

Covalt Station, consisting of blockhouse and palisade, was built near this site by Captain Abram Covalt, 1789.

Topics and series. This historical marker is listed in these topic lists: Forts and Castles • Settlements & Settlers. In addition, it is included in the Daughters of the American Colonists series list. A significant historical year for this entry is 1789.

Location. 39° 9.997′ N, 84° 18.156′ W. Marker is in Terrace Park, Ohio, in Hamilton County. Marker can be reached from the intersection of Miami Avenue and Terrace Place. The marker is located on the grounds of St. Thomas Episcopal Church near the front entrance. It was well-mounted at some point on a small boulder though it doesn't appear to have been the original mounting (at least from looking at the picture). Touch for map. Marker is at or near this postal address: 100 Miami Avenue, Terrace Park OH 45174, United States of America. Touch for directions.

Other nearby markers. At least 8 other markers are within 2 miles of this marker, measured as the crow flies. Milford Bridge (approx. half 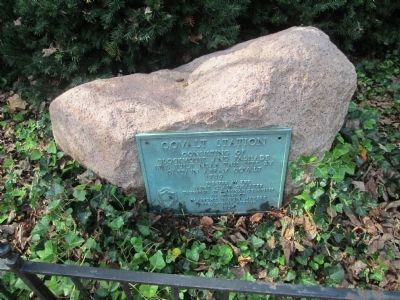 More about this marker. I haven't been able to see the marker in person but a person who works at the church was kind enough to take two photo and send them to me.

The site (no marker or anything I don't believe)of another nearby pioneer station is about 10 blocks south of the church at the end of Miami Ave. That would be Round Bottom Station. Another station with a marker would be the one for Garard's Station which was built soon after Covalt's. That station's site is about the end of Elston Rd, next to Lunken Airport.

Regarding Covalt Station. Abram or Abraham Covalt appears to have been born in Egg Harbor, N.J. in 1743. After his marriage they moved to Bedford County where he served a good portion of the Revolutionary War as a Captain in the local militia. During the latter part of the war the family moved to the Tenmile area in western Pennsylvania where it is likely he stayed until the end of 1789. About this time he bought the land in Ohio where he was to build his Station/Stockade. On the first day of the new year, his family (including 7 sons and 3 daughters) plus 7 other families (45 total) left on two flatboats for the journey to their new home. They landed at the mouth of the Little Miami about the 16th of January, near Columbia (close to Lunken Airport), the first settlement (November, 1788) and built temporary shelter while construction went on 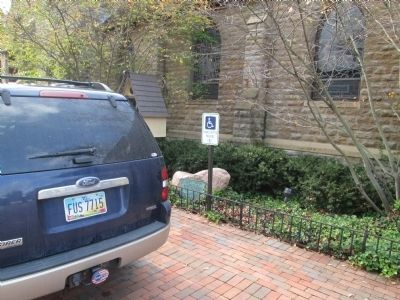 Photographed By Rev. Ronald Irick, October 13, 2014
3. Covalt Station Marker Site
marker is in a flower bed in front of the Church
at the Station. 17 dwellings were built as well as four blockhouses which were all surrounded by a protective palisade. From Richard Scamyhorn's "Stockades in the Wilderness" (p. 53), he states that "It was not only one of the largest fortifications...in Hamilton County but possibly the first one in the interior of the Miami Purchase." 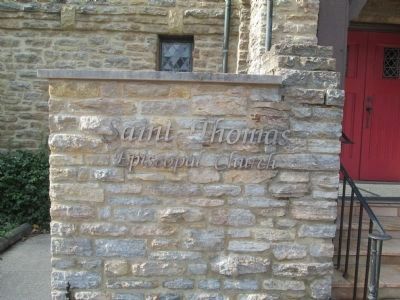 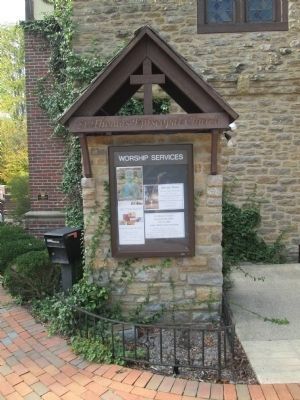 Photographed By Rev. Ronald Irick, October 13, 2014
5. Church Bulletin Board/ Marquee
in front of the Church 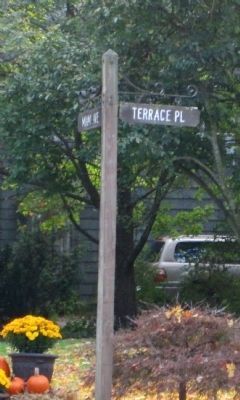