Patriots of the Revolution 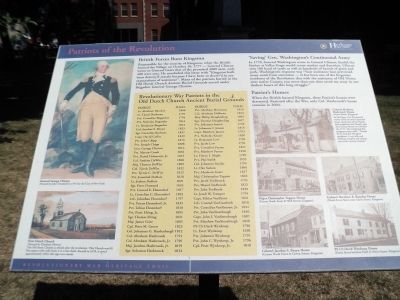 British Forces Burn Kingston
Responsible for the security of Kingston, when the British burned the Village on October 16, 1777 – General Clinton wrote to General Gates that of the promised 3000 men, only 400 were sent. He concluded this letter with “Kingston hath been destroy’d merely because I have been so deceiv’d in my expectations of assistance”. Many of the patriots buried in the Old Dutch Church Ancient Burial Grounds served under Brigadier General George Clinton.

‘Saving’ Gen. Washington’s Continental Army
In 1778, General Washington wrote to General Clinton, fearful the famine at Valley Forge would create mutiny and desertion. Clinton sent 100 head of cattle as well as hundreds of barrels of grain and pork. Washington’s response was “Your assistance hast prevented many souls from starvation . . . It has been one of the forgotten incidents of the Revolution that with the assistance of Old Ulster, your native County, you more than one time saved my army in our darkest hours of this long struggle.”

Patriot’s Homes
When the British burned Kingston, these Patriot’s 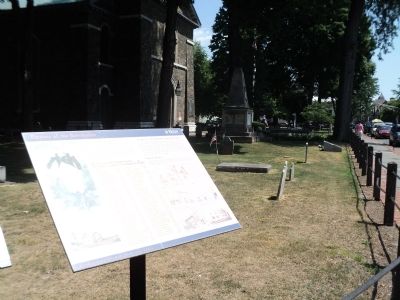 Photographed By Bill Coughlin, July 11, 2011
2. Patriots of the Revolution Marker

Click or scan to see
this page online
homes were destroyed. Restored after the War, only Col. Hasbrouck’s house remains in 2004.

Colonel Abraham Hasbrouck House (Green Street, Kingston)
In his Diary, Col. Hasbrouck wrote of his extensive personal losses, the losses of his friends and neighbors, his Church and the Country-House on October 16, 1777. He completed this poignant entry with, “Thanks be to God for His great goodness, I, my wife and children escaped and unhurt out of the enemy’s hands.” 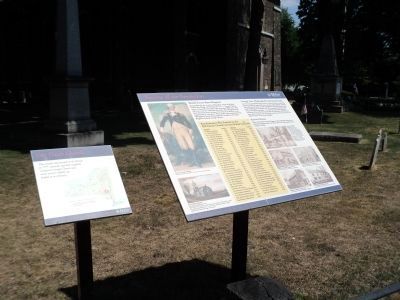 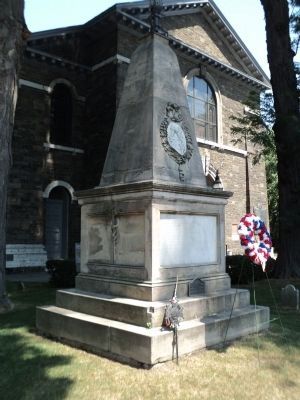 Topics and series. This historical marker is listed in these topic lists: Cemeteries & Burial Sites • War, US Revolutionary. In addition, it is included in the Former U.S. Presidents: #01 George Washington series list. A significant historical month for this entry is October 1988. 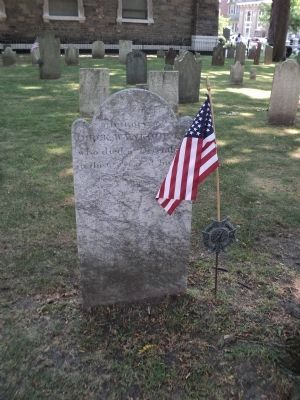 Photographed By Bill Coughlin, July 11, 2011
5. Grave of PS CD Dirck Wynkoop
1.147′ W. Marker is in Kingston, New York, in Ulster County. Marker is at the intersection of Main Street and Wall Street, on the right when traveling east on Main Street. Marker is located in front of the Old Dutch Church. Touch for map. Marker is in this post office area: Kingston NY 12401, United States of America. Touch for directions.

More about this marker. A full length painting of General George Clinton appears at the upper left of the marker. The painting was by John Trumbull in 1791 for the City of New York.
Below this is a painting of the First Dutch Church by Elizabeth Mowry, with the caption “The Old Stone Church as rebuilt after the revolution. This Church was 60 feet square with walls from 3 to 4 feet thick. Erected in 1678, it stood approximately where this sign now stands.”
The right side of the marker contains photographs of Patriot’s homes in Kingston. These include the Col. Abraham Hasbrouck House, Maj. Christopher Tappen House, Col. Abraham B. Bancker House, Col. Jacobus S. Bruyn House, and PS CS Dirck Wynkoop House. 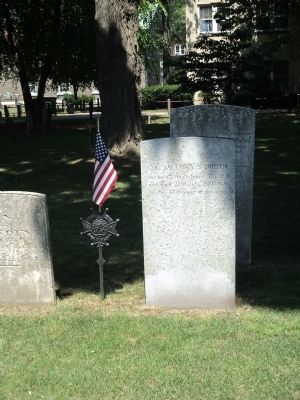 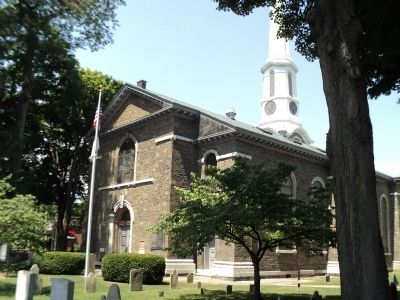