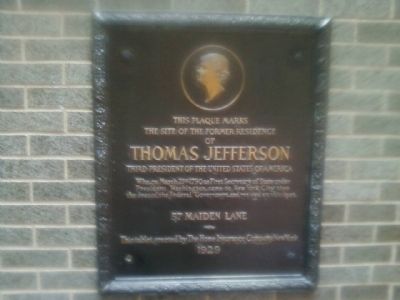 This plaque marks the site of the former residence of Thomas Jefferson third President of the United States of America who on March 21 1790 as first Secretary of State under President Washington came to New York City then seat of the Federal Government and resided on this spot. 57 Maiden Lane

Erected 1929 by The Home Insurance Company of New York.

Photographed By Larry Gertner, June 8, 2017
2. Marker location
The marker is in the plaza of 59 Maiden Lane, visible to the left above the two pedestrians. 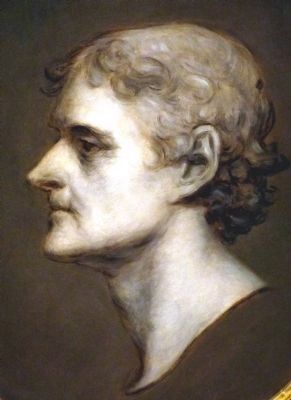 “This profile portrait was the work of Charles Bird King, who copied it from a likeness drawn by Gilbert Stuart during the fifth year of Jefferson's presidency. Of the two portraits Stuart painted of him, Jefferson seems to have much preferred the profile likeness. Most members of his immediate family shared that preference, and King made this copy from the Stuart original at the request of Jefferson's granddaughter, Virginia, and her husband, Nicholas Trist.”
Credits. This page was last revised on April 10, 2020. It was originally submitted on July 16, 2012, by Erik Lander of Brooklyn, New York. This page has been viewed 562 times since then and 22 times this year. Photos:   1. submitted on July 16, 2012, by Erik Lander of Brooklyn, New York.   2. submitted on June 8, 2017, by Larry Gertner of New York, New York.   3. submitted on May 26, 2015, by Allen C. Browne of Silver Spring, Maryland. • Bill Pfingsten was the editor who published this page.
Share this page.