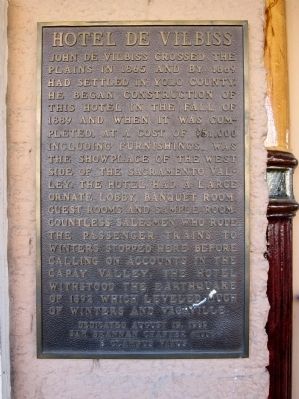 By Andrew Ruppenstein, February 26, 2011
1. Hotel De Vilbiss Marker
Inscription.
Hotel De Vilbiss. . John De Vilbiss crossed the plains in 1865 and by 1869 had settled in Yolo County. He began construction of this hotel in the fall of 1889 and when it was completed, at a cost of $51,000 including furnishings, was the showplace of the west side of Sacramento Valley. The hotel had a large ornate lobby, banquet room, guest rooms and sample room. Countless salesmen who rode the passenger trains to Winters stopped here before calling on accounts in the Capay Valley. The hotel withstood the Earthquake of 1892, which leveled much of Winters and Vacaville. .
Dedicated August 19, 1989 . Sam Brannan Chapter #1004 . E Clampus Vitus. . This historical marker was erected in 1989 by E Clampus Vitus, Sam Brannan Chapter No. 1004. It is in Winters in Yolo County California

John De Vilbiss crossed the plains in 1865 and by 1869 had settled in Yolo County. He began construction of this hotel in the fall of 1889 and when it was completed, at a cost of $51,000 including furnishings, was the showplace of the west side of Sacramento Valley. The hotel had a large ornate lobby, banquet room, guest rooms and sample room. Countless salesmen who rode the passenger trains to Winters stopped here before calling on accounts in the Capay Valley. The hotel withstood the Earthquake of 1892, which leveled much of Winters and Vacaville. 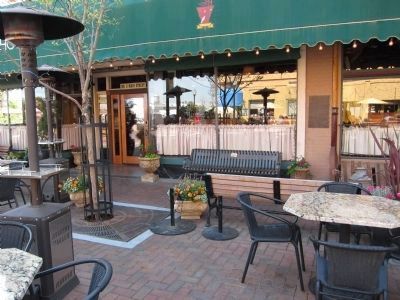 By Andrew Ruppenstein, April 9, 2011
2. Hotel De Vilbiss Marker - wide view
The marker is visible here between the two windows, and to the left is the entrance to the Buckhorn Steakhouse (on Main Street).
Avenue, on the left when traveling west on Main Street. Touch for map. Marker is at or near this postal address: 2-10 Main Street, Winters CA 95694, United States of America. Touch for directions.

Also see . . .
1. Who Brags About Their Age? We Do!. The Buckhorn Steakhouse provides a history of the Hotel De Vilbiss building: " The De Vilbiss Hotel was constructed on the comer of Main and Railroad Avenue in Winters in 1889 by John A. De Vilbiss, a prominent Winters rancher. ft was described as the first building of architectural proportions erected in Winters. The two-story brick building’s ground dimensions are 80 x 120 feet. Mr. Cook of Sacramento was the architect. The first floor contained all office, bar, dining room, large kitchen and two business rooms. There were two staircases leading to the second floor, which had 40 steeping rooms 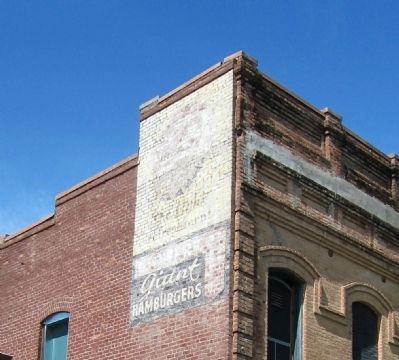 By Andrew Ruppenstein, April 9, 2011
3. Ghost signs on the southeast corner of the Hotel De Vilbiss building
"The Light Refreshment", a Pepsi sign (probably from the 1950's when that slogan was in use), and a "Giant Hamburgers" sign would have greeted travelers walking north up Railroad Avenue from the rail depot next door.
and a parlor. The original furnishings were elegant and excellent. The Hotel had its own gas machines to supply the chandeliers, and the Montague Patent French Range in the kitchen. The Hotel De Vilbiss withstood the devastating earthquake of 1892, which leveled much of Winters. However, the 72 foot cupola was destroyed by fire in 1915...." (Submitted on April 16, 2011.)

Additional comments.
1. Additional Information Regarding the Marker Dedication
Steve Hackett was noble Grand Humbug when this plaque was dedicated. Plaque wording by Loren A. Wilson.
— Submitted April 17, 2012, by Loren Wilson of Sebastopol, California.
2. Historical and Architectural Significance
The building which now houses the Buckhorn Restaurant was built in the late 1880's by John A. De Vilbiss. He was born in Lewis County, Missouri in 1841 where he remained until 1861 when he entered into 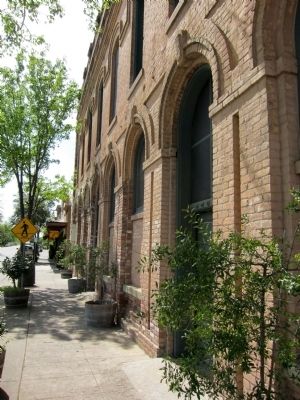 By Andrew Ruppenstein, April 9, 2011
4. Hotel De Vilbiss - ground level view looking south along Railroad Avenue
"An unusual feature of this large, Italianate building is combination of shallow and round arch openings, the former emphasized by a projecting brick molding. The tall, ground floor arches reflect the architect's efforts to create a "grand hotel" -- an image it held for years." - Winters Architectural Heritage: A Guide to the Historic Architecture of Winters, California
the service of the Confederacy. He served with all the valor of the young men of southern blood and birth, being with General Price in his campaigns. He left the ranks only after being picked up wounded and bleeding on the battlefield of Kirksville and made prisoner by federal troops. He was released after six months on the condition that he live north of the Mason-Dixon line and east of the Illinois Central Railroad. In 1865 John De Vilbiss and his wife crossed the plains as members of a train containing twenty-five wagons. They stayed in Virginia City, Nevada for four years prior to coming to Yolo County, settling here six years before the town of Winters was founded in 1875. Upon reaching Yolo County in 1868, John De Vilbiss began work as a farmhand and by 1878 had purchased 786 acres in and around the town of Winters. Foreseeing that Winters had a substantial future before it as a town, and would be the center of the fruit handling industry, and recognizing the need for first class accommodations for travelers De Vilbiss selected a suitable site and in October 1889, commenced the erection of the Hotel De Vilbiss. The hotel was opened to the public on July 15, 1890 with suitable ceremony. It was recorded in a History of Northern California as follows: "July 15, 1890, will long be remembered in Winters. It was the beginning of a new era in her history, and marks a 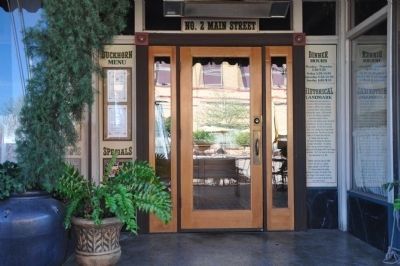 By Michael Kindig, April 6, 2014
5. Hotel De Vilbiss Entrance
decided change for the better in her prosperity. On that day the new Masonic Temple was dedicated to the uses and purposes of Masonry and the Hotel De Vilbiss was formally opened to the public. Early in the day people began coming into town from the country around, and from the towns surrounding us, and by 2 o'clock--the hour set for the commencement of the exercises--the streets were thronged with an eager, happy crowd, all anxious to do honor to the occasion. The business houses and the new hotel had been handsomely decorated, during the morning, with flags, streamers, evergreens, banners, pictures and gay colored cloth, presenting a holiday picture pleasing to gaze upon.” “The Woodland Brass band discoursed sweet music, at intervals, during the afternoon, and promptly at 2 o'clock the Knights of Pythias, who were to lead the procession, appeared upon the street in their handsome regalia. The procession was then formed by Grand Marshal H. Eversele, of Vacaville, in the following order. First the Band, then the Knights of Pythias, and G.A.R., marshaled by E.E. Kahn; then the Odd Fellows, marshaled by V. Morris; and the Masons, marshaled by R. Morrison. Dr. Meng, of Petaluma, and R.L. Humphrey acted as aids to the Grand Marshal, and rode at his side, at the head of the column, mounted upon richly caparisoned steeds. After marching through the principal streets 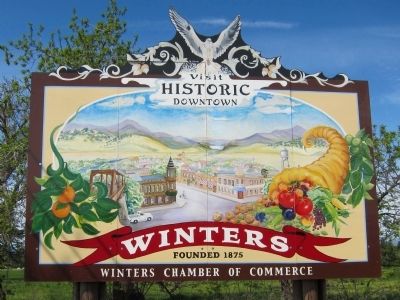 By Andrew Ruppenstein, April 9, 2011
6. Visit Historic Downtown - Winters, Founded 1875
This Chamber of Commerce sign, located on Route 128 when entering the city from the east, invites visitors to visit the Downtown Winters Historic District, which is on the National Register of Historic Places. This idealized view is looking northwest, with a pre-1915 (with cupola) Hotel De Vilbiss being most prominent in the left foreground.
of the town, the cavalcade was halted at the Masonic Temple, corner of Main and Second streets, where the ceremony of dedication was performed by Senior Grand Warden, C.R. Gritman of Napa.”

“At the conclusion of the dedicatory ceremonies, which were witnessed by a large gathering of ladies and gentlemen, in addition to the members of the Societies named, the hall was left to itself, and the crowd dispersed to the streets.”

“The evening's entertainment was under the direction of the Hotel Management, and was a success in every particular. As soon as twilight fell upon the town the Hotel building was lighted up with gas, from its own receiver, and presented a most brilliant sight particularly the cupola, which has a number of jets in it. At 9 o'clock a vocal and instrumental concert was given in the larger store room of the hotel, which was filled with the youth, beauty and fashion of Winters, Woodland, Dixon, Vacaville, Suisun, Monticello and the adjacent country. A most pleasing program had been prepared, under the supervision of Miss Mary De Vilbiss, the eldest daughter of the host, and was most excellently rendered, as follows: 1.Overture...Woodland Orchestra; 2. Recitation... "Medley", Miss Mary Cannedy; 3. Cornet Solo...Master Eddie Leaks of Dixon; 4. Vocal Solo...Miss Bessie Morris; 5. Selection...By the Orchestra; 6. Trio. 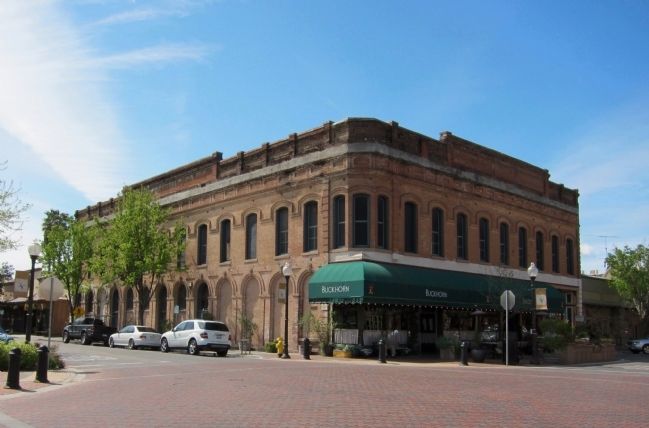 By Andrew Ruppenstein, April 9, 2011
7. Hotel De Vilbiss - view looking southwest
.."Moonlight Dance," song, Miss Morris, Miss McAvoy, and Miss Mary De Vilbiss.” “The program was short, but was highly appreciated by the large audience, and the numbers were loudly applauded. The room was then cleared for dancing, and the music sounded for the grand march at 10 o'clock. The march was headed by J.S. De Vilbiss and Miss McAvoy, who led their followers through a maze of figures. At the conclusion of the march, dancing was begun, and was kept up until the dawn of another day, with the exception of an intermission for supper, which was served in the capacious dining room. It is estimated that between four and five hundred persons took supper, which was pronounced excellent by all. Thus ended the first celebrations ever held in Winters, and a day which will long be pleasantly remembered by every one who participated in its festivities.” “The Hotel De Vilbiss is a handsome and imposing brick structure of two stories in height, while the ground dimensions are 80 x 120 feet. The architect, Mr. Cook, of Sacramento, having drawn the plans after the suggestions of Mr. De Vilbiss, has arranged within these dimensions a hotel second in convenience to none in the entire section of the State known as Northern California. The first story comprises a commodious and handsome office, an elegantly appointed bar, a dining-room 56 1/2 x 27 feet in extreme dimensions, a spacious kitchen 22 x 32 feet in area, fitted with a Montague Patent French range, while a hallway runs the entire distance from office to kitchen. The outlets to the floor above are a handsomely ornamented staircase leading from the office, while the entrance to the ladies' stairway is at the rear of the dining-room. The first story also contains two elegant business rooms, the superior of which are not to be found in Yolo County. A prominent feature is the great plate-glass windows in the front, which are 87 and 3/4 x 96 inches in dimensions, manufactured in Indiana with the utmost care and from the finest materials.”

“The second floor contains, besides necessary store rooms and closets, forty airy and elegantly furnished sleeping-rooms, a noteworthy feature being the splendid light afforded each room, bringing out in a clear manner the excellence of the plans. On this floor is also the roomy and handsomely appointed parlor, a fitting adjunct to such a home”. “The furnishings of the house, as regards the wood-work, are in California redwood and ash and the design excellent. The house is supplied with its own gas machine, and the dining room is lighted by two chandeliers of four lights, while the bar has one of four lights and the office two of two lights each. The halls above are illuminated by globe lights. The entire structure crowned by a tower which rises to the height of seventy-two feet at the corner of Main Street and Railroad Avenue." This structure was designed by the notable Sacramento architect A1len Aaron Cook and has been a local landmark for most of its existence. Though altered (the original cupola was destroyed by fire in 1915), the building retains a strong 19th century image, and remains one of the few relatively intact structures on Main Street that reflects the city's commercial past. The Hotel De Vilbiss withstood the devastating earthquake of 1892, which leveled much of Winters and Vacaville.