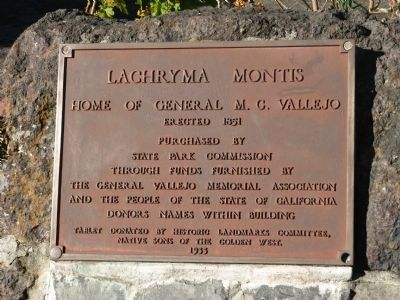 Photographed By Syd Whittle, January 10, 2009
1. Lachryma Montis Marker
Inscription.
Lachryma Montis. Home of General M.G. Vallejo.
Erected 1851.
Purchased by.
State Park Commission.
Through Funds Furnished by.
The General Vallejo Memorial Association.
And the People of the State of California.
Donors Names Within Building.
Plaque donated by Historic Landmarks Committee,.
Native Sons of the Golden West.
1933
. . This historical marker was erected in 1933 by Native Sons of the Golden West. It is in Sonoma in Sonoma County California

Topics and series. This historical marker is listed in these topic lists: Agriculture • Industry & Commerce • Settlements & Settlers. In addition, it is included in the California Historical Landmarks, and the Native Sons/Daughters of the Golden West series lists. A significant historical year for this entry is 1851. 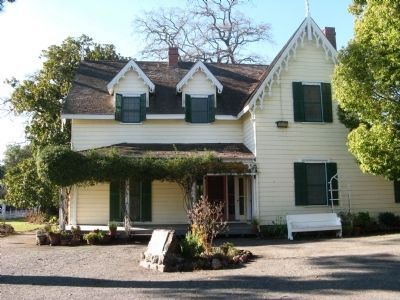 Click or scan to see
this page online
Third Street West. Touch for map. Marker is in this post office area: Sonoma CA 95476, United States of America. Touch for directions.

Regarding Lachryma Montis. This site was designated as California Registered Historical Landmark No.4, June 1, 1932 under the title General M.G. Vallejo Home.
Statement of Significance:
The home of General Mariano Guadalupe Vallejo, known as 'Lachryma Montis' (Tears of the Mountain), was built in 1850. Its name was derived from the springs that now are the source of Sonoma's water supply. General Vallejo, born at Monterey July 7, 1808, was commander of the northern Mexican frontier, founder of the Pueblo of Sonoma, and a member of the first Constitutional Convention of California.

Also see: Petaluma Adobe marker and all other nearby Sonoma markers for additional information. 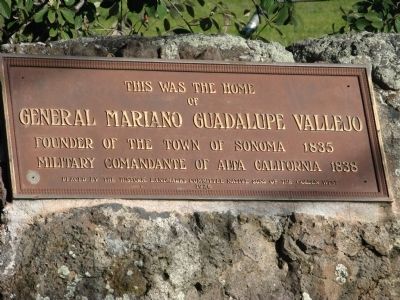 Additional commentary.
1. Mariano Guadalupe Vallejo Home
General M.G. Vallejo built the house for his growing family in 1851. Called Lachryma Montis (Tears of the Mountain), the property was named for its spring which supplies the farm and town of Sonoma with water, using redwood pipes.
This New England pre-fab two-story house is a fine example of Gothic Revival; the interior is furnished with many of the original Vallejo furnishings. Also on the property is the Swiss Chalet style, prefab, 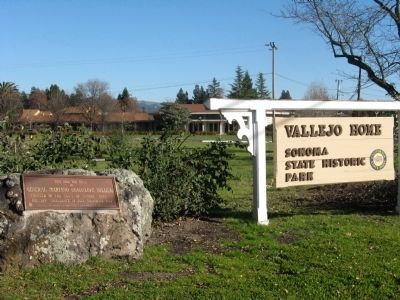 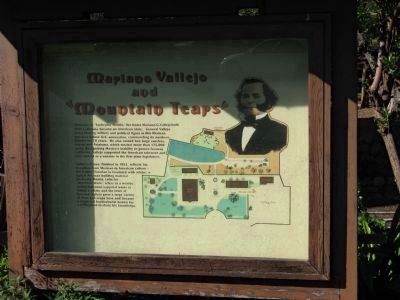 Photographed By Syd Whittle, January 10, 2009
5. Marker Located at Parking Area of Historical Park
Mariano Vallejo and “Mountain Tears”
Welcome to “Lachryma Montis,” the home Mariano G. Vallejo built after California became an American state. General Vallejo was a leading military and political figure in this Mexican province before U.S. annexation, commanding its northern frontier for 14 years. He also owned two large ranchos, Soscol and Petaluma, which totaled more than 175,000 acres. Recognizing Mexico’s inability to govern faraway California, Vallejo supported the American takeover and later served as a senator in the first state legislature.
Vallejo’s house, finished in 1852, reflects his transition from Mexican to American culture – the Gothic-Victorian is insulated with adobe, a typical Mexican building material. Lachryma Montis, Latin for “mountain tears,” refers to a nearby spring that once supplied water to Vallejo’s estate and the town of Sonoma. Vallejo grew a large variety of trees and crops here and became a respected horticulturist known for a willingness to share his knowledge.
Note: Marker displays a sketch of General Vallejo and a site map of the park.
of Mesa, Arizona. 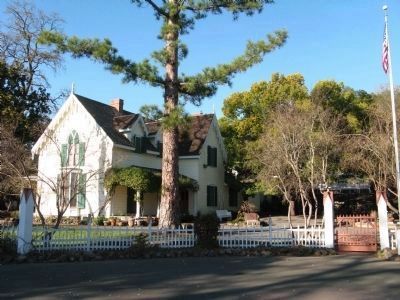 Photographed By Syd Whittle, January 10, 2009
6. Lachryma Montis
General Vallejo proudly referred to his new home as his "Yankee Home" and "Boston House." This new home was a great departure from the traditional adobe house the family once occupied close by. Built from a pre-fabricated wood frame manufactured in the northeast it represented an interest in Gothic architecture. 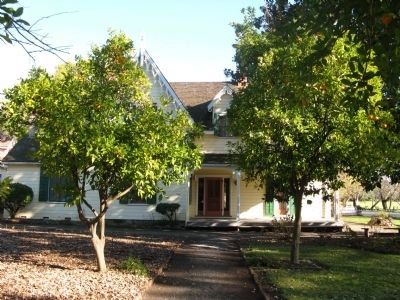 Photographed By Syd Whittle, January 10, 2009
7. Back View of Lachryma Montis 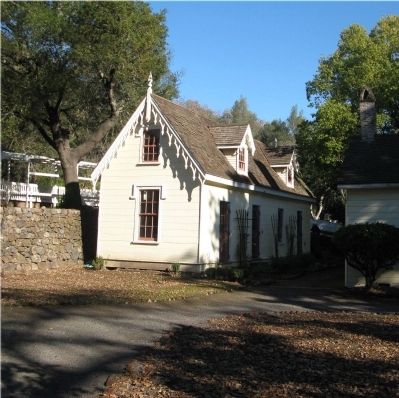 Photographed By Syd Whittle, January 10, 2009
8. The Cookhouse
A large central room is the servants dining area. Stairs lead to a storage loft and informal sleeping quarters. At one time family meals were cooked here and taken to the Dining Room through the back hallway door. The west room served as a laundry and small scullery. The east room was used as a dormitory by the Chinese cook who replaced earlier Indian cooks. 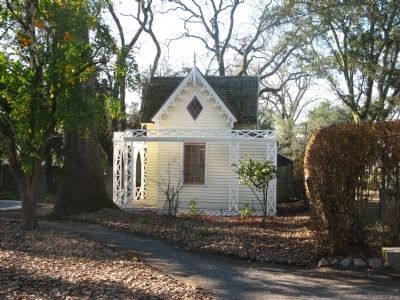 Photographed By Syd Whittle, January 10, 2009
9. "El Delirio"
The name suggests a place of bliss and ecstasy. It was here in Vallejo's later years he rewrote his History of California.
During the Spring and Summer it was sometimes used as a guest cottage. In earlier years the pavilion was located close to the reservoir and used as a changing room. 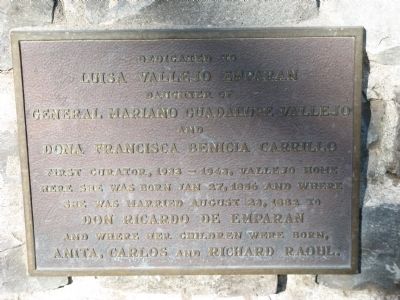 Photographed By Syd Whittle, January 10, 2009
10. Luisa Vallejo Emparan Marker Located at the Foot of the Steps Leading to The Hermitage
Dedicated to
LUISA VALLEJO EMPARAN
Daughter of
GENERAL MARIANO GUADALUPE VALLEJO
and
DONA FRANCISCA BENICIA CARRILLO
First Curator, 1933 – 1943, Vallejo Home
Here she was born Jan. 27, 1856 and where
she was married August 23, 1882 to
DON RICARDO DE EMPARAN
and where her children were born,
ANITA, CARLOS and RICHARD RAOUL. 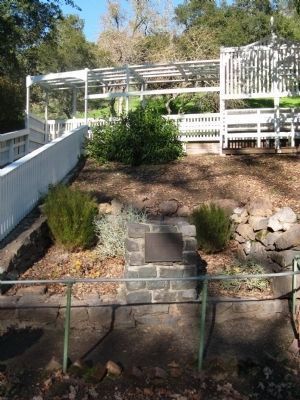 Photographed By Syd Whittle, January 10, 2009
11. Luisa Vallejo Emparan Marker (See Photo 10) and Steps Leading to the Reservoir and The Hermitage
The reservoir was constructed in the early 1850's to collect water from the springs in the hills above. The water was used for the estate crops, gardens and house. During the 1870's Vallejo developed the Sonoma Water Works to supplement his income and to supply water to local residents around the town square. 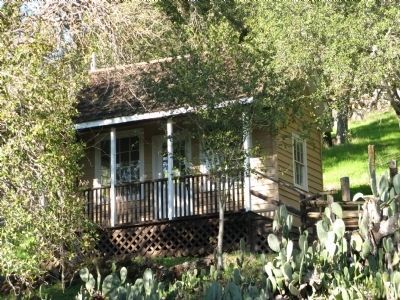 Photographed By Syd Whittle, January 10, 2009
12. The Hermitage
Often called Napoleon's Cabin after Vallejo's youngest son, this is a reconstruction. There is written family evidence that The Hermitage was actually built for Napoleon's older brother Platon, for his use during school vacations. 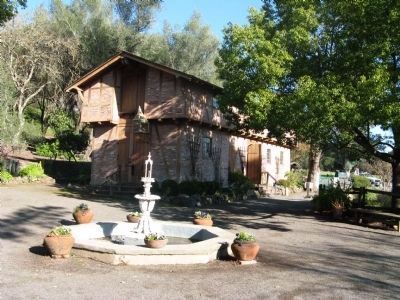 Photographed By Syd Whittle, January 10, 2009
13. The Swiss Chalet
This Tudor style building once served as a storage house and granary. The building componets are thought to have been imported from Europe and elsewhere due to the construction material shortage during the Gold Rush era.
Today this building serves as the Visitor Center and Museum. 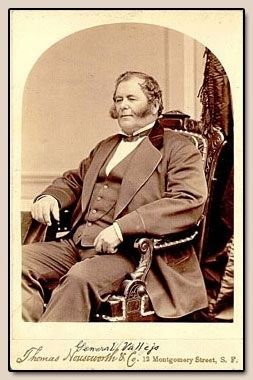 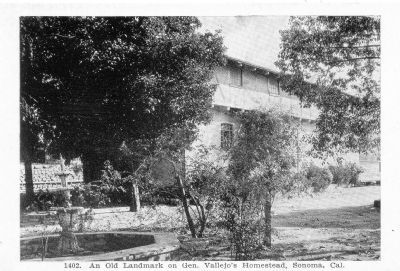 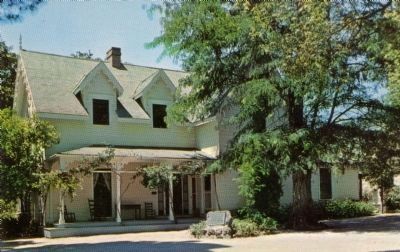