Dedicated for Public Use 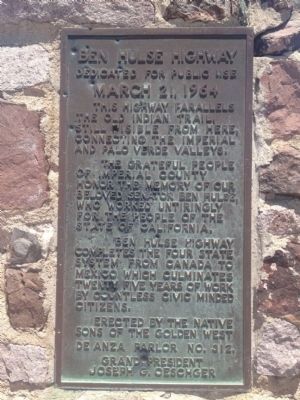 Photographed By Dean Whittle, June 17, 2012
1. Ben Hulse Highway Marker
Inscription.
Ben Hulse Highway. Dedicated for Public Use. This highway parallels the old Indian trail, still visible from here, connecting the Imperial and Palo Verde Valleys., The grateful people of Imperial County honor the memory of our beloved Senator Ben Hulse, who worked untiringly for the people of the State of California., Ben Hulse Highway completes the four state system from Canada to Mexico which culminates twenty five years of work by countless civic minded citizens. . This historical marker was erected by Native Sons of the Golden West, DeAnza Parlor No. 312, Grand President Jospeh G. Oeschger. It is in Winterhaven in Imperial County California

The grateful people of Imperial County honor the memory of our beloved Senator Ben Hulse, who worked untiringly for the people of the State of California.

Topics and series. This historical marker is listed in this topic list: Roads & Vehicles. In addition, it is included in the Native Sons/Daughters of the Golden West series list.

Location. 33° 9.61′ N, 114° 52.14′ W. Marker is in Winterhaven, California, in Imperial County. Marker is on Ben Hulse Highway (State Highway 78) 38 miles north of Interstate 8, on the left when traveling north. Touch for map. Marker is in this post office area: Winterhaven CA 92283, United States of America. Touch for directions.

Other nearby markers. At least 1 other marker is within 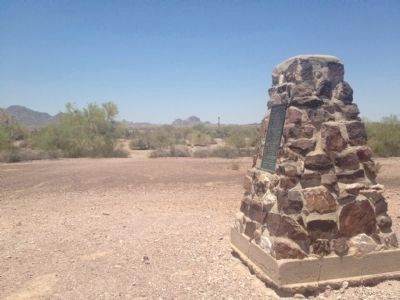 Click or scan to see
this page online
7 miles of this marker, measured as the crow flies. Pre-Columbian Indian Trail (approx. 6.8 miles away). 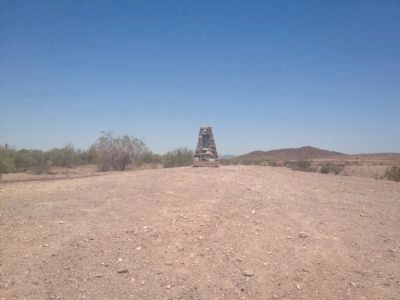