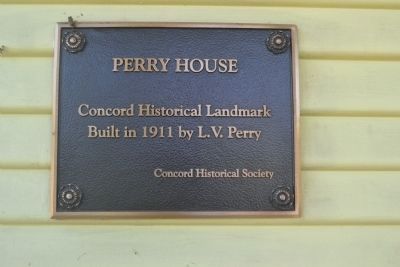 Location. 37° 58.61′ N, 122° 2.19′ W. Marker is in Concord, California, in Contra Costa County. Marker is on Concord Avenue north of Salvio Street, on the right when traveling south. Touch for map. Marker is at or near this postal address: 1990 Concord Avenue, Concord CA 94520, United States of America. Touch for directions.

Regarding Perry House. Originally located on Clayton Road just off Colfax, the wood-frame 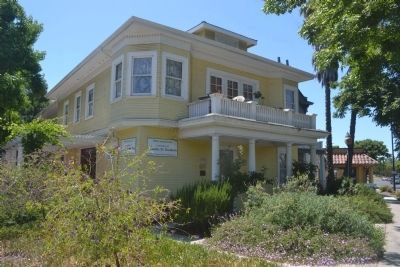 Concord Historical Society, circa July 2012
2. Perry House Marker
house was built in 1911 by its owner, Lawrence V. Perry, who constructed a number of other notable buildings in Concord. Built as two flats, the upstairs was occupied by Perry and his wife, Isabelle Nunez Perry and daughter Laurine. The lower flat was rented for many years and served as home for some of the high school teachers.

Moved to its present location in 1981, the building is Concord’s only surviving example of the Classic Revival style popular at the turn of the century. Characteristic features are the boxy form with hip-roof, the small dormer window in front, siding of narrow clapboards, classic cornice with dentile (small square blocks projecting as from under a cornice) moldings and round columned porch topped by a balustrade. Special features of the house are the upstairs bay windows at both front corners and the classic pergola at the side, an original part of the house. It was converted after its move to a restaurant and now is used as offices.
Credits. This page was last revised on June 16, 2016. It was originally submitted on July 23, 2012, by Concord Historical Society of Concord, California. This page has been viewed 479 times since then and 23 times this year. Photos:   1, 2. submitted on July 23, 2012, by Concord Historical Society of Concord, California. • Syd Whittle was the editor who published this page.
Share This Page.