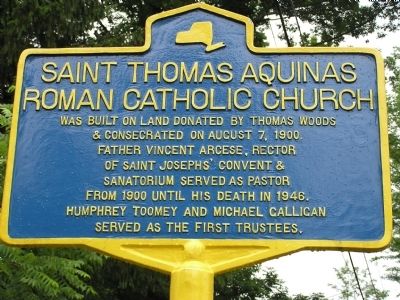 Was built on land donated by Thomas Woods & consecrated on August 7, 1900. Father Vincent Arcese, Rector of Saint Josephs' Convent & Sanatorium served as pastor from 1900 until his death in 1946. Humphrey Toomey and Michael Galligan served as the first trustees.

Other nearby markers. At least 8 other markers are within 4 miles of this marker, measured as the crow flies. Agnes DeMille (here, next to this marker); Site of Methodist Church (a few steps from this marker); Here Stood one of the Stage Coach Stations (about 700 feet away, measured in a direct line); Log Cabin (approx. 0.7 miles away); Town Hall Site (approx. 1.6 miles away); Ruddick Pond (approx. 2.3 miles away); Moore's Turning Mill and Saw Mill (approx. 3 miles away); Saint Josephs (approx. 3.4 miles away). Touch for a list and map of all markers in Forestburgh.
Credits. This page was last revised on June 16, 2016. It was originally submitted on July 24, 2012, by Tara Buckstad-Russo of Forestburgh, New York. This page has been viewed 360 times since then and 12 times this year. Photo   1. submitted on July 24, 2012, by Tara Buckstad-Russo of Forestburgh, New York. • Bill Pfingsten was the editor who published this page.