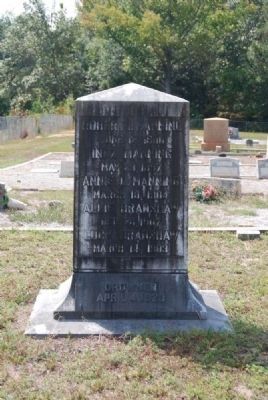 Location. 34° 12.583′ N, 82° 38.95′ W. Marker is in Lowndesville, South Carolina, in Abbeville County. Marker is on Marshall Avenue, on the right when traveling west. Marker is located in the cemetery adjacent to Providence Presbyterian Church. Touch for map. Marker is in this post office area: Lowndesville SC 29659, United States of America. Touch for directions.

Other nearby markers. At least 10 other markers are within 7 miles of this marker, measured as the crow flies. Lowndesville Veterans Monument (approx. 0.2 miles away); Lowndesville (approx. ¼ mile away); W.D. Nixon Bridge (approx. 1.1 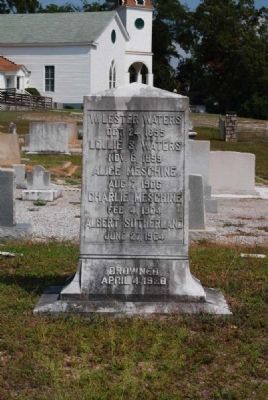 Regarding Harpers Ferry Drowning. Harper's Ferry crossed the Savannah River at Lowndesville. On April 4, 1920 (Easter Sunday), a cable on the Georgia side of the river broke and ten young people perished. The bodies of nine were recovered and are buried under a single headstone at Providence Presbyterian Church. The body of Charlie Meschine was never found. 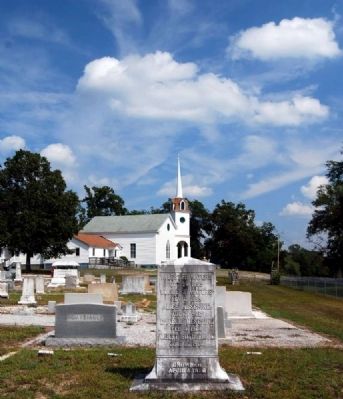 By Brian Scott, September 27, 2011
3. Harpers Ferry Drowning Marker
West Inscription
traveling in two automobiles and crossing Savannah River at Harpers' Ferry, six miles west of Lowndesville, 10 out of 11 persons in the party were drowned in the waters of the Savannah River.

The young people were on their way from South Carolina to Elbert County, Georgia, and had started across Savannah River on the flat. The post holding the cable by which the flat was operated gave way and the flat drifted down the river until it struck a rock and capsized. Those reported drowned are:

Albert Sutherland, about 18 years old; Miss Alice Meschine, about 15 years of age, and her brother, Charlie Maschine, about 19 years old. Lester Waters and his wife, young couple who had married only six weeks ago; Ineiz Manning, aged 9, and her sister, Miss Annie Manning, 16 years of age and their brother, Robert Manning, age 22; Miss Allie Bradshaw, aged 18, and her sister. Miss Lucy Bradshaw, aged' 15. The only person in the party who was saved was Thomas Bradshaw, a brother of Misses Allie Bradshaw; and Lucy Bradshaw.

It is thought that the high waters of the Savannah River and the strong current rushing against the flat loaded with the party and two automobiles in which they were traveling, caused the cable post to give way. All of the drowned are from prominent families residing in and around the town of Lowndesville, Abbeville County, and as soon as the matter 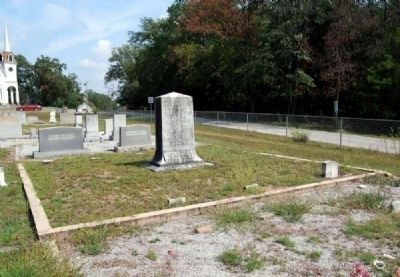 By Brian Scott, September 27, 2011
4. Harpers Ferry Drowning Marker
West Inscription
was reported the whole country turned into a searching party trying to recover the bodies of the drowned. On account of the swollen river none of the bodies had been recovered late this afternoon.

The tragedy has caused a gloom over the entire community.
— Submitted August 25, 2012, by Brian Scott of Anderson, South Carolina.
2. Story of the Drowning at Harper's Ferry - Ten Persons Drown April 4th 1920
Lester Waters was a young man born and reared in the vicinity of Lowndesville, S.C. Miss Lollie Scoggin was a young school teacher of the same section, very beautiful and accomplished. They became friends and in course of time, friendship ripened into love. But the tocsin of war sounded, the draft law was enacted, and Lester was among those that had to leave father, mother and sweetheart and answer the call. After many weary months abroad, he returned to greet with a happy smile those whom he loved best, and in a short while he and Miss Lollie were married. He went to work as ferry-man for Mr. Harper, and his young bride continued her duties as teacher of the Diamond Springs School, near the ferry. This was about February 1st, 1920, they went to house-keeping near the brink of the river so that Lester could be near his work of carrying people across the river.

The Fatal Day
On Easter Sunday, April 4th, 1920, a party of their friends came to visit them; nine young people in all, five young ladies and four young men. All happy and gay, heedless of lurking danger, they went down to the river and started across on the flat.

It was said by a man that lived near the ferry at the time of the accident, that Lester did not want to take the risk of going across, when the water was so high, but that some of the party insisted on going. It was said by some one that Mr. W.H. Bradshaw left the ferry a short while before the accident and told them: "Whatever you do, don't attempt to cross the river this evening." But anyway they went, and just as the flat reached the middle of the river, the post on the S.C. side gave way, the flat swung down stream for a short distance and then (being held by the cable) sank to the bottom. The young ladies screamed with terror as they were being swallowed up by the cold muddy water, but alas! their doom was sealed; no human agency could act in time to save them. It is said that Lester had started to swim out when Mrs. "Waters rose for the last time and screamed. He exclaimed: "Oh, my God, what will I do." And when last seen, he was diving in a frantic effort to save her.

Nightfall found the river bank lined with heartbroken parents and friends of the lost ones. One family was minus a son and two daughters. Out of another, two young daughters were gone, never to return, and still another family suffered the loss of a fourteen year old daughter, and a six teen year old son. Another family lost a son, and alas, for Lester Waters and his young wife; their joy was turned into sorrow in the twinkling of an eye, and nothing was left at his house but possibly some dear pet that mutely longed for its master's return.

First Body Found
Thus passed three days and nights, the river was lined with searching parties, but no sight of the dead, nothing but the rippling waters of the Savannah, the songs of whippoorwills, the croaking of frogs to break the awful silence. On Wednesday evening, a man was searching along the brink of the river on Bear Island, near the point where the Seaboard railroad cresses, just about ten miles from the scene of drowning, and found the body of Miss Lucy Bradshaw. She had floated near the shore and become entangled with the bushes. Her body was taken out and brought to Calhoun Falls and prepared for burial, and sent home. It was said by people that saw her that she looked almost natural.

Nearly a week passed before another body was found. Searchers at Cherokee Falls found the body of Miss Inez Manning, her head and shoulders being buried in mud and one shoe protruding above the water, showing where she was. It was said that she could still be identified although badly swollen.

Another Man Drowned at Gregg Shoals
About five days after the Harpers Ferry tragedy a man named Conwell was drowned at Gregg Shoals, some distance above, and people were searching for his body also. It happened that a few days after the body of Miss Inez Manning was found that two parties of searchers, one on each side of the river found the bodies of Mr. Conwell and Albert Sutherland about the same time. Mr. Conwell was found on the South Carolina side and was taken to Georgia for burial. Albert Sutherland was found on the Georgia side and brought to South Carolina for burial. A short time afterward the body of Miss Annie Manning was found at McCalla Island. About seventeen days had passed since the tragedy, another heavy rain fell, the river reached the flood stage again, and other bodies began to rise. The bodies of Miss Alice Meschine, Mrs. Lester Waters and Robert Manning were all picked up at Cade's Ferry, about fifteen miles from the scene of the tragedy, all in one day, and the body of Lester Waters was seen floating down Cherokee Falls the same day.

Ten days passed and it seemed as if no other bodies would be recovered but Saturday evening, May 1st, two men were fishing at Millwood, twelve miles below Harper's Ferry. The river at this point is very wide and dotted with small is lands. It was nearly sundown, and they saw a vulture hovering overhead; nearer and lower it came, and then alighted on a small green island in the middle of the stream. "I'll just bet you that is one of those drowned people", one said to the other. They got a bateau and went over and found
the mortal remains of Lester Waters, with his features horribly mangled. They came on across and found a party of men fishing on the S.C. side and told them what they had found. After a brief consultation they decided to wait until the next morning to remove the body. On Sunday morning a party of men and boys went down from Calhoun Falls to get the body and carried a coffin and box. Three boats, manned by two men each, went over. Dr. J.V. Tate went in one of the boats to disinfect the body so that it could be handled. They tied a rope to his ankles and floated him to land, dragged him out and there we beheld in that hideous form, what had only four weeks before been a hand some young man, full of life, health and strength. Who could help but feel sad over such a fate? He had just passed thru all the dangers of the great war, had just been face to face with death from shot and shell, sword and bayonet, only to come home and be drowned in his own beloved Savannah.

The body of Charley Meschine has never been found, and
to quote, the words of the poet:

"On the bosom of Savannah,
One of them is sleeping still."