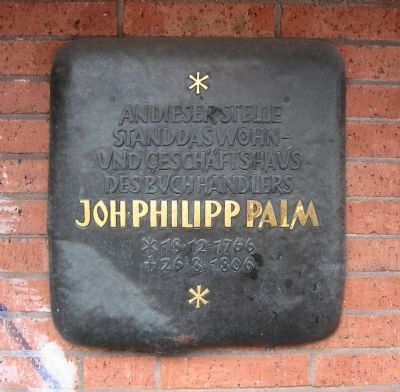 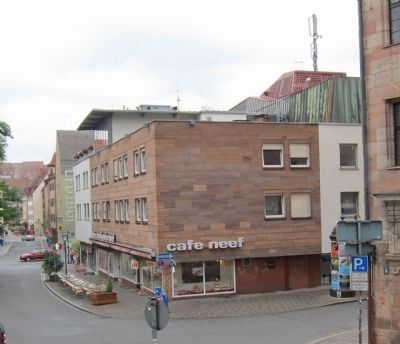 By Andrew Ruppenstein, July 17, 2012
2. Johann Phillip Palm Marker - wide view
The marker is just visible here, mounted on the Schustergasse side of Cafe Neef at about face-height, about 2 yards/meters to the right of the window.
or Johannes Philipp Palm (17 December 1768–26 August 1806) was a German bookseller executed during the Napoleonic Wars.... (Submitted on July 27, 2012.)

2. The Execution of Johann Philipp Palm. The Napoleon Series' article on Johann Palm, "...Johann Philipp Palm (b., 17 November 1768 at Schorndorf—d., 26 August 1806 at Braunau-am-Inn), an obscure bookseller from Nuremberg, was executed in the early afternoon of 26 August 1806. He was shot by a French firing squad in a field outside of the town of Braunau, an Austrian town garrisoned by the French. A single pistol shot to the head finished him off. Palm had been arrested 12 days earlier and charged with publishing and distributing libelous pamphlets about France and Napoleon. A military court had tried Palm on 25 August 1806 and found him guilty." (Submitted on July 27, 2012.)

3. Dangerous times for a bookseller. Archaeolibris' reflection on the "crime" of Johann Palm and the effect his execution had on history: "... A flood of cartoons and pamphlets deriding Napoleon and the French troops appeared in the wake of Palm’s death. A strong wave of patriotic fervor developed, enabling the Prussian King to leverage Palm’s execution for going to war against Napoleon. Though more significant reasons already existed, it was Palm’s execution that created a 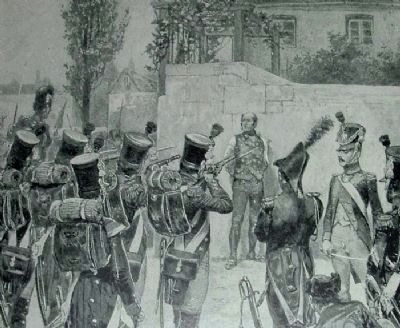 By R, Caton Woodville, circa 1903
3. The Execution of Johann Palm
moral outcry and fueled rising public opinion against Napoleon and French occupation." (Submitted on July 27, 2012.)