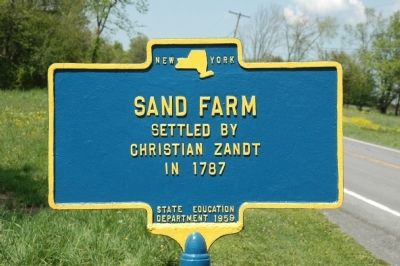 By Howard C. Ohlhous, May 13, 2012
1. Sand Farm Marker
Inscription.
Sand Farm. .
Sand Farm Settled by Christian Zandt in 1787 . . This historical marker was erected in 1959 by New York State Education Department. It is in Knox in Albany County New York

More about this marker. Christian Zandt of Trier, Germany had emigrated to Schoharie in 1766. The farm in Knox was granted to Zandt in 1787 by the Patroon Stephen Van Rensselaer. It was Zandt's son, Jacob, who changed the family name to Sand. Peter Sand built the brick house on the farm about 1800.

Dr. and Mrs. John Sand had the State Education Department install the original historic marker in 1936. In 1959, Lester H. Hearn (Grassland Dairy Farm, Knox, NY) reported to the State Historian that the marker was missing. Because the state had no funds for historic markers, Mr. Hearn paid for the replacement - about $35. In 1989 the farm was recognized by the National Bicentennial Farm program of the U.S. Department of Agriculture as having been in the same family since the birth of the U.S. Constitution. 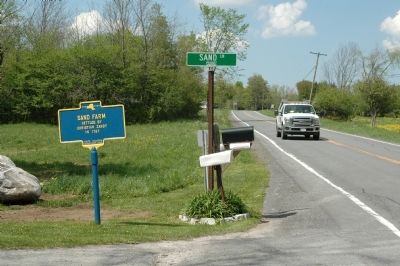 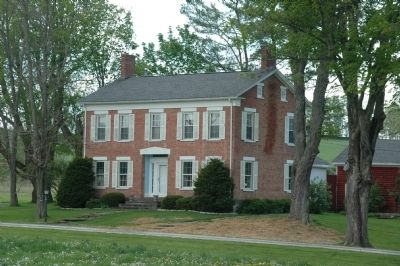