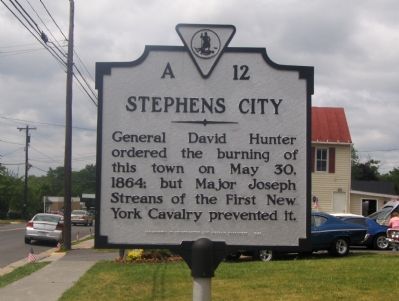 Photographed By Roger Dean Meyer, June 3, 2006
1. Stephens City Marker
Inscription.
Stephens City. . , General David Hunter ordered the burning of this town on May 30, 1864; but Major Joseph Streans of the First New York Cavalry prevented it. . This historical marker was erected in 1988 by Department of Conservation and Historic Preservation. It is in Stephens City in Frederick County Virginia

General David Hunter ordered the burning of this town on May 30, 1864; but Major Joseph Streans of the First New York Cavalry prevented it.

Erected 1988 by Department of Conservation and Historic Preservation. (Marker Number A-12.)

Topics and series. This historical marker is listed in this topic list: War, US Civil. In addition, it is included in the Virginia Department of Historic Resources series list. A significant historical date for this entry is May 30, 1864. 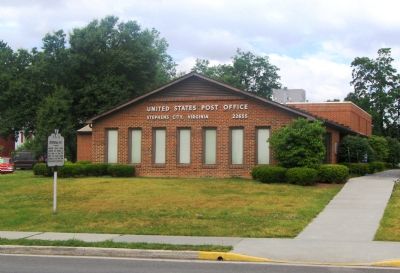 Click or scan to see
this page online
(approx. ¾ mile away); In Memory of All American Veterans (approx. 0.8 miles away); Newtown Stephensburg Historic District (approx. 0.9 miles away). Touch for a list and map of all markers in Stephens City.

Additional commentary.
1. More information about this incident at Newtown
The Union "perspective"...

From The First New York Lincoln Cavalry (1902), by William H. Beach, pp. 355-356. *Beach was originally of Co. B of this regiment and later lieutenant and adjutant of the regiment.

“On the 29th, the march began before 4 o’clock, headed toward Mt. Jackson. On the 30th, the regiment was ordered back to Mt. Jackson.

On May 31, two hundred of the regiment under Major [Joseph K.] Stearns [Stearns resigned as a major on February 6, 1865] started early on the road back. Marched steadily, halting for a short rest at Edinburg, Woodstock, and Strasburg. At one of these halts a man of Co. L. was shot. A supposed bushwhacker was arrested and charged with the act. It almost came to the point of hanging him. But on further examination there was found a reasonable doubt. The man was probably shot accidentally, and the arrested man who had protested his innocence, but faced his threatened fate bravely, was released.

Bivouacked on Stickel’s farm near Newtown. A wagon train had been captured and destroyed by Gilmor at Newtown. It began to be suspected that the purpose of this expedition was to burn the town. There were murmurings of disapproval. Burning houses of citizens was not the business of soldiers.

On the march early the next morning. The apprehensions of the object of this move were confirmed when silently, and more like a funeral procession than a marching army, the column moved into the one long street of the town and halted. The old people and children were standing in the doorways with an expression of mute helplessness on their faces. The hearts of the men beat with more trepidation than when going into battle. Those who spoke did so to express their purpose to obey no orders to burn.

But the officers had consulted together and decided to disobey the order of General Hunter.

Some conferences with the citizens were held. It was found that Union men wounded in the attack on the train had been carefully nursed in these homes. It seemed best to have the people take an oath of allegiance to the Union, and spare the town. The officers agreed to stand by Major Stearns if he should incur the wrath of General Hunter.

It was a relief to all when the column headed toward the south and the houses in the town still standing.

Gilmor in his “Four Years in the Saddle,” states that he sent word to Hunter, that he had a number of prisoners in his hands, and that for every house burned a prisoner would be hanged. He attributes the saving of Newtown to this threat of his. But Major Stearns and his officers knew nothing of this threat of Gilmor’s They had made up their minds before reaching Newtown, that they would not obey the orders to burn.”

“General Hunter had issued a circular to the citizens, telling them that if any more trains were attacked or pickets captured, he would burn every house within reach of his cavalry. This seems almost incredible for the nineteenth century, but it is nevertheless true, and the printed circular is still in possession of the citizens. He had already burned the parsonage, and Mr. White’s, and two other houses in Newtown. When I rode into town, the people, although overjoyed at my success, were alarmed at the consequences to themselves, and with pallid countenance said, ‘We shall be houseless before to-morrow night.’ This was more than I could bear; so seizing a pen, I wrote a communication to General Hunter, telling him that I held thirty-five men and six officers as prisoners; that I would take them to a secure place in the Blue Ridge, and upon receiving intelligence that he had carried out his threat, I would hand every one of them, and send their bodies to him in the Valley. And Hunter knew that I would do it.

The next day he sent three hundred cavalry, under the command of my friend, Captain Stearns, with orders to burn Newtown, and all the barns and houses in the neighborhood. He was accompanied by Captain [Jenyns C.] Battersby [originally of Company C; later a brevet colonel who survived the war] and Captain [Ezra H.] Bailey [originally of Company A; later a brevet lieutenant colonel, who survived the war], and, to their honor be it said, they actually shed tears when they announced to the citizens the inhuman order with which they were charged. But my note was handed to them, and the town was not burned.”
— Submitted January 6, 2009, by Robert H. Moore, II of Winchester, Virginia.
2. Orders issued in respect to this incident
Headquarters Department of West Virginia,
Cedar Creek, Va., May 24, 1864.

Major: The commanding general directs that you proceed at once with your command to Newtown, ascertain the house from which our train was fired upon last night, and burn the same with all the outbuildings pertaining thereto. Notify the inhabitants of the town and along the pike if our trains or escorts are fired upon in that way again, that the commanding general will cause to be burned every rebel house within five miles of the place at which the firing occurs.

Major: You will detail from your command 200 men, with the proper complement of commissioned officers, to proceed to Newtown to-morrow morning at 3 o'clock, for the purpose of burning every house, store, and out-building in that place, except the churches and the houses and out-buildings of those who are known to be loyal citizens of the United States. You will also burn the houses, &c., of all rebels between Newtown and Middletown. You will spare the house and premises of Dr. Owens, at Newtown, he having been very kind to our wounded soldiers; and where the burning of the house of a rebel would endanger the property of a loyal citizen, the house or out-buildings of the rebel shall not be burned. You will report back to these headquarters, making a written report of the expedition.

This by command of the major-general commanding:
I am, major, very obediently, yours,
[P. G. Bier,]
Assistant Adjutant-General.