To Commemorate the Site of the First Permanent Capitol of Georgia 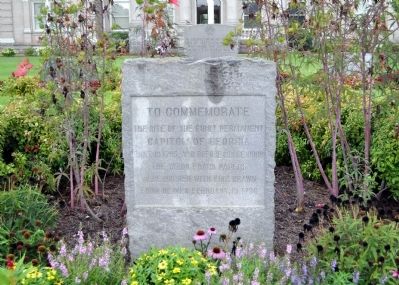 Built in 1795, and before whose door the Yazoo Fraud papers were burned with fire drawn from heaven, February 15, 1796.

Topics. This historical marker is listed in this topic list: Government & Politics. A significant historical date for this entry is February 15, 1796.

Location. 32° 59.9′ N, 82° 24.483′ W. Marker is in Louisville, Georgia, in Jefferson County. Marker is on Broad Street (Business U.S. 1) 0 miles east of Green Street, on the right when traveling east. The marker stands in front of the Jefferson County Courthouse, built in 1904 on the foundations of the 1848 courthouse which had been built from materials of the original state capitol. Touch for map. Marker is in this post office area: Louisville GA 30434, United States of America. Touch for directions. 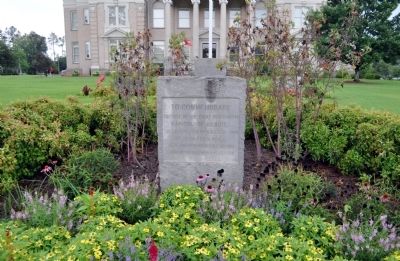 Photographed By David Seibert, August 2, 2012
2. To Commemorate the Site of the First Permanent Capitol of Georgia Marker

Click or scan to see
this page online
feet away); Louisville, Georgia (approx. 0.2 miles away); Rocky Comfort Creek (approx. 0.8 miles away). Touch for a list and map of all markers in Louisville.

Also see . . .  Yazoo Land Fraud. New Georgia Encyclopedia website entry:
The "fire drawn from heaven" is described in Georgia: The WPA Guide to Its Towns and Countryside, 1940: “Tradition has handed down a dramatic story of the burning of the Yazoo papers. While the crowd stood with uncovered heads, a white-haired stranger galloped up, dismounted, and proclaimed that he had come to see justice done. Saying that only fire from heaven should destroy such works of iniquity, he drew a sunglass from his pocket and held it over the pile of paper until smoke began to rise. Then he rode away, never to be seen again.” (Submitted on August 12, 2012, by David Seibert of Sandy Springs, Georgia.) 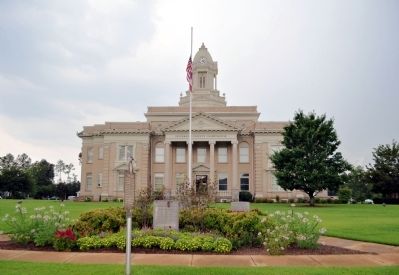