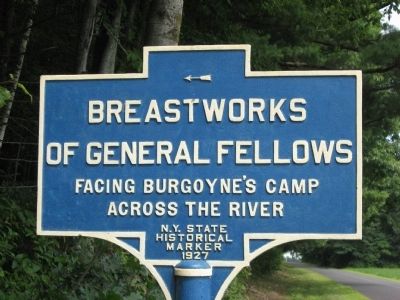 Facing Burgoyne's camp across the River

More about this marker. The Marker is by the side of the road. The Breastworks are on private property.

Regarding Breastworks of General Fellows. General Fellows had occupied Saratoga (Present day Schuylerville) to block Burgoyne's retreat after the battles of Saratoga near

Click or scan to see
this page online
Bemis Heights. When Burgoyne retreated to Schuylerville General Fellows moved to the east side of the river to keep the British from reaching Ft Edwards.