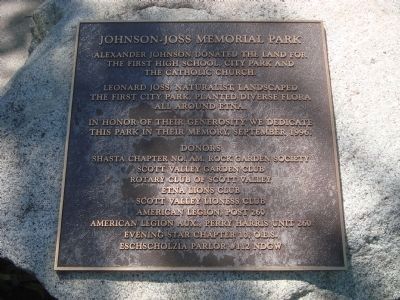 Alexander Johnson donated the land for the first High School, City Park and the Catholic Church.

In honor of their generosity we dedicated this park in their memory, September 1996.

Topics and series. This historical marker is listed in these topic lists: Churches & Religion • Education • Parks & Recreational Areas. In addition, it is included in the Native Sons/Daughters of the Golden West series list. A significant historical year for this entry is 1996. 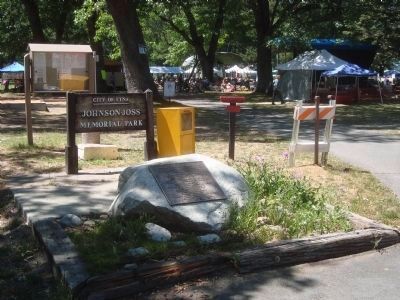 Click or scan to see
this page online
is located near the parking area at the entrance to Johnson-Joss City Park. Touch for map. Marker is at or near this postal address: 500 Howell Road, Etna CA 96027, United States of America. Touch for directions.

Other nearby markers. At least 8 other markers are within walking distance of this marker. Hudson Bay Trail (here, next to this marker); Hallie Daggett: Sophisticated Lady and Hardy Pioneer (a few steps from this marker); Senator Randolph Collier (approx. ¼ mile away); I.O.O.F. Hall (approx. ¼ mile away); City of Etna (approx. 0.3 miles away); This land of ‘Siskiyou’... (approx. 0.3 miles away); Etna Cemetery Veterans Memorial (approx. 0.4 miles away); Stephen H. Meek (approx. half a mile away). Touch for a list and map of all markers in Etna.
Credits. This page was last revised on January 5, 2020. It was originally submitted on August 19, 2012, by Barry Swackhamer of Brentwood, California. This page has been viewed 435 times since then and 18 times this year. Photos:   1, 2. submitted on July 29, 2012, by Barry Swackhamer of Brentwood, California. • Syd Whittle was the editor who published this page.
Share this page.