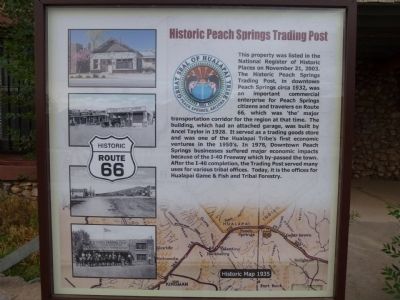 This property was listed in the National Register of Historic Places on November 21, 2003. The Historic Peach Springs Trading Post, in downtown Peach Springs circa 1932, was an important commercial enterprise for Peach Springs citizens and travelers on Route 66, which was 'the' major transportation corridor for the region at that time. The building, which had an attached garage, was built by Ancel Taylor in 1928. It served as a trading goods store and was one of the Hualapai Tribe's first economic ventures in the 1950's. In 1978, Downtown Peach Springs businesses suffered major economic impacts because of the I-40 Freeway which by-passed the town. After the I-40 completion, the Trading Post served many uses for various tribal offices. Today it is the offices for Hualapai Game & Fish and Tribal Forestry.

Topics and series. This historical marker is listed in these topic lists: Industry & Commerce • Native Americans. In addition, it is included in the U.S. Route 66 series list. 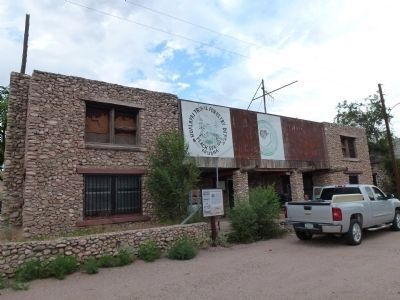