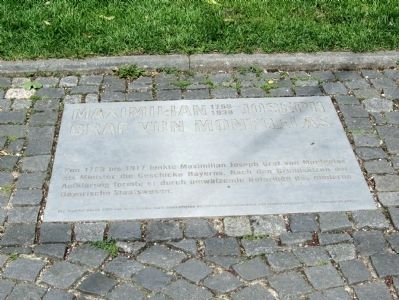 [Marker text translated into English, more or less:] As minister from 1799 to 1816, Maximilian Joseph, the Earl of Montgelas, guided the fate of Bavaria. Through revolutionary reforms he shaped the modern Bavarian state according to the principles of The Enlightenment.

The sculpture was created in 2005 by Karin Sender based on traditional images using computer-guided milled aluminum. 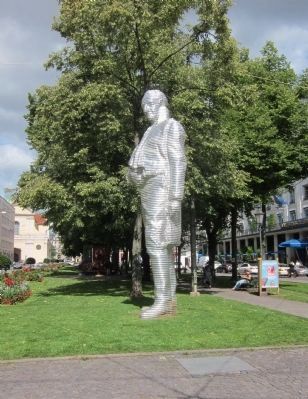 By Andrew Ruppenstein, July 12, 2012
2. Maximilian Joseph - Earl of Montgelas Marker - wide view looking west
The marker is visible here embedded in the sidewalk in front of the statue. The statue itself stands over 6 meters high and weighs approximately 9.5 tons. The statue was installed on April 25, 2005.
. Marker is at or near this postal address: Promenadeplatz 2, Munich, Bavaria 80333, Germany. Touch for directions.

Also see . . .  Maximilian von Montgelas - Wikipedia English-language entry (retrieved 8/22/2012). On Maximilian Joseph's reforms: ...Montgelas enforced the taxation of the nobility and the clergy. Taxation went along with a complete economic description and measurement of Bavaria leading to an outstanding cadastral system. Montgelas passed the first modern constitution for Bavaria in 1808, which included the abolition of any relics of serfdom that had survived until then. Montgelas was responsible for the abolition of the torture in 1812 by introducing a new penal code based on contemporary humanitarian standards. 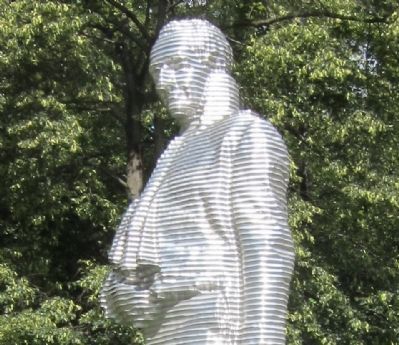 By Andrew Ruppenstein, July 12, 2012
3. Maximilian Joseph von Montgelas statue - closer view
He introduced compulsory school education, compulsory military service, compulsory vaccination. He reorganised the Bavarian administration by a centralised cabinet of modern ministries instead of a multitude of chambers. Montgelas was also responsible for the abolition of all tolls within the kingdom of Bavaria thus enabling free trade within the country. And he designed and passed a regulation for civil servants, the "Dienstpragmatik", which became a model for civil service in Germany as whole.... In order to reduce the political and cultural influence of the Catholic Church in Bavaria in favor of the secular state, Montgelas extended civil rights, including citizenship, to Protestants. The Jewish communities were awarded a secure legal status, although there remained a discriminating special registration. (Submitted on August 23, 2012.) 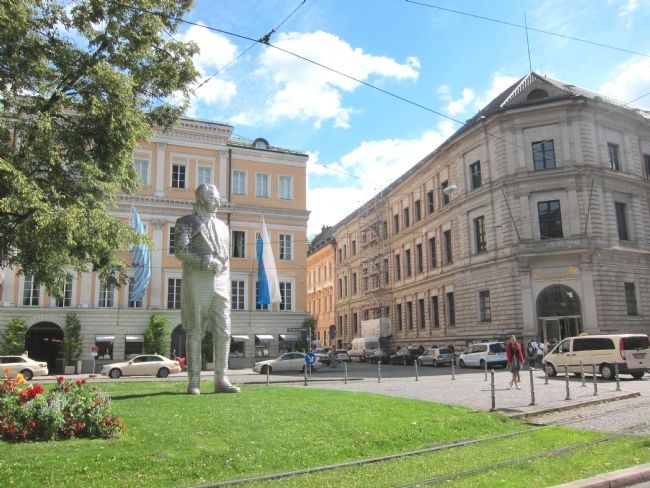