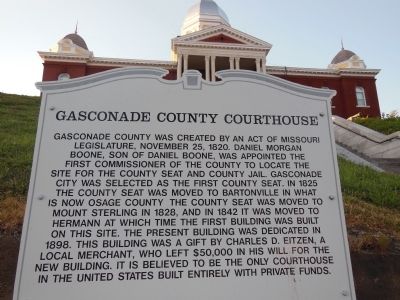 Gasconade County was created by an act of Missouri legislature, November 25, 1820. Daniel Morgan Boone, son of Daniel Boone, was appointed the first commissioner of the county to locate the site for the county seat and county jail. Gasconade City was selected as the first county seat. In 1825 the county seat was moved to Bartonville in what is now Osage County. The County seat was moved to Mount Sterling in 1828, and in 1842 it was moved to Hermann at which time the first building was built on this site. The present building was dedicated in 1898. This building was a gift by Charles D. Eitzen, a local merchant, who left $50,000 in his will for the new building. It is believed to be the only courthouse in the United States built entirely with private funds.

Topics. This historical marker is listed in this topic list: Government & Politics. A significant historical date for this entry is November 25, 1842. 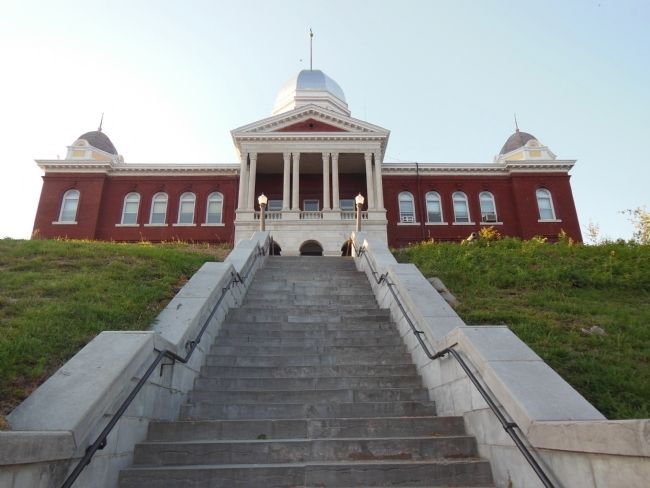 Click or scan to see
this page online
Marker is at or near this postal address: 119 East 1st Street, Hermann MO 65041, United States of America. Touch for directions.

Also see . . .
1. Gasconade County Courthouse. A gift to the county from Charles D. Eitzen, the courthouse was built in 1896-98. Architects were J. B. Legg, St. Louis, and A. W. Elsner, Jefferson City, who originally presented plans calling for a 143-by-88-foot building. The two-story courthouse had a finished basement and a dome that rose 120 feet. Originally, the building was to be constructed of light-gray or medium-buff brick with matching terra cotta trim. The main roof was to be dark Pennsylvania slate, the dome roofs of tin, painted a copper color. The rotunda and corridors were to be tiled in Italian marble and mosaic. Thirty contractors responded, but all bids for the Legg-Elsner design were too high. The architects then modified 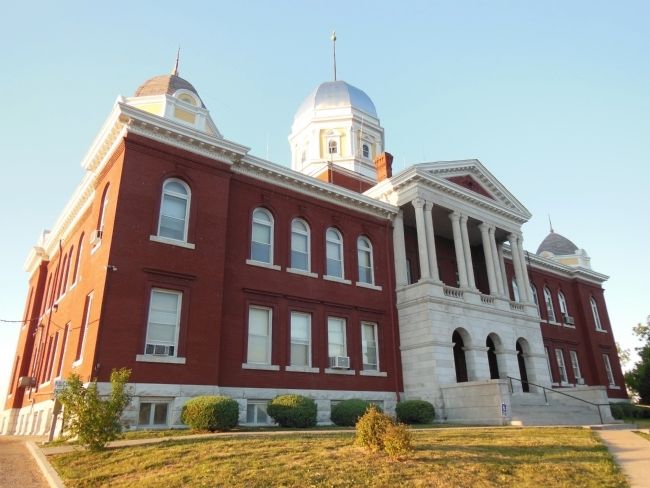 2. About Gasconade County. The time between the end of the Civil War and the beginning of World War I was a golden age of German culture in Gasconade County and in Missouri. Immigrants had become loyal Americans while raising their families and enjoying their German traditions, language and culture. First-generation immigrants maintained German as their dominant language throughout their lives, but second and third generation Americans attended schools where they needed to speak English and were gradually assimilated into the broader communities. Anti-German sentiment at time of World War I dealt a severe blow to the county’s German culture. A state edict forbade the use of the German language. Church services in German were phased out and were eventually replaced by English. Some towns even changed their names—Potsdam became Pershing, for example. Prohibition dealt the county an economic blow, especially in Hermann, where winemaking was a major source of income and employment. (Submitted on June 24, 2018, by Cosmos Mariner of Cape Canaveral, Florida.)
Credits. This page was last revised on December 16, 2020. It was originally submitted on August 24, 2012, by Cosmos Mariner of Cape Canaveral, Florida. This page has been viewed 425 times since then and 22 times this year. Photos:   1, 2, 3. submitted on August 24, 2012, by Cosmos Mariner of Cape Canaveral, Florida. • Craig Swain was the editor who published this page.
Share this page.