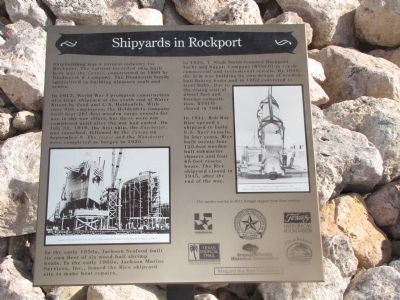 Shipbuilding was a natural industry for Rockport. The earliest recorded ship built here was the Connie, constructed in 1880 by Bludworth & Company. The Bludworth family specialized in building pleasure craft and scows.

In 1917, World War I prompted construction of a large shipyard at the south end of Water Street by Fred and C.A. Heldenfels. With over 900 employees, the Heldenfels company built four 281-foot wooden cargo vessels for use in the war effort, but these were not completed until after the war had ended. On July 31, 1919, the first ship, the Baychester, was launched, followed by the Zuniga on September 9. The Jasper and the Manchester were completed as barges in 1920.

In 1935, T. Noah Smith founded Rockport Yacht and Supply Company (RYSCO) to repair commercial and recreational vessels. Bu 1940, the firm was building its own design of wooden-steel hulls. Due to the rising cost of diesel 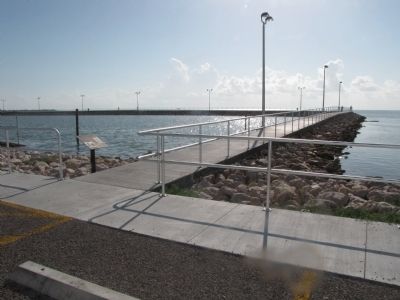 Photographed By Norman Frank, August 27, 2012
2. Entrance to Jetty - Marker is on left of entrance

Click or scan to see
this page online
fuel and foreign competition, RYSCO closed in 1986.

This marker erected in 2011 through support from these entities:

Topics. This historical marker is listed in these topic lists: Industry & Commerce • Settlements & Settlers. A significant historical month for this entry is July 1847. 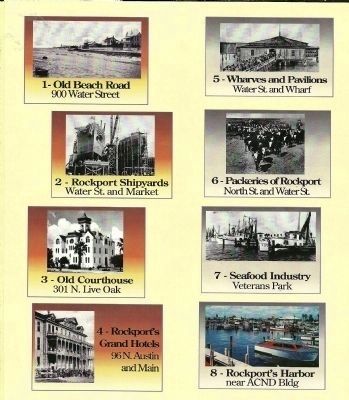 Photographed By Norman Frank, August 27, 2012
3. First Eight Signs for Rockport's Pathways to History
north on Water Street. Marker is at the entrance to the Jetty at the east end of E. Market Street approximately one small block east of the corner of E. Market Street and Water Street. Touch for map. Marker is in this post office area: Rockport TX 78382, United States of America. Touch for directions.

More about this marker. Park in the parking for the jetty. As you start onto the jetty, the marker is to the immediate left. Jetty is handicap accessible. 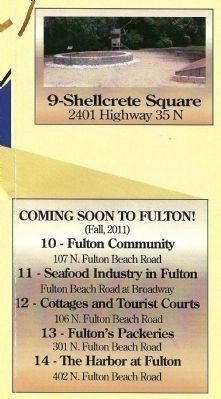