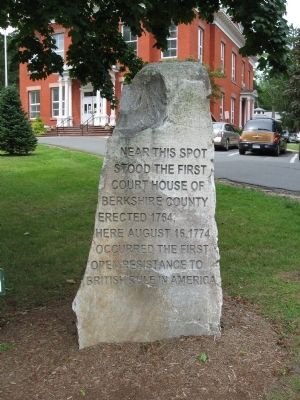 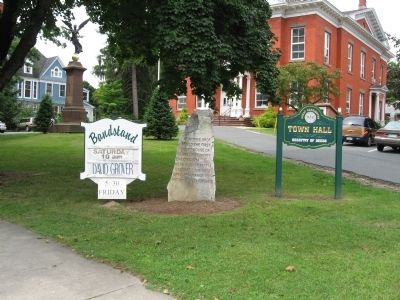 Regarding First Court House of Berkshire County. On August 16, 1774, the townspeople of Great Barrington assembled at the courthouse on court day. They locked the doors and refused admittance to Judge Ingersoll, a crown judge. Tradition says they dragged his cocked hat and powdered wig through the mud; placed him backwards on an old horse and rode him out of town amid jeers.
The next day the judge and his sympathizers attempted to regain entrance to the courthouse. He was arrested and jailed in Litchfield County, Connecticut. Leaving jail he returned to his home in Hartford, and then to England. No more courts answerable to the king were held in Great Barrington. Soon many courthouses in New England closed their doors to English demands, leading to the beginning of the Revolutionary War in April, 1775.
Credits. This page was last revised on June 16, 2016. It was originally submitted on August 30, 2012, by Michael Herrick of Southbury, Connecticut. This page has been viewed 560 times since then and 15 times this year. Photos:   1, 2. submitted on August 30, 2012, by Michael Herrick of Southbury, Connecticut.
Share This Page.