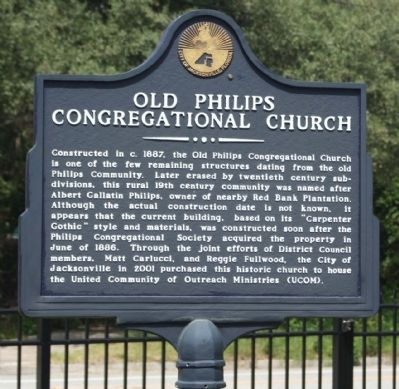 Constructed in c. 1887, the Old Philips Congregational Church is one of the few remaining structures dating from the old Philips Community. Later erased by twentieth century sub-divisions, this rural 19th century community was named after Albert Gallatin Philips, owner of nearby Red Bank Plantation. Although the actual construction date is not known, it appears that the current building, based on its "Carpenter Gothic" style and materials, was constructed soon after the Philips Congregational Society acquired the property in June of 1886. Through the joint efforts of District Council members, Matt Carlucci, and Reggie Fullwood, the City of Jacksonville in 2001 purchased this historic church to house the United Community of Outreach Ministries (UCOM).

Erected by City of Jacksonville Florida. 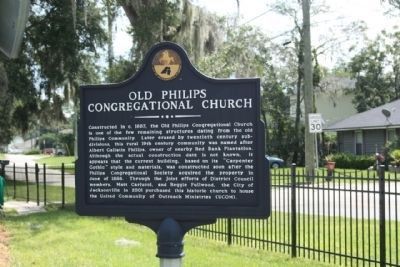 By Mike Stroud, September 2, 2012
2. Old Philips Congregational Church Marker
and Kingswood Road, on the right when traveling north on St Augustine Road. Touch for map. Marker is at or near this postal address: 3349 St Augustine Road, Jacksonville FL 32207, United States of America. Touch for directions. 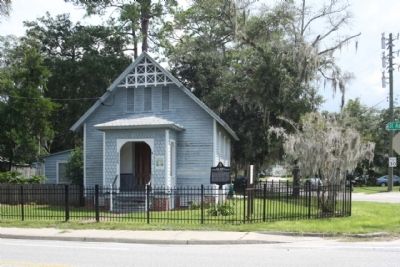 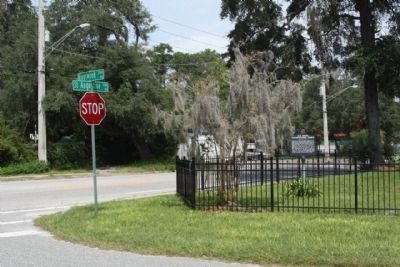