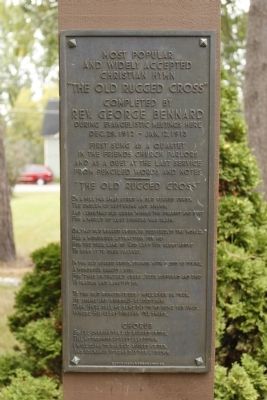 On a hill far away stood an old rugged cross,
The emblem of suffering and shame;
And I love that old cross where the dearest and best
For a world of lost sinners was slain.

Oh, that old rugged cross, so despised by the world,
Has a wondrous attraction for me;
For the dear Lamb of God left His glory above
To bear it to dark Calvary.

In that old rugged cross, stained with blood so divine,
A wondrous beauty I see,
For ’twas on that old cross Jesus suffered and died,
To pardon and sanctify me.

To the old rugged cross I will ever be true;
Its shame and reproach gladly bear;
Then He’ll call me some day to my home far away,
Where His glory forever I’ll share.

Chorus
So I’ll cherish the old rugged cross,
Till 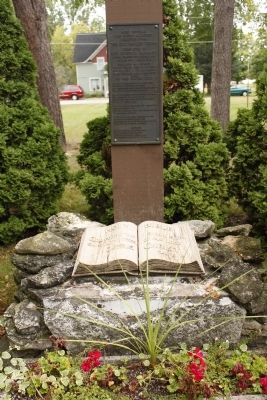 Click or scan to see
this page online
my trophies at last I lay down;
I will cling to the old rugged cross,
And exchange it some day for a crown.

Topics. This historical marker is listed in this topic list: Churches & Religion. A significant historical month for this entry is January 1853.

Related markers. Click here for a list of markers that are related to this marker. This list includes markers discussing the composition of the song "Old Rugged Cross". 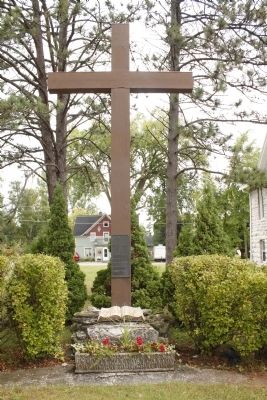 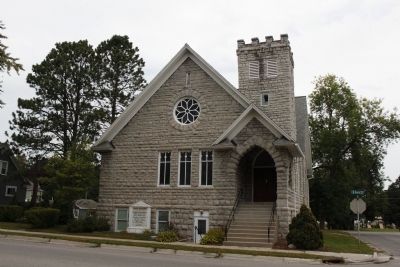